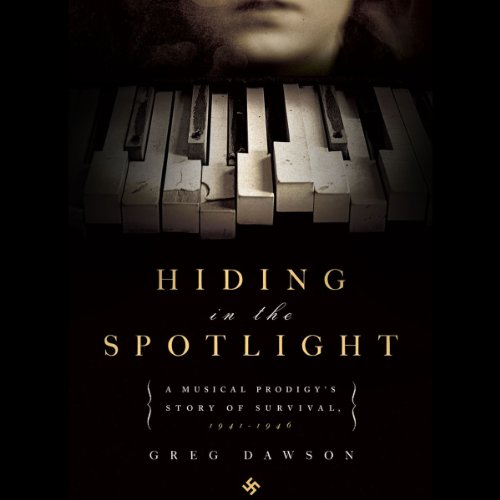 Hiding in the Spotlight

Be sure to keep the tissues handy when you're ready to listen to this inspiring, true story from one of modern Europe's darkest times. In the midst of all the violence and death caused by the Nazi army, comes the impossible story of a young musical prodigy and her will to survive. Hiding in the Spotlight, performed with a captivating delivery by veteran Suzanne Toren, is the amazing story of young Zhanna Arshankaya as she fled certain death and survived using her unparalleled ability to play piano.

The extraordinary story of a young girl whose musical genius saves her from the Holocaust.

By the age of six, Zhanna had developed a repertoire fellow students twice her age would envy. Scholarships to the most prestigious conservatories in the Soviet Union soon followed - conservatories that had produced legends like Rachmaninoff, Kogan, and Horowitz.

In 1941, disaster strikes. The Nazi Army is smashing through the Ukraine en route to Moscow. Zhanna and her family are to be executed alongside thousands of others in the ravines of Drobitsky Yar. A few short miles from certain death, her father bribes a nearby guard, and she escapes into the forest with only the clothes on her back, a copy of Chopin’s Fantasy Impromptu in her pocket, and her father’s parting words echoing in her head: “I don’t care what you do, just live.”

Adopting a new identity and ever fearful of recognition, Zhanna roamed the ravaged countryside. One lonely evening, the head of a local Nazi battalion hears her play. He is so taken with her exquisite interpretation of Chopin that little Zhanna soon becomes the performing darling of the Nazi forces.

What listeners say about Hiding in the Spotlight

We are blessed if we have purpose. The heroine of this story was given purpose. Her father was able to give her primary purpose for survival and a secondary purpose to move forward with her amazing talent. This is an amazing story about two teenage girls who survived not only the Nazi holocaust but also Lenin’s lies. To live with purpose enabled these young women to be survivors and live happy and forward thinking lives.

The story was captivating even for those not musically inclined. I also thought the narrators did an excellent job! Would recommend this book to others!

I have read many books about the Holocaust and I will definitely listen to it again. This book is different, the two sisters were never in the Holocaust, but it relates much history of what happened in Ukraine before WWII. The massacres in Babi Yar in 1932 and the atrocities of the Russians within their own people right before the war. These sisters were caught in the middle of all these events. Read/listen to it, you will not regret it!

a few details get repetitive in the last fourth of the story.... but who can resist a true bio from wwii of survivors and rare tenacity, skill, and natural gift. God bless them both, and Larry, for heroic human virtue.

Incredible story of survival & strength, music and ‘providence’ (for lack of a better word). The way the music aspects are described throughout the book made me wish I could hear them all play myself. I had to look up Charków on a map, I want to see these places for myself. What a story. It is one that needed to be told. Would definitely recommend.

The story is truly amazing. Author did superb job telling this story of his mother's survival. He made it personal but maintained a proper perspective.
Narrator did a good job. I appreciate her ability to do the accents without overdoing it.

This was an enjoyable listen about a music prodigy. I, personally am tone deaf, so the fact that this could keep me interested throughout the whole book says a lot about the basis of the story. There’s a wonderful story here that isn’t just music, or just the Holocaust.

This true story is at once terrifying and inspiring. In a time when the Holocaust survivors are few and conspiracy tales of the Holocaust being a hoax seem to be growing, this story is a must read or listen. The sisters tale of survival and determination is inspiring.
The narrator is absolutely spot on. A childhood friend had a happy, energetic, and opinionated grandmother who escaped Germany before the roundups. The narrator sounds just like her.

What a fantastic book and what brave brave sisters

The sisters were surely part of ‘the greatest generation’. So much tragedy in their young life. I rarely read of the Russians people in ww2.
Stalin seemed more ruthless than even hitler and everybody seemed to be hating the Jews. I also had to stop several times to go online to play some of the music the sisters played. Chopin and Liszt Brahms and more I learned about classical music and the genius behind it. I was sorry to see book end. Narrator so good too

I chose this book because I have a similar story in my family history. I felt the author was more concerned with painting a glowing portrait of his supposedly perfect mother than giving an authentic account. The writing is of poor quality lurching between different styles and viewpoints. Is it a novel, a very subjective biography, a historical account or a political rant from the perspective of a capitalist American? The writing changes abruptly from first person to third person with occasional third party interventions. Confusing. It feels like the book was built from the nostalgic ramblings of an ageing woman and we all know that memory is a fickle affair. I did not enjoy this book and couldn’t bear to finish it due to boredom and irritation.