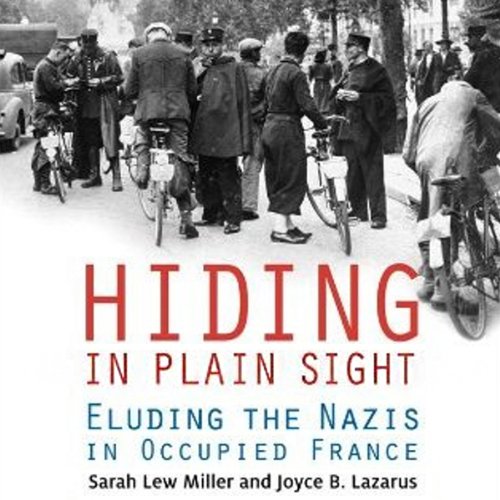 Hiding in Plain Sight: Eluding the Nazis in Occupied France is an unusual memoir about the childhood and young adulthood of Sarah Lew Miller. Born in a large Orthodox Jewish family in Dereczyn, Poland, Sarah's family moved to Paris in 1937 to escape poverty.

With the help of Christian neighbors, they evaded arrest for several years in Paris by living undercover beginning in July, 1942. After Sarah’s mother was arrested and then rescued, Sarah's parents went into deep hiding, while their eight children found refuge in rural villages scattered around France.

Through the help of a French Resistance organization, the Sixime, Sarah escaped to Switzerland in May, 1944 and her entire family was reunited in Paris after the Liberation in 1945.This personal and historical account of an era conveys the day-to-day life of a teenage girl living in Nazi-occupied France with the ever-present threat of death.

Despite her loneliness, hardships and the derailment of her childhood dreams, she kept her strong family ties and maintained her faith in humanity.

This memoir demonstrates the qualities of resilience and courage that enabled individuals and families such as Sarah's to survive.

By reliving one family's way of coping with a social and political crisis, we learn about ourselves and our own society.

What listeners say about Hiding in Plain Sight

3. This book was written on the basis of the memories of an adolescent. It's perhaps a book for young adults but too simplistic for adults. She's no Anne Frank

Another book on European history

1. Mispronunciation of French words/names (she could have checked the correct pronunciation easily)
2. Hearing her draw her breath before phrases (I had to set the speed at 1.25x to drown it out.

This needs to be classified as young adults book