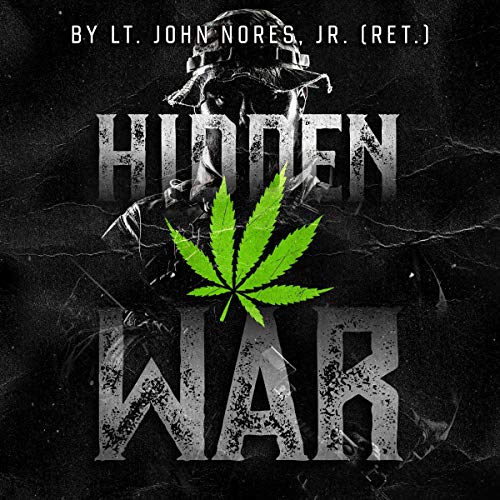 This isn’t a book about a conflict in a faraway country; it's a wake-up call.

While debates about border security continue to rage, and with stories about legal and illegal marijuana in the news daily, Hidden War forces an astonishing dose of reality into the public consciousness.

California game warden Lt. John Nores, Jr., now retired, has been at the forefront of an under-reported battle against thousands of Mexican drug cartel members who grow toxic marijuana on US soil, frequently on public lands, and sometimes remarkably close to population centers. Who would guess that this struggle is even going on, or that game wardens are on the front lines?

Not only does black market marijuana cultivation undermine legitimate growers, but it endangers lives. The cartels, armed and ready to defend their cash crop, pose a huge threat to hikers, hunters, bikers, bird watchers, and everyone else who enjoy public lands and wild places. Further, trespass marijuana growers divert waterways and use banned chemicals that render the plants toxic. And even after these criminals are long gone, they leave behind an environmental disaster that may never be fixed.

It's estimated that black market sales of marijuana comprise up to 90% of all weed sales annually. California is at the hub of this problem, and the effects reverberate across the US.

This is John Nores' personal account of his time leading the elite California Special Operations Marijuana Enforcement Team (MET). Hidden War brings to life the firsthand story of how America’s unsung heroes are fighting to keep our wild lands safe.

What listeners say about Hidden War

vary informative and eye opening. Well worth a listen for anyone who loves nature , our environment or even just the outdoors.

Crazy that this is going on in our backyard!!!

Written with great detail, but the detail is what made the book for me.

Bogged down halfway through.

Was very interesting but starts to run out of steam midway, he then gets really technical about equipment and it distracts from the story.

It was a very good book. Very informative and capturing. I'm currently in school to become a Conservation Officer here in Idaho and this book made me aware of so much that I had no idea happens.

from boyscouts to delta operators

this is an interesting story from LEO's perspective however its narrator gives often dramatic pauses so i recommend speeding up the reading. This story is very good about detailing the pursuits after often mexican narcos growing illegal marijuana in California but focuses a lot on their dogs. This story will make you look at game wardens differently. In my home state of IL. most game wardens often ruin a fishing/hunting trip or dont enforce any laws at all however this is not the case for patrols in California. Making this story very interesting to listen to, if you are interested becomeing a game warden or even Law enforcement officer listen to this book.

Another blue line leaning over glorification of our wasted tax dollars. The sound of facts made a bad story worse they were corny to say the least.

I liked the information and perspective. The writing was almost story like except it had numerous grammatical errors and towards the end the writing got lazy. A thesaurus might help, especially for the word cumulative.

Too many small details

Seemed like a lot of unnecessary information. Could have done without the music in the background. The book had a lot of potential but the immense amount of small details of the operations just made it seem like the author was trying to make everything they did way more badass than it probably was.

Never would have guessed

loved it... great look into an often overlooked war here at home. an eye opening experience

quick finish, great storytelling. john nores puts you on the ground, making you live these encounters.