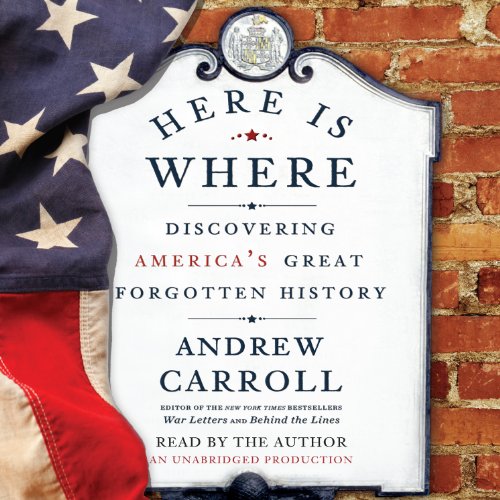 The centerpiece of a major national campaign to indentify and preserve forgotten history, Here Is Where is acclaimed historian Andrew Carroll’s fascinating journey of discovery in which he travels to each of America’s 50 states and explores locations where remarkable individuals once lived or where the incredible or momentous occurred.

Sparking the idea for this audiobook was Carroll’s visit to the spot where Abraham Lincoln’s son was once saved by the brother of Lincoln’s assassin. Carroll wondered, How many other unmarked places are there where intriguing events unfolded - or where extraordinary men and women made their mark? And then it came to him: the idea of spotlighting great hidden history by traveling the length and breadth of the United States, searching for buried historical treasure.

In Here Is Where, Carroll drives, flies, boats, hikes, kayaks and trains into the past, and in so doing, uncovers stories that inspire thoughtful contemplation, occasional hilarity and often, awe. Among the things we learn:

Featured prominently in Here Is Where are an abundance of firsts (including the first elevator, the first modern anesthesia, the first cremation, and the first murder conviction based on forensic evidence), outrages (from massacres, to forced sterilizations, to kidnappings) and breakthroughs (from the invention of the M-1 carbine to the recovery of the last existing sample of Spanish Flu to the building of the rocket that made possible space travel).

A profound reminder that the ground we walk is often the top sedimentary layer of amazing past events, Here Is Where represents just the first step in an ongoing project that will recruit citizen historians to preserve what should be remembered.

"Carroll takes readers on an eye-opening and entertaining grand tour of America in this lively exploration of lesser-known or overlooked historical sites. From birthplaces to gravesites and high points to low, from those that inspired inventions to those that sparked change, he leaves no stone unturned or landmark unvisited.... Part travelogue, part history, this book should be required reading for anyone interested in America's past." ( Publishers Weekly)
"Andrew Carroll has always been a top-notch editor. I had no idea he was as fine a storyteller.... Great storytelling can be wonderfully addictive. Here Is Where captured me completely - I couldn't put it down." (Jeff Shaara, New York Times best-selling author of Gods and Generals, Last Full Measure and Blaze of Glory )
" Here is Where is remarkable for the painstaking research on display and its yield of rescued-from-obscurity stories. Many of the true incidents Andrew Carroll has uncovered aren't just surprising but powerful.... Others are simply laugh-out-loud funny, but all are described with considerable skill. America has always had among its citizenry a number of individuals whose legacy is immense but unappreciated, and Carroll has truly done them justice." (Steven Pressfield, best-selling author of Gates of Fire, Tides of War and Killing Rommel)

What listeners say about Here Is Where

A Man who Loves his Country

This book is proof of the interconnectedness of people. The author truly loves his country, his history, and people in general.
I laughed and cried in places. It's not a book I wanted to read in one sitting, but could pick up and put down when I wanted something interesting to read that wasn't too brainy.
While the author is a gifted writer, able to describe in an accessible style the good, the bad, and the bizarre of humanity, he is less gifted as a narrator. He inunciates well, but does not emote well at all.

Well worth your time, money or credit.

I wish it was taught like that in school

The book was very good. Every event is so intermingled with others it truly shows how history happens in real time.

great book. I read the hard copy and then bought this to listen while on a road trip. such a great story and I love how he ties it all together

Terrific individual stories. Inspiring and fun. As a history teacher, I can recommend this unique book. A little reminiscent of Blue Highways.

Great for a Bill Bryson fan

Where does Here Is Where rank among all the audiobooks you’ve listened to so far?

there's something about a slightly dry, meticulously researched text that works really well for me on audio. I'd put this pretty high, as I certainly think I'll be listening several times. The information is so densely packed that I'd be sure to get something new from the book each time, no matter how many plays I gave it.

No, but I don't see why a book only lasting one sitting would be a good thing! I listened to it in bits - on train journeys, and as I work at home. In this way it has lasted me a week or so, and I've still not finished my first listen.

I was looking for something Bill-Bryson-esque as I have exhausted the man's back-catalogue. I particularly love the way he deals with the minutiae of history - and how apparent minutiae often turns out to be far more significant to world events than would have been guessed (see At Home, particularly).So as soon as I spotted Here Is Where on Audible's History front page, I was pretty sold. A quick preview was enough to convince me the tone wasn't boring or frustratingly badly phrased.Comparisons to Bryson are a bit unfair, because there's no suggestion that Carroll is trying to emulate him - they just operate on similar territory (they even quote from many of the same sources and take interest in similarly little-known areas). Carroll does not have a background in comedic writing and while his tone is light and engaging (and once or twice quite chucklesome) he does not write with the wry tone that I love in Bryson.However, his writing is still lovely to listen to - his humanity and deftness of phrase manage to convey the stories herein with pathos (though never sentimentality), outrage at injustice, sympathy and amusement by turns. The figures he paints linger in the memory because he is good at conveying their characters without over-labouring the exercise.I found the 'travelogue' elements of the book less successful. while it was interesting to hear about present-day memorial and remembrance (or more usually lack thereof) in contrast with the extraordinary histories described, a lot of the detail of his endeavours often felt a little pointless and distracting. There wasn't enough travelogue stuff to give you a sense of his parallel narrative, but there was too much to serve only as a little background colour. The eye for the unusual or quirky or interesting he applies successfully to historical events is missing from accounts of his own experience (and from the sound of it his travels were largely uneventful anyway) so whereas the people in his historical accounts are fascinating, the people he meets are all just forgettably nice. I was glad he encountered such helpfulness but wasn't sure why I needed to hear about it outside of an acknowledgement page.I wasn't sure the structure worked brilliantly in the middle section, either, where he grouped all the stories of medical breakthough. After two or three such stories the effect was rather repetitive. Similarly, the first section focused on the more tragic and unjust episodes, and coming one after another like this gives the book a overwhelmingly gloomy start. I would have preferred the stories not be arranged by 'type' in this way, but intersperesed with each other, to keep the tone a bit more lively and variedBut those are really minor critisisms, and probably just personal preference. Carroll wrote a great book, and reads it very well for audio as well.A definite recommend from me!