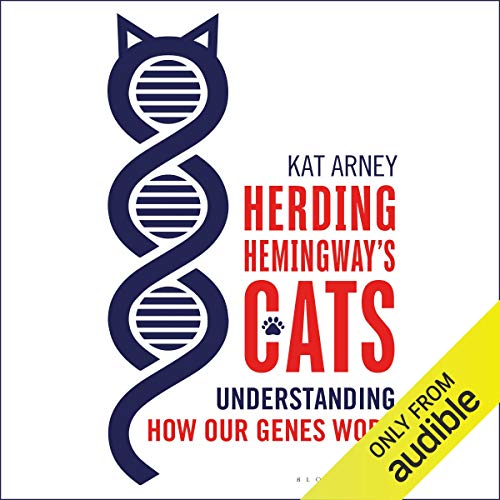 The language of genes has become common parlance. We know they make your eyes blue, your hair curly, or your nose straight. The media tells us that our genes control the risk of cancer, heart disease, alcoholism, or Alzheimer's. The cost of DNA sequencing has plummeted from billions of dollars to a few hundred, and gene-based advances in medicine hold huge promise.

So we've all heard of genes, but how do they actually work? According to legend, Ernest Hemingway was once given a six-toed cat by an old sea captain, and her distinctive descendants still roam the writer's Florida estate today. Scientists now know that the fault driving this profusion of digits lies in a tiny genetic control switch, miles away (in molecular terms) from the gene that "makes" toes. And it's the same mistake that gives rise to multi-toed humans too. There are 2.2 meters of DNA inside every one of your cells, encoding roughly 20,000 genes. These are the "recipes" that tell our cells how to make the building blocks of life, along with myriad control switches ensuring they're turned on and off at the right time and in the right place. But rather than a static string of genetic code, this is a dynamic, writhing biological library. And figuring out how it all works - how your genes make you, you - is a major challenge for researchers around the world. Drawing on stories ranging from six-toed cats and stickleback hips to wobbly worms and zombie genes, geneticist Kat Arney explores the how our genes work, creating a companion to the book of life itself.

Excellent narration makes this an interesting and informative book. I am inspired to learn more.

the narration, interviews and topics in this book are fantastic. definitely recommend! Kat's accents that she puts on are hilarious 😂

Loved it. It really simplified the concept of genes in my mind. I recommend this book

Great overview of basic genetic concepts, would recommend to all university students studying the subject. Only issue was the author attempting the voices of the people she interviewed, accents and all. It made it a bit difficult to listen to in places but on the whole it was excellent.

People who want outdated information, who don't mind the unnecessary use of 5-dollar words to explain what many other truly intelligent authors have given us. She revels in her trips to talk to to famous researchers, her descriptive passages are cloyingly engulfed with the cocky pride of her accomplishments. Pass the barf bag.

Did Kat Arney do a good job differentiating all the characters? How?

No characters - it's NONFICTION

Anger. Disappointment. Disgust. I literally batted my iPhone across the room in disgust (I have a great case - no worries). Total waste of money.

The author needs to know that her works is outdated and provides much incorrect information. I literally had JUST finished another book about genes written by an actual doctor in the midst of genetic research. Thought this book would be a great followup to that. I was wrong.

The front lines of research

Interesting overview of research into the many subtle variables affecting gene expression and regulation. While celebrating how far we have come, the author resists neat conclusions and shows how much we still have to discover. I particularly liked the chapter on Stickleback hips. For the narration, I didn't care for the bad accents but understand that the narrator was often quoting her colleagues directly.

Exceptional book that does a great job of demystifying genes. The narration by the author is very engaging

This a very complex story told in an engaging manner It does require your serious attention if you wish to learn something,

Excellent in depth look at genetics

Great book, excellently narrated. Goes into genetics in quite a bit of detail - so not for a reader who knows nothing about biology - but pays off nicely for those with a little bit of knowledge in genetics.

This is a great read, the author takes you on her journey of discovery in understanding genes. It's easy to follow and the examples given are easy also easy to understand and imagine.
I highly recommend this book

Excellent, and easy to understand.

Even when I was studying genetics as one my subjects at uni, it was not an easy subject to grasp. This book, blows that out of the water. It is jovial dance upon the subject, putting it in an easy to grasp manner that most people could understand.
If you only ever buy one book on genetics, it must be this one. Kat Arneys enthusiasm and passion for the subject, shines through. A great listen.

I loved this book! I last did genetics in the late 1970s, when it all seemed so simple. Yet much has happened since to show us it is anything but, so this book was a great eye-opener for me! One early chapter has a German researcher, head in hands, despairing of the impossibility of us ever understanding it all. Yet Kat Amey, herself a researcher, uses some brilliant and humorous metaphors to explain this complexity so clearly.

The title comes from the alleged fascination of Hemingway with 6 toed cats, which turns out to have important genetics implications, combined with the seemingly impossible task the cell achieves transcribing and translating the meandering diaspora of coding regions (~5%) in the genome - like herding cats. Amey uses the metaphor of an untidy garage - full of unsorted junk, that never got chucked away, mixed in with really important stuff - like the car or the lawnmower. In fact coding genes come more like bits of the car, strewn about the genome, needing to be copied and the RNA copies reassembled before it can be used i.e. translated into usable protein.

That's just the DNA, which according to another researcher is "boring"! The real fun starts with RNA: microRNA, iRNA, looped RNA are just some of the many mysterious forms explained in the book. It helps if you have some background in Biology, but her explanations and analogies are so good, no prior knowledge is necessary.

Read beautifully, with wit & humor, the explanations are interspersed with interviews with leading researchers, who themselves are interesting characters. She employs a healthy degree of scepticism about their work, as well as the old orthodox beliefs of Biology that are daily being challenged by their findings.

Overall, this is a delightful listen, and about a field of study that is burgeoning as we speak. While there are many books on Particle Physics, Quantum Mechanics or Relativity, there are relatively few on Genetics. This book is a rare gem.

Kat Arney casts herself well as both advocate and party pooper in the quest to open up the world of the cell and the gene. She has the healthy scepticism of the professional real world lab scientist, a world she knowable and acknowledges that she feels most comfortable in. Too frequently we hear newspaper or TV hype around this field in a frenzy of "New DNA breakthrough" or genes-as-saint-or-sinner discourse. Kat makes it very clear that we have a lot to learn and although there is a lot of promise, there is SO much we don't yet understand.
I would openly challenge whether there was actually any need to recount the content of the interviews in accented impressions all the time. At worst it was distracting, and this was content that I didn't want to be distracted from. I could have forgiven,and probably enjoyed, the occasional drift into Floridian or Californian soundtrack to emphasize a quirk or bon mot, since it suits Kat's highly engaging style to bring the interviewees to life. I was finding myself relieved when certain recollections were over and in a work which was a series of interview accounts strung together by editorial, this wasn't the intention I think.
I'd recommend Kat's work to anybody interested in this vital field, along with her wonderful podcasts.

An interesting and thought provoking book, presented in a most accessible format. I was alternately amazed and amused (and most often, both). I look forward to more!

I'm greatful for a great, popular explanation of the genome by a scientist. As a person who deals with scientific texts in routine, I know how valuable concise, yet intellectually honest texts are.

It is written like a bad school essay more interested in describing characters and situations than the actual subject. Really frustrating to listen to. After one and a half chapters I could not stand any more.

It's rare for an author to be the best person to narrate their own books, but Kat Arney nails it. Her enthusiasm and her intelligence shine through, and she makes complex processes and concepts easy to understand. This book is one of my favourites this year and my understanding of the molecular genetic processes has been greatly enhanced. It was a joy to listen to and I now look forward to getting other work by her.

Fascinating , well presented information. A great overview of the developments in this area of science.