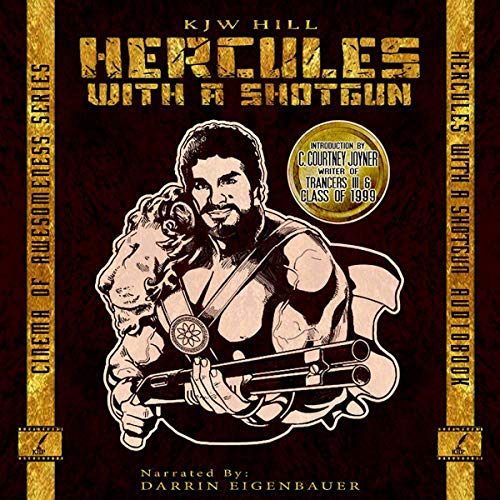 Hercules with a Shotgun

Hercules, the legendary son of Zeus, has beaten all the monsters in the universe. In doing so, he has garnered enormous amounts of fame and fortune. Retiring to his island getaway, he is content to bask in his celebrity and do as little as possible. That is until a new monster comes to earth looking for trouble, Zeus and his godly brothers get booted out of Olympus, and the squad of showboats Herc left behind to handle the publicity are annihilated.

Hercules is forced to get back into the fight, only to discover there is something missing, said something being his supernatural strength.

From the author of DeathMaster: Adventures in the 39th Uncharted Dimension and Retirement Village of the Damned comes one of the lesser-known adventures of the champion of Olympus.

Listen and discover whether the mighty son of a god can best the forces of evil once more...with a shotgun?

What listeners say about Hercules with a Shotgun

You know you're in trouble when Herc is packing

The story is pretty short, just over an hour, but it is worth it for the giggles and visuals that Hill provides. If you are looking for a quick dip into doofy fun and B-movie magic then go no further. I totally envisioned Lou Ferrigno as Hercules as the book went on, and it worked pretty well for me. I almost wish that Eigenbauer had given herc a slight speech impediment, that would have made it perfect for me. He does a good job on the narration, and was a solid performer. Either way this is an Amuse Bouche, a small tasty bite that fulfills a little need you didn't know that you had. Not something that you will want to miss out on. I can't wait for Hercules with an Uzi, or even a Bazooka as a follow up.Hmmm, maybe Thor with a Chainsaw would be a better follow up. Kent Hill could not only pull it off, but he'd make you BELIEVE a god of thunder could cut of limbs with an enchanted Black and Decker. Even though I did receive a promo code for this review it in no way influenced my considerations of the material, and in fact, inspired me to be more honest. Getting a code generally makes me harsher as a reviewer as I am more often concerned what someone like Me will decide based on my review.

Not sure I've ever listened to a story that had such a great mix of entertaining story and over the top humor. I loved every second of it!
Kent Hill has done something pretty amazing, making me laugh until my jaw aches and keeping me interested in the characters and what's going on at the same time. It would be cool to know these characters more (my mental health is just fine, move along)
The Only down side to this story is that it ended. Like all good things, it was over too soon. I will be back to listen to this story again and Kent Hill has found a life long fan!
So refill your (insert favorite beverage) grab a lil' snack and dig into one of the most novel novellas in the history of ever.

This book is as awesome as the title character

think of muscle beech and the add some mega shark and scorpion things with a dash of I have had enough of this sh*t. you get Hercules with a shotgun the only down side if you can call it that is you are left wanting more I really do hope there is more to come.