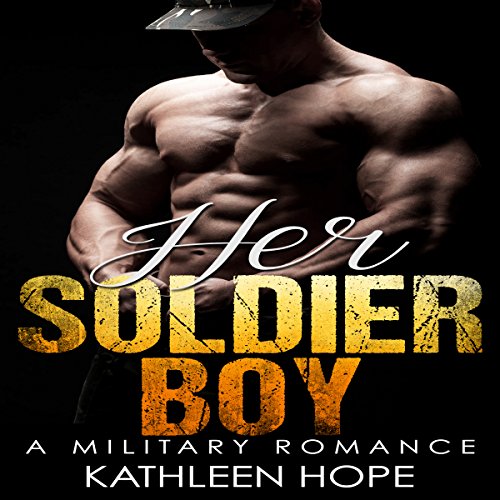 I looked up to see the guy Shaquanna was referring to. He was the same guy who'd been coming into the coffee shop where I worked as a waitress every day. I didn't think anything of it. He was probably new in town or just passing through.

He shuffled in and sat down in a booth near the window. He carried a green duffel bag that he dropped on the booth seat next to him. I figured he must be military because his green looked Army issue. I took a moment to study him. His medium brown hair was thick and in need of a haircut. Dark stubble marred his jaw, and from this far away, I couldn't tell what color his eyes were.

"He's sitting in your section, Regan. As usual." Shaquanna grinned suddenly. "Why, I think you got yourself a secret admirer," she said in a fake southern drawl. She gave the man a closer look. "Your mystery man could seriously use a shower, shave, and a haircut..."

What listeners say about Her Soldier Boy

“I was voluntarily provided this free review copy audiobook by the author.

This genre of book is outside of my usual comfort zone but being a military spouse I was intrigued by the title of this book and felt the need to 'read' it.

I found that the story doesn't have much of a plot however regardless of that it was certainly a good listen.
It follows the lives of a waitress/art student and a marine.

It was a feel good story and I enjoyed it.

As for the narrator, I was slightly disappointed. It was clear that the narrator was reading a book as opposed to telling a story.

Overall though, it was quite enjoyable.

I would definitely read more from this author :)

Good premise but with some flaws

Regan falls for a soldier, Daniel, who returns from war damaged. Regan is a kind and practical person who tries to help Daniel work through his problems. The problem I have with the story is that it feels disjointed. At the start of the book we learn about Regan’s passion for boating, but nothing about it after that. Also there were times when the writer used the term “again”, so I thought I’d missed something earlier, but it was the first time the situation was happening. Also the narration is not that strong so it added to a less than ideal audiobook.

I received this book for free in exchange for an honest review.


I throughly enjoyed the story. This man, this soldier comes back from hell, to grief and pain and loneliness he doesn't know what to do or how to feel.

He has lost everything important to him so he doesn't trust easy but Regan really is what and who he needs to be the man he was always meant to be.

I just loved that the story was about hope and what can happen if you let it.

I very much enjoyed that she needed someone too and he was who she needed him to be as well.

Not a fan of the narration I have to say, I don’t know what it is maybe that she sounds almost robotic and I don’t feel the emotion. I like her man voice the best.

*Given for honest review.*
*You don't have to like my review but its 100% my opinion, and I am allowed to have it.*

I got this ARC via audiobook boom. The narrator was perfect and the book was well developed. The HEA happened almost at the beginning which is a good way to start. Daniel is a wounded soldier who falls for a waitress who is also going to college for art. Flo an older waitress doesn't like Daniel and tries to break them up. The other twists we're interesting and made the story fun. Flo and Daniels Xwife were mean but that didn't change the love story. Worth a credit.

What a nice story. If you are looking for a pleasant love without a ton of angst then this one is for you. The writer did a good job on her characters and I felt like I really got to know the hero the most. That being said, I think I would have preferred reading this one as compared to listening to it. I felt like the narrator just didn't capture the emotion in the story which in turn made it harder to connect with the characters. You will like the story and should definitely get it, just in written form. I was provided a free copy of this book in return for an honest review.

NARRATION WAS KIND OF FLAT, BUT LOVELY STORY!

Daniel comes home from service so damaged...and Reagan just wants to be there for him to be with him, but they have so much negativity stopping this that it is so heart wrenching...I think this would be one to read in print...IDK what happened to this narrator.I have listened to her before and it was ok...this time it was ind of cold and flat....but I do like KH's wrinting and I like that we got a HEA!!!

I received this audiobook free for an honest review. I thought this was a good book. Not great, just good. The author did a good job of developing the characters. I could see the handsome Daniel in his military uniform and Regan in her waitress uniform. There were times in the book that I figured Daniel and Regan were not too smart. If Daniel wanted his son back so badly, he could have gone to the military for support. That was not even addressed. I thought the romance did not have a lot of detail. It seemed pretty shallow. I don't know how to describe it, but I didn't fall in love with the characters and didn't really see a deep love between them either. The only character that had personality was Flo. Loved her. It was a good first book for the author. The narrator was okay. At least she wasn't unbearable.

This audiobook was given to me for a honest, unbiased review. This was a sweet read, but very confusing, Marine or solder or Officer, need to pick one and stick with it, there is no interchanging them, that is insulting to them. other then that, this was good, could have had more of a bad guy problem, but a sweet read.

Daniel's a great guy with emotional scar's that run deeper than his physical scar's.
Everyone around him (except for Regan) judge him for what's on the outside.
Can the one person Daniel opens up to heal his heart?
Another obstacle for this couple is the negative people that surround them.
You'll have to listen to the book to see if they over come the hardships and get their HEA ending.
For those of you who like clean romance with PG rated intimate scenes...
this book delivers it.
The narrator Theresa Stevens wasn't necessarily bad but... she definitely lacked the ability to bring out the emotions needed for certain situations.
I have no doubt some of you out there will enjoy this read if you are looking for something sweet and light.
I was gifted this book in exchange for my honest unbiased review.

I like this book. I will read more by this author. I love the read.

Where does Her Soldier Boy rank among all the audiobooks you’ve listened to so far?

Soldier boy ranks quite high among the audio books I have listened to. It is the only one I have read that is about an injured soldier who is so cruelly treated by those who should be his loved ones. I will look out for other ones now I have come across this one. They will probably be as hard to read as this one was. So thought provoking, why are people so cruel?

I was moved by all the interaction with Daniel, my heart grieved for him. His suffering was so immense and he did not deserve any of it. The scene at his ex wife's house where she harangued him and accused him of not saving two of his men was harrowing to say the least. His meeting at the park where he said goodby to his son, the little boy instinctively knew what a good man Daniel was.
This was a beautiful book a real tear jerker. So many horrible people and one beautiful girl with a shining soul who saw the matching soul in a broken man and brought it back out to shine again.