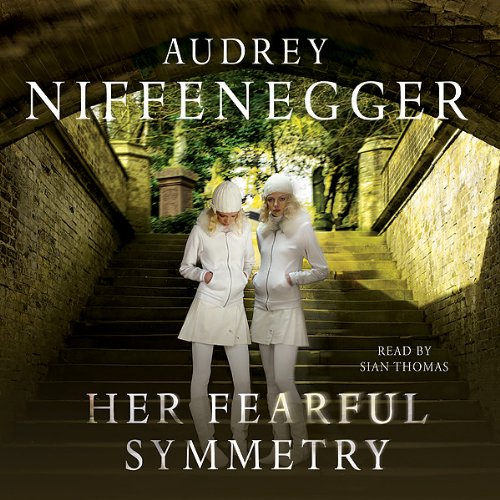 At last ---another brilliant, original and moving novel from the author of The Time Traveler's Wife.

I told you I would let you know - so here it is - goodbye.

I try to imagine what it would feel like if it was you - but it's impossible to conjure the world without you, even though we've been apart so long.
I didn't leave you anything. You got to live my life. That's enough. Instead I'm experimenting - I've left the whole lot to the twins. I hope they'll enjoy it.

Don't worry, it will be okay.

Say goodbye to Jack for me.

Julia and Valentina Poole are normal American teenagers - normal, at least, for identical 'mirror' twins who have no interest in college or jobs or possibly anything outside their cozy suburban home. But everything changes when they receive notice that an aunt whom they didn't know existed has died and left them her flat in an apartment block overlooking Highgate Cemetery in London. They feel that at last their own lives can begin...but have no idea that they've been summoned into a tangle of fraying lives, from the obsessive-compulsive crossword setter who lives above them to their aunt's mysterious and elusive lover who lives below them, and even to their aunt herself, who never got over her estrangement from the twins' mother - and who can't even seem to quite leave her flat....

With Highgate Cemetery itself a character and echoes of Henry James and Charles Dickens, Her Fearful Symmetry is a delicious and deadly 21st-century ghost story about Niffenegger's familiar themes of love, loss, and identity. It is certain to cement her standing as one of the most singular and remarkable novelists of our time.

"The incomparable Sian Thomas gives Elspeth the husky, sexy voice of Joan Greenwood, and throws in a guttural Dutch accent, several distinct posh English ones, light young American girly tones, a mid-Atlantic middle-aged female and, for good measure, a walk-on part for Nigel, a Brummie. Her reading is irresistible."( Independent on Sunday)

What listeners say about Her Fearful Symmetry

Loved the Narrator, a perfect choice

If you could sum up Her Fearful Symmetry in three words, what would they be?

Julia's final scene but I don't want to drop a spoiler

Once crucial aspect of the story irritated because of the real world logistical problems but the after life that Audrey Niffenegger created was whimsical and lovely. I loved the characters.

What disappointed you about Her Fearful Symmetry?

This has to be one of the most silliest and futile works I have come across. After 2 hours I was getting fed up but persisted to listen as I thought this should hopefully better. After 4 hours in just couldn't anymore!

Nothing written by Audrey Niffenegger

The narrator is excellent! Very talented

What disappointed you about Her Fearful Symmetry?

I was left wondering what happened and did not believe the ending. Maybe it was because this was the abridged version.

What was most disappointing about Audrey Niffenegger’s story?

Have you listened to any of Sian Thomas’s other performances before? How does this one compare?

No but Sian was spectacular! I would happily buy a book just to hear her again.

What character would you cut from Her Fearful Symmetry?

I'm not sure, it was not the characters that were disappointing.

I loved the time travelers' wife. It is one of my all time favourite books and I have listened to it about 30 times. I was so looking forward to another of Audrey's books and this one, although quirky (but that is Audrey's style), was going well until that ending.
I will now wait till Audrey's next book to see if I remain a fan of hers. Thanks for the opportunity to rate books.

I loved time travellers wife; this book I downloaded without realising it was the abridged version, and unfortunately even though the story was good it just did not work for me in this short format, my advice wait untill the full version is available.

I loved this audio book as much as the time travelers wife. Wonderfully read too, but a shame it been abridged nevertheless it was still fab.

I absolutely loved this story, this author has a very unique style that just captivated me from the start. Its an imaginitive story that i just couldnt wait to get back to at every available minute. Its a sad tale of love, deceit, death and the afterlife that involves a number of different characters whose lives all cross paths at some point and the effects that they have on one another. I dont want to give anything away about the story but if you liked the time travellers wife you wont be disappointed with this story. Cant wait for her next book.

Abridged version - they've left out too much

I kept waiting for the story to finally begin, but it never happened. When you abridge a book and gloss over this much detail, the whole story will seem like it's merely the introduction.

The story is like a movie paraphrased. It is more like describing a series of events. There is very little other things that I like in books such as an insight in how the characters feel or think or some ideas that make me think about my own life, about awesome things about human behaviour or about philosophical questions, etc. The actions are entertaining as there are some unexpected turns and there is a ghost who does some cool things. However if you want more in a book than just a series of events, this book is not really for you.

Excellent, but a shame it wasn't unabridged.

Excellent audiobook that could have only been improved if it had been unabridged. There were points that I certainly felt were lacking some detail. Narration was outstanding though.

I loved the quirkyness of the Time Traveller's Wife - and this is similarly bizarre as the story unfolds. It is beautifully read, with really distinctive voices and accents but it is trying to second guess the story that makes it so appealing - and the added layer of darkness and menace really gives the story an edge. Very easy listening - my only criticism was it was relatively short

Another gripping novel from Ms. Niffenegger

I loved 'The Time Travelers' Wife' and so was excited to find Ms. Niffenegger's latest novel on Audible. Superbly read by Sian Thomas, I found the book gripping and finished it all too quickly. Multi-stranded with interesting characters the book provides some insight into what must be like to be an identical twin. The supporting characters were of no less interest. I thoroughly enjoyed the book and was sorry to finish it so quickly.

Loved this audio book... just wished it was longer.. As good if not better than Time Travellers Wife. Looking forward to the next ones...KEEP IT UP :)

I chose this as I LOVED The Time Traveller’s Wife by Audrey Niffenegger . The narrator’s voice is lovely I thought I’d just drift off. However I was gripped. I’ve lived in flats in London and Visited Highgate Cemetery so that really made me want to find out more about the lives of these people. The end? Not quite resolved I thought. That’s why I’ve given it 4 not 5 stars. Interested to know what others think.