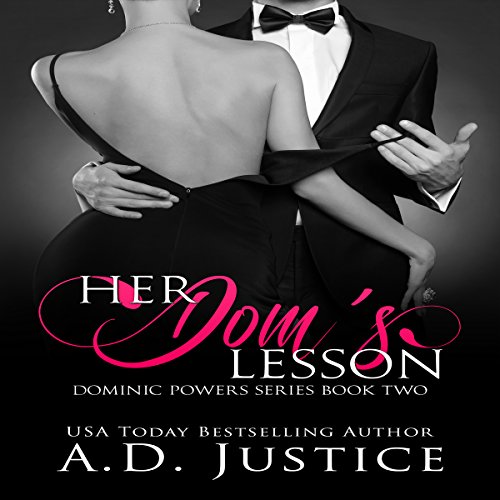 Will he ever forgive me? This question haunts me every day and night. He branded me with his touch to the point that no other man will ever compare.

Dominic consumed my life. Until the day he learned the truth about me and everything changed. Nothing is as it seems and it has all spiraled out of control. The weight of the world now rests on my shoulders.

I have to fix this.

Some say that karma is a bitch. I can say from experience that a betrayed dom is much worse than a bastard ever thought about being.

They think they played me. I denied the man inside me his rightful place and was mistaken for a fool. When I'm done with them, they will feel the lash of her dom's lesson.

What listeners say about Her Dom's Lesson

We pick up right where we left off with Her Dom and the ride continues to buck wildly from that point on.

Sophia is flailing in the wind and Dominic is full of vengeance. I thought the storyline flowed so smoothly and I had a pit in my stomach wondering how things would go.

Although again, Rita Rush just wasn't the right fit, I know I will still listen to Her Dom and Her Dom's Lesson many more times. Robert Coltrane is perfection and he is the majority of the narration and is able to suck me back in every time.

Audible review. Dual POV. Book 2 in the Dominic Powers duet. I really enjoyed the duet style narration I just wish the narrators were different. Again the intro and finalé music was completely unnecessary and irritating. Rita Rush's narration isn't muffled in this audiobook but it is very childlike and whiny. This portion of the duet specifically points out that Dominic has a Texas accent but Robert Coltrane made no attempt at it while he did adopt an Hispanic accent for 2 other characters. Neither narrator fit their main character. Trigger warnings: Sophia is set up by Shawn (her brother) to meet Harrison (her ex); Shawn is murdered by Darren (Dominic's employee); Harrison is killed in defense of Sophia by Dominic after Harrison reveals he killed Carol Ann (Dominic's ex/Harrison's sister); Sebastian (the son of the leader of a Mexican cartel) is killed in self-defense by Dominic; Darren reveals he was the mastermind behind the attempts on Dominic then attempts to kill Dominic but misses and shoots him in the shoulder; a bit of BDSM.

Dominic Powers & Sophia Vasco are apart at the beginning and the story goes back and forth in time quite a bit. Sophia finds out she's pregnant; the entire plot between Harrison and Sophia is revealed; Darren's diabolical plot is revealed; Sophia and Dominic get back together and are married with a son at the end. JP

It just stopped making sense. There's a fake lawsuit and she can't figure out a way to tell him. Wow! A note, an email, a phone call, smoke signals... duh! I can mention 300 other ways to tell him.

Boy, he dumps the love of his life in a heart beat. No conversation??? Wow!

I just got frustrated by the turn of events. Just defies logic progression.

Not what I expected.

After the cliffhanger from the first book I was desperate to listen to Her Dom's Lesson, I couldn't stop thinking about it, and I had to know.

I don't know what went wrong. I felt it was a little cringe and I was just so disappointed. Again the end is by far the best of the book. This is where the story amps up and gets meaty, but I just didn't feel this story as much as I had hoped.

Robert is a delight to listen to, and did an amazing job with the narration.

Just like the first audio. This second story for me was just as great. Also again just have to say how excellent both narrators were. 5* Helen xcx

What made the experience of listening to Her Dom's Lesson the most enjoyable?

After listening to the first story in this series I knew there was no way I could be left like that so I jumped straight in. This story definitely took me on a roller coaster of a ride and my emotions didn't know if they were coming or going! I definitely went through them all! I can't say too much without giving anything away but what I will say is this was the perfect conclusion to an amazing story.