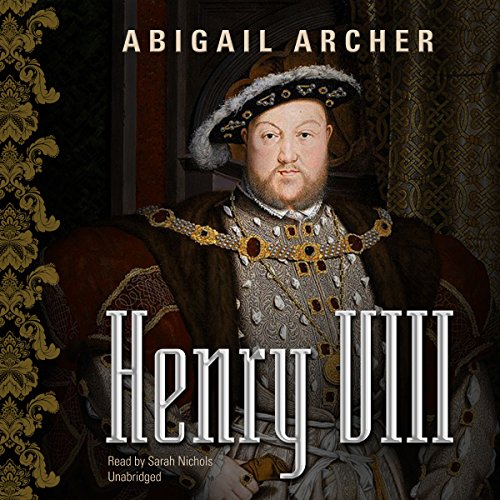 Henry VIII ruled England from 1509 to 1547. As a young man, he was fond of sports and hunting and was said to be uncommonly handsome. Standing more than six feet tall, he loomed large in the lives and minds of his subjects as he navigated his country through the tricky diplomatic and military hazards of the 16th century.

A man of enormous appetites, Henry conducted affairs with many women, married six, and executed two. His infatuation with Anne Boleyn set in motion a chain of events that reshaped the church in England and eroded the dominance of Rome. But the popular image of Henry as a crude tyrant, dispatching courtiers, enemies, and wives with gusto, obscures a more nuanced and fascinating character. He was a true Renaissance king who presided over one of Europe's greatest courts and nudged Western civilization onto a new course.

Here, from Abigail Archer, author of the New York Times best seller Elizabeth I, is the story of Henry VIII.

What listeners say about Henry VIII

I love the Tudor period and can never read too many books on the subject (100+ so far). So I figured I’d add this short one to my brain cells. Well, this version is a complete waste of time for anyone who has read even ONE prior book on the subject. The author just regurgitates a few facts that she “picked up” from other books, Wikipedia, television, movies, etc. Most of her info comes from books by Antonia Fraser, one of the best authors of English royal history. Not a bad approach IF she hadn’t skipped so many really important facts. The book lacks substance and continuity. She spends a lot of time on Henry’s early years but a rookie reader doesn’t really learn anything about him. There are pages and pages on Anne Boleyn which I understand because she was the most interesting of Henry’s queens. But the author didn’t bother to finish up Kathryn of Aragon’s life and death in a way that made sense. There wasn’t much of anything on Jane Seymour’s tragic death after giving birth to Henry’s sole male heir - the reason he used to dispatch both Kathryn and Anne. I must have blinked when Anne of Cleves came on the scene. Before I knew it, we were on to a very sparse story of Catherine Howard. Again, not very well written or cohesive. Then finally his last Queen, Catherine Parr. We got a good sense of her intelligence and calming affect on Henry (who was a shadow of himself by her time). He finally died and Parr remarried to her long-time love Thomas Seymour, then “POOF!”, she was gone, dying in childbirth just a year after her marriage.

Maybe I’m being too hard on the author. The title of this is “Henry VIII” and it IS about Henry VIII, but in a book report kinda way, resulting in a new version of “Cliff Notes”

The upside is that the title is FREE under the new Audible Plus Catalog. This book, as are many others in this free option, are not ones which I would pay for. They seem to be “test” works, not worthy of real book releases. But, like I said, this book is FREE. Accordingly, I got what I paid for! Can’t be too mad about that, I guess. 😳

It never lost my interest. Left me wanting more details, so now looking for another book on this subject.

Henry The Eight is likely to most written about English Monarch. You can just imagine what it must have been like during his reign with all those women, scandals & beheadings. This is a Kingly tale indeed.

I feel like this book was a very good summary of Henry the 8th. There were a few points that I felt were potential off, but overall a very concise summary.

Good book, it is a more high level overview of his life than a detailed review.

Sample not sure wanted

Not interested. Sample only and want to remove. How to do this is not evident

Being specific to Henry's life, I learned a little more about him. My takeaway us that he was not nice at all.

I had hoped to learn about Henry’s rule, but book was mostly about his wives. Little time was devoted to the overall reign.

Really enjoyed this... kept getting the wives muddled a bit... but only natural I suppose. Made a good relaxing read, teaching me royalty is only human and often not too humane. Interesting. Could never get the straight of British royalty,; this helped some!