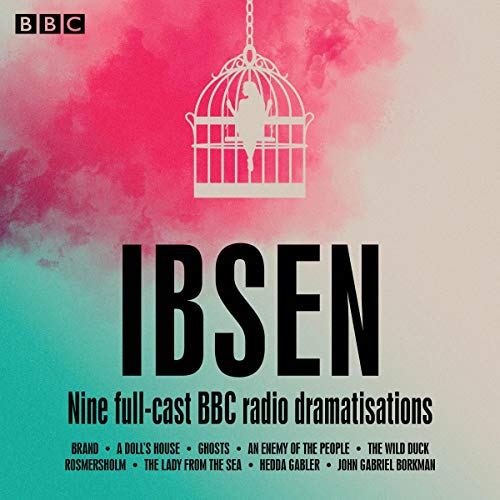 Often described as ‘the father of realism’, Henrik Ibsen was a pioneer of modernist drama. He influenced playwrights as diverse as George Bernard Shaw and Oscar Wilde and is the most frequently performed dramatist in the world after Shakespeare.

Included in this collection are adaptations of his tragicomic masterpiece The Wild Duck, his complex and compelling play Rosmersholm, the epic drama Brand and the tragedy John Gabriel Borkman. Ibsen’s A Doll’s House is relocated to 1879 India in Tanika Gupta’s Audio Drama Award-winning dramatisation, while the provocative and scandalous Ghosts is adapted by Richard Eyre, with the cast of his Olivier Award-winning Almeida Theatre production.

Also featured are vibrant dramatisations of Hedda Gabler, whose desperate heroine is trapped in a suffocating marriage; The Lady from the Sea, about a woman torn between security and passion; and An Enemy of the People, in which a whistleblower reveals an inconvenient truth and is vilified for it.

What listeners say about Henrik Ibsen

Great to have these captured for posterity rather than looking out for them on Radio 4 and Radio 4 Extra. Some quality performances from today’s best actors, and even adaptations by great playwrights like David Eldridge.