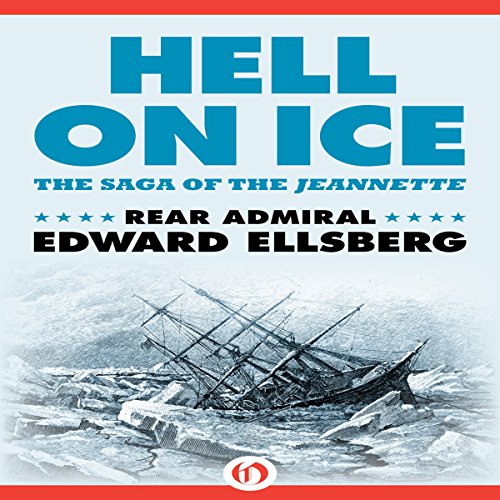 In the 1870s, newspaperman James Gordon Bennett of the New York Herald drummed up excitement and publicity for his paper through highly publicized missions of exploration. In 1879, Bennett's idea for a voyage was his most audacious to date: the North Pole. To do this, he hired a team of naval veterans in addition to a smattering of civilians with specialized knowledge in meteorology, whaling, and naturalism. The men on board the Jeannette set off in September of 1879. This would be the last time anyone saw them for two years.

The product of devoted research into personal histories, memoirs, and classified congressional investigation records, Hell on Ice is a remarkable document: a novelization of history, turning the horrible ordeal of the brave men of the Jeannette into a riveting narrative. Written with a weathered seaman's familiarity, the story brilliantly captures a most perilous voyage from the perspective of the ship's chief engineer. The men of the Jeannette endure months trapped in an Arctic ice pack, and then begin a desperate trek for home.

What listeners say about Hell on Ice

Great story, and great way to approach the telling

I had already purchased "In the Kingdom of Ice" and thought I would be comparing these. But the truth is, this has been a magnificent counterpart. This focuses on the dialogue between the characters in the same way that many of the Shackleton books do, where as "In the Kingdom of Ice" focused more on facts, geographic locations, etc.

For example, "In the Kingdom of Ice" speaks of the bad puns of the crew member Collins, but this book explains some of the puns in detail. They were horrible.

Fascinating tale of exploration team searching for a passage to the North Pole from the West. I enjoyed the descriptions of the machinery on the ship. You can tell this was written by an engineer. He captures well the interactions between officers and crew and their diverse personalities. Their impossible journey could have been a noir setting, but Admiral Ellsberg shows the faith, heroism and dignity in the struggle for survival.

If you read it in the winter, be sure to dress warmly. A blanket would help.

The book was very intense...so realistic. I felt I was a member of the crew and experienced a portion of their immense suffering. Outstanding performance they were my shipmates only in passing. The story robbed me of sleep and energy, yet I was humbled by their suffering and astonished at the dedication to one another.

Hell on Ice is awesome

Edward Ellsberg is gifted in telling a great tale. He has a knack for taking technical info and breaking it down to paint an awesome picture in your mind with ease. I have read his books, it was fun to listen to them. Highly recommended adventure yarn.

A brutal tale of survival and struggle

I enjoyed the authors book, On the bottom, so I tried his other books. I enjoy his writing, it is captivating and interesting. I listen to audiobooks on my daily commute, so a good book can make the ride better or worse. Ellsbergs books have me slowing down before I get home so I can hear just a little more before I am home. The narrarator whom I have associated with 2 of his books, Stephen Hoye, is good to listen to and brings the stories to life. it's harder listening to the other books available on Audible by Ellsberg because you want to hear it as Stephen Hoye. But still, the stories are very good in the end.. you will enjoy them.