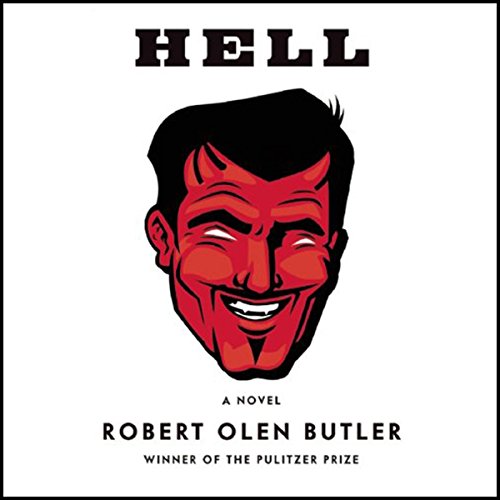 In his anarchic new book, the versatile Robert Olen Butler poses the questions: Where exactly is Hell, what do we imagine it to be like, and why do we expect it to be any different from life in the here and now? Butler seems to argue that Hell is essentially our life here on the planet magnified through our own self-harming obsessions.

The book is a riotous party, an ironical pop-art reimagining of the familiar, classical Hell, Brueghel by way of Banksy. Everyone is here — Clinton and Bush, Hemingway and Virgil, Mother Theresa and Richard Nixon. Dick Cheney and Beelzebub compare notes on bad bosses, while Martha Stewart shows how to cook organ meat (your own, that is).

Among these denizens is Hatcher McCord, anchorman of Hell’s very own television news service, trapped in a mutually unsatisfying relationship with Anne Boleyn and obsessed with tracing down and interviewing all of his ex-wives to find out where it all went wrong. They — we — are all in Hell not so much to atone for past sins but to act out our fatal flaws, and Satan/Butler has devised some particularly apt and lurid punishments.

As author, Butler relishes this new spin on Hell. In performance, he salivates over it, his urgency over McCord's plight giving way to lascivious frenzy at the myriad tortures, dismemberments, and “reattachments”. This is a performance delivered entirely in italics, straight from the pulpit, and he absolutely sells it. He also takes due care with the book’s many beautiful moments, such as “In the thoroughfares, stretches of mugger darkness are broken by rotten orange oases of sodium vapour lamps, that fill all the 21st-century dead with the sadness of interstate rest stops.” This follows a hair-raising account of sundown in Hell, which is rapturously verbalized.

If some of Butler's targets seem too obvious, too juvenile in their satire, it is satire with sadness at its heart: the denizens of Hell are enslaved not by Satan (who, as McCord discovers in one of the book’s strongest passages, turns out to be not so omnipotent after all) but by the neuroses of human nature. Yet Butler’s passionate delivery carries us to an unexpectedly uplifting climax, an embracing of a shared humanity even in the stygian depths, a kind of “We Are The (Under)World”. Being denied what we want may seem hellish, but getting what we want is an isolating experience, and Butler makes a convincing argument that there are worse places to be than in Hell. —Dafydd Phillips

Hatcher McCord is an evening-news presenter who has found himself in Hell and is struggling to explain his bad fortune. He's not the only one to suffer this fate - in fact, he's surrounded by an outrageous cast of characters, including Humphrey Bogart, William Shakespeare, and almost all of the popes and most of the U.S. presidents. The question may be not who is in Hell but who isn't.

McCord is living with Anne Boleyn in the afterlife, but their happiness is, of course, constantly derailed by her obsession with Henry VIII (and the removal of her head at rather inopportune moments). One day McCord meets Dante's Beatrice, who believes there is a way out of Hell, and the next morning, during an exclusive on-camera interview with Satan, McCord realizes that Satan's omniscience, which he has always credited for the perfection of Hell's torments, may be a mirage - and Butler is off on a madcap romp about good, evil, free will, and the possibility of escape.

Butler's depiction of Hell is original, intelligent, and fiercely comic, a book Dante might have celebrated.

What listeners say about Hell

What a piece of literary genius.

What did you love best about Hell?

Not only do we see an update of Dante here, we get to meet the denizens up close and personal. To paraphrase Walt Kelly

What was one of the most memorable moments of Hell?

The part I tell everyone about is the visit to Satan's hunting lodge. To say any more would suck the fun right out of the experience.

Who can pass up a succubus ?

If you could rename Hell, what would you call it?

Thank You for Burning.

If you are the type of person that is a little cynical and likes off color humor you will enjoy this book.

I got this book a long time ago. Still love it. I just don't understand why he would have ever left the burger place is all. Good luck Hatcher.

liked this book, interesting topic.enjoyed listening to this book, but did not like the ending.