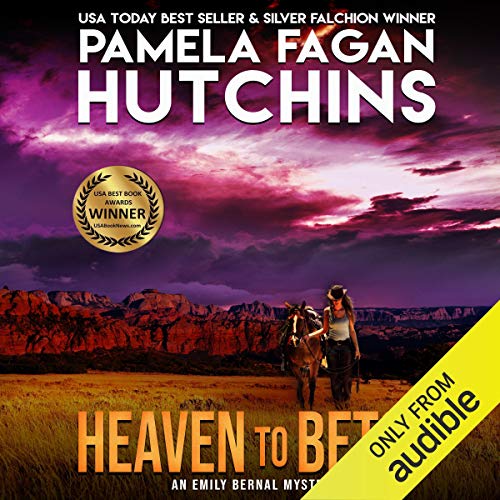 From the best-selling and award-winning author of the Katie & Annalise books comes a spin-off series! Heaven to Betsy features Emily, Katie's stateside best friend, in her own hilarious adventures.

When a dead body swan dives from a balcony into the pool at a wedding, gossip about disgraced paralegal and former rodeo queen Emily - whose husband left her for a woman who's really a man - comes to a halt.

Enter Jack, a secretive attorney who is a sexy mix of cowboy and Indian. Emily refuses to work for him until she learns about the disappearance of the six-year-old daughter of his notorious client, Sofia, the wedding shooter, who is also an illegal immigrant.

Emily feels a strange affinity for the girl and launches a desperate search for her. Bodies pile up across Texas and New Mexico in her wake, as the walls around her own secrets begin to crumble, and the authorities question whether the child is anything but a figment of her imagination.

See why Pamela Fagan Hutchins' novels have won contest after contest. A former attorney and native Texan from Amarillo, who spent 10 years in the Caribbean, Pamela splits her time between Houston and a little place called Nowheresville.

Great action, didn’t pick what was happening in the background until it was revealed. Things weren’t going well for her but improving by the end. Look forward to next book. Didn’t really like the narrator.

I can't really answer this without being insulting and I apologize in advance. This book aggravated me. First, it's aimed at women which isn't what bothers me. Someone who would read this book who lives in a dry county, naive, lives a sheltered life, conservative, very silly. The writing is fine and so is the narration, I just couldn't stand the content. Silly, silly book. I couldn't finish the book.

What was most disappointing about Pamela Fagan Hutchins’s story?

Emotional silly heroine who is weak and naive. I can't stand women who act like their reproductive organs are the center of the universe. Would the author stop having the heroine passing out and bleeding from her "girlie parts" please? It doesn't take a genius to reproduce. There is more to the world than babies, and marriage. It's a big world out there.. That and the heroine is just dumb! Since when do women lose 100 IQ points due to their reproductive hormones? How does she get up in the mornings without hurting herself? Same goes for her silly mother. Did I mention silly? She (the author and her heroine) put women back a hundred years. A lot of judgmental, nosy characters. One word -ADOPT.

What does Tracy Hundley bring to the story that you wouldn’t experience if you just read the book?

I wouldn't even crack open the book. I obviously didn't look closely when I ordered the book. My bad. Serves me right for not taking the time to read the synopsis closer.

Annoyance and a waste of time. I didn't finish the book.

Do people like this actually exist in real life? I hope not. I do not mean to insult the author or the readers who love this book. I just didn't like the heroine and her boo hooing over her reproductive system. There are always options. Women are stronger and smarter then that.

Hutchins once again hits a home run! Looking forward to the next episode in the series.

This books has as unusual main character, Emily. Emily has problems that are familiar to all of us; divorce, pregnant, broke, having to move back home, and a job that she's not sure about. Emily is a paralegal and she ends up being an assistant investigator. Humorous and entertaining.

Had my arm hairs standing on end!

If you could sum up Heaven to Betsy in three words, what would they be?

What was one of the most memorable moments of Heaven to Betsy?

Jeez, there were so many, but I loved when I realized she had finally found Valentina!

She has a very believable Texas twang, and her interpretation of Jack was surprisingly good, too!

Yeah, all of it. Especially the part where she saw the Mountain Spirit at the end.

I loved the whole book, found it really fun and adventurous.....The entire last chapter was AMAZING.

A surprisingly good story. I loved the plot and characters. Though this author is new to me I'm looking forward to the next book in the series.

While the author showed some comedic talent, I thought attorney Jack was more of a jackass than a romantic hero. He didn't seem sympathetic or concerned that the 6 year old daughter of one of his clients was missing - what kind of human beings doesn't care about an innocent child?

I wanted to like Emily, a late 20s paralegal with a gay husband and an unexpected pregnancy. I found it implausible that she didn't suspect his true sexual orientation when her young healthy husband showed almost NO interest in having a sex with her. Then when she caught him cheating, Emily ran home to stay with her mother, a cold and judgmental woman - what was she thinking?

Heaven to Betsy had potential, if Jack wasn't so cold & self-absorbed and Emily had more confidence & common sense. The plot may appeal to young adults but made me want to slap both Jack and Emily. Also, the narrator sounded like a snotty teenager.

Emly is a determined, spirited, a paralegal, and a bit of romance with her boss Jack. Plenty of drama in her life, and plot is fun and full of adventure. The narration brought this to life and well done.

at first I was not as into this book as the others, but towards the end it really keep me intrigued. Looking forward to find out what happens with the charters in the next book.

An enjoyable listen to lose myself in for a few hours. This book stands apart from the first books in the series... while there is a relationship between the main characters, this is Emily’s story.

I think Pamela Fagan Hutchins did a fine job with the characters and storyline for this beginning of the series within the series. I look forward to seeing how these characters develop.

Tracy Hundley grew on me as the narrator. I think she did a great job of bringing Emily to life.

So excited for an Emily tale!

Ready for more adventure in the Katie world? This time it's not Katie herself getting into trouble and on an adventure. It's her best friend Emily back in the USA. I was so excited when I saw this was an Emily book. I loved her as a supporting character in Katie's life. I was hoping she'd get her own book. It is no wonder why they are friends. They both get themselves into some pickles. In this story Emily is in the process of getting divorced after catching her bisexual husband cheating. As if that isn't stressful enough, she is back in her hometown and everyone is gossiping about her. It doesn't help that her mother is part of that. She also has a secret, she's pregnant. As she takes a new job she ends up throwing herself into a missing persons case that only she thinks is valid. Before she knows it she is in danger of being a murder victim herself! This book had so many surprises and twist and turns. Truly a great suspenseful mystery. This narrator did a great job as Emily. Totally what I thought she would sound like. I hope there is more from Emily!

A little slice of heaven

I really enjoyed this book and think it is a great start to a new series. Quite a few characters from the previous books put in an appearance which was fun or added to the drama. I like Emily as a main character and can't wait to see what the author has in store for her in the next book.
Emily broken but not defeated after a surprise break up turns home to lick her wounds. Living with her mother again proves challenge and she is soon looking for a job so she can save up enough money to move out. The only job she is offered is working for a crimInal defence lawyer as his paralegal. The first case they work on is defending a Mexican woman that killed a man at a party that they were both at. The defendant doesn't seem to understand the seriousness of the situation and is fact more worried about a little girl that no one knows anything about. As Emily looks in to the case behind her new boss's back, as he wants her to only work on paying customers and to leave it to child services, Emily discovers that there is more going on with there there client than she is telling but then again Emily and even her boss has there own secrets to keep.
I liked the narrator as she was easy to follow along with.