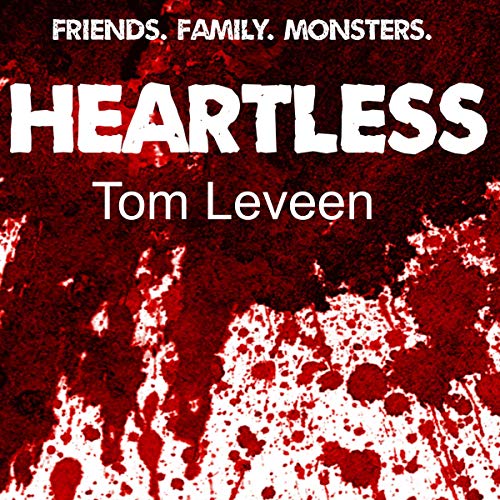 Urban legends of a murderous figure called Springheel Jack date back to the 19th century. What Baylee is about to learn is that “he” is most certainly for real...and not alone. When her only living relative - her older brother - becomes one of the bloodthirsty creatures, Baylee’s sole chance to turn him back rests with the only people inclined to believe her story: Her brother’s nerdy RPG gamer friends.

What listeners say about Heartless

Without giving away spoilers this was a great and unique take on a classic myth with great characters and a story I couldn't hit stop easily on since I needed to know what happened! The narrator did a fantastic job and this is a great thriller story from Tom Leveen!

I am a huge fan of pretty much everything Tom Leveen has written. He's got storytelling flair that holds my attention and keeps it, with relatable characters and emotional stakes that put me behind the eyeballs of the narrator.

Heartless is no exception.

I've been a gamer nerd since my parents started playing D&D when I was nine. While I may not have really latched on to the main character, with her disdain for her gamer brother and his friends, I like that she didn't hold it against them so much as just not get the appeal. I love that she turns to the gamers for help, and without their help she'd have been totally screwed. That hits all my little wish-fulfillment buttons, I'll admit.

As for the rest, well, it holds up a fun-house mirror to all my secret teenage wishes and turns them upside down. At that age I'd had a thing for the bad guys. The whole, "Look, I know I'm evil, but I'm powerful and would do anything for you." If I could mail books back in time, I'd make sure I sent this one to myself. It takes that concept and cranks it up to eleven. The monsters are seductive, but it doesn't shy away from showing how evil, how monstrous, they really are. This book kept me on the edge of my seat until the end, and much as I'd love to see a second book chase after this one, I'm positive it's not going to happen. There's just enough left unresolved to leave us guessing, imagining, maybe writing a great fanfic, but I think a sequel wouldn't have the same punch and I'm okay with that. (It's yet another thing I appreciate about Tom's writing. The books are self contained, but inspire you to want to know more.)

The narrator, Taylor Coan, really brought the story to life. There were seductive hints and bawdy tones that I glossed over in the printed version. Here, she hits you in the face with it and makes you take a hard look at what's going on in every word. She's got a good range in her character voices, giving each a distinctive personality consistent with the narrative. My only problem was there was occasional slight background hissing, and in a couple of spots, in the middle of a scene, it sounded like an obvious break had happened. They weren't jarring, but unfortunately noticeable. The performance more than makes up for these slight flaws, so don't let that keep anyone from giving this a listen!

A blood-chilling tale you should give a try!

*This book was given to me by the author at my request, and I provided this voluntary, unbiased review.*

This book was twisted - in a good way. I felt really bad for the MC, she went through a LOT in this story. What I really liked about it was the coming of age feel it had near the end of the story with the MC and her brother's friends banding together, it really worked. The protagonists were scary and strange; well drawn out. I liked the tie-in with Spring-heel Jack as well, that was a nice touch that I had only heard bits and pieced of before, but got a deeper dive into with this book. Definitely worth the read!

The story was pretty good, the narrator brought each character to life with her skill. I enjoyed her voice very much. I'm usually not a huge fan on women readers but I'd listen to her in any genre.

looking forward to more from this narrator

I thoroughly enjoyed this book. It was an absorbing story with a good cast of characters. Recommended!