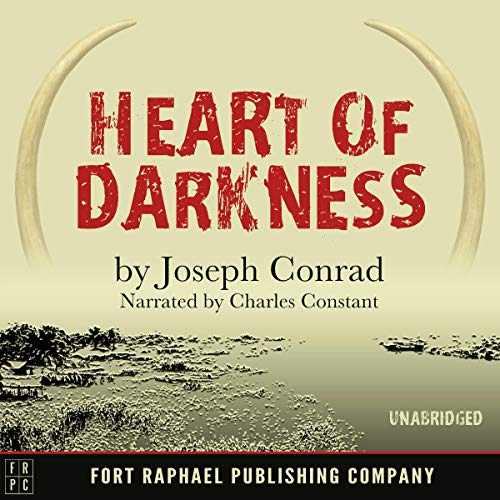 This is an audio-enhanced version of the novel with musical introductions presented by SoundCraft Audiobooks and Fort Raphael Publishing.

Long hailed as one of the greatest novels of the 20th century, Joseph Conrad's tale of one man's descent into the mysterious and deadly Congo jungle to find a messianic ivory trader is a journey into the depths of man's own greed and quest for power.

Marlow, our narrator, relates his story of his slow upriver quest to meet the strange and enigmatic Kurtz, who lives isolated in the jungle and is revered by the natives he exploits.

An unflinching look at the contrast (and similarities) between the so-called "civilized" and "primitive" worlds, Conrad's novel has become a classic novella, regularly included on any list of the finest books of the past century.

What listeners say about Heart of Darkness (Unabridged)

Too tedious to be significantly meaningful. Just events with no meaning, insight, let alone justified insight. Only drab commentary.

I selected this particular audible book based on the narrator’s ability. There were several other offerings for less money, but I think this narrator does a wonderful job. That’s why I selected this one. Highly recommend!

The story is wonderful, but this is a case where the Narrator is superior to the book. Mr Constant knows how to voice-act using subtlety of inflection and great understanding of the characters. His wonderful voice draws you in and you want to just keep listening to the story he is relating.

I've read this book in print, and now I've listened to it on Audible. The Audible is far better than the print.