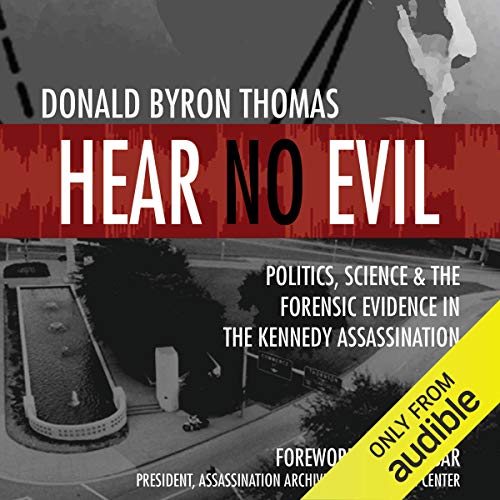 Scientific Analysis of the Forensic Evidence in the Kennedy Assassination
By: Donald Byron Thomas
Narrated by: David Rapkin
Length: 26 hrs and 50 mins
Categories: History, Political
3.5 out of 5 stars 3.5 (2 ratings)

David Rapkin’s audio talent brings gravitas to this detailed and extremely well-researched tome, Hear No Evil: Scientific Analysis of the Forensic Evidence in the Kennedy Assassination, by Donald Byron Thomas. By carefully analyzing the acoustics evidence in the case, Thomas sheds light on the single-bullet theory and offers a fascinating and complex new take on that fateful day in Dallas. With Rapkin’s clear and dispassionate style, listeners will easily soak in the myriad forensic and scientific analyses that help unlock one of the most important mysteries in American history.

Groundbreaking scientific analysis that breaks the JFK assassination wide open! Did a shot from the "grassy knoll" kill President Kennedy? If so, was Oswald part of a conspiracy or an innocent patsy? Why have scientific experts who examined the evidence failed to put such questions to rest?

In 2001, scientist Dr. Donald Byron Thomas published a peer-reviewed article that revived the debate over the finding by the House Select Committee on Assassinations that there had indeed been a shot from the grassy knoll, caught on a police dictabelt recording. The Washington Post said, "The House Assassinations Committee may well have been right after all." In Hear No Evil, Thomas explains the acoustics evidence in detail, placing it in the context of an analysis of all the scientific evidence in the Kennedy assassination. Revering no sacred cows, he demolishes myths promulgated by both Warren Commission adherents and conspiracy advocates, and presents a novel and compelling reinterpretation of the "single bullet theory." More than a scientific tome, Hear No Evil is a searing indictment of the government's handpicked experts, who failed the public trust to be fair and impartial arbiters of the evidence.

Most Comprehensive Assassination Book To Date

This is undoubtedly the most scientific, unbiased, comprehensive, and convincing account of the details surrounding the JFK assassination. The author approaches this book not by simply setting out to prove or disprove a specific theory, or to offer unsupported conjecture into a case that is already overwhelmingly clouded with opinions, but instead to give a thorough analyzation of the evidence surrounding the assassination.

This book takes the approach of essentially giving a legal approach to the evidence surrounding this case - analyzing what evidence would, and would not hold up in court if Oswald were to have been brought to court. It furthermore continues to follow where the evidence itself leads, to a degree that leaves the reader "beyond reasonable doubt," as would be required in the court of law. The author's words address the known evidence and accounts of the event, as well as addressing popular conjecture, and even facing the opposition to such facts head-on. Each and every statement is supported by scientific evidence, and all work is shown that leaves nothing to the readers assumption or imagination.

I appreciate that this author, as every good scientist would, assesses every 'unknown' about this case within probabilities. It is easy to grow very tired of other conspiracy theorists that claim aspects to be 'indisputable facts,' when it is abundantly clear that the author was not present at the crime, nor is the author privy to any other overwhelming fact. The truth of the matter is, the world may never know for fact the events that took place on this Nov 22nd day, but this author brings into full light - "beyond reasonable doubt" - that the evidence brought about in this book are all compatible with the known circumstances of that day, and that all known evidence has been duly analyzed, all while deciphering how many other theories are entirely incompatible.

This book is jam-packed with scientific information about every aspect of the JFK assassination. Getting the most from it requires basic science and, even then, I would have been better off with the hard copy so that I could re-read difficult points. I assume the hard copy book has diagrams which would make a huge difference. If getting though the chapters can sometimes be a struggle, the summaries at the end of each chapter tie it all together in simpler language and are a big plus. Overall, the book is well worth the effort.

What made the experience of listening to Hear No Evil the most enjoyable?

The end. Seriously. The last two chapters made it all worthwhile.

What other book might you compare Hear No Evil to and why?

No other book that I've ever read or listened to end-to-end can compare. The level of analysis and detail presented by Thomas is incredible.

Which character – as performed by David Rapkin – was your favorite?

Which character was my favorite? Stupid question. This book doesn't lend itself to Mr. Rapkin performing in 'character'.

Not a tidbit and I'm not giving it away here. The last two chapters.

This is a hard book to listen to. It's difficult because when I listen I can't stop and look at the PDF that accompanies the book, so it's hard to grasp what is being communicated at times. The analysis and math is there, though, and it spells out the truth, which is presented in the final two chapters. Ultimately for me it was definitely worth the ~27 hour listen.

If you could sum up Hear No Evil in three words, what would they be?

Most indepth technical presentation without actually just writing out the autopsy and the gathering of evidence verbatim. The author refused to take anyone's word and has an enormous amount of scientist, doctors and any specialists top in their field.

Was not that kind of book.

Voice was very clear and made it sound as if he was not reading but from memory.

I believe anyone if they had the nerve to open the case again would in my opinion have enough to prove conspiracy.

What was one of the most memorable moments of Hear No Evil?

the facts... Golden facts that very few other books have. I enjoyed the fact that this book is all science and no speculation.

There was much more good technology in 1978 than I had thought...

Where does Hear No Evil rank among all the audiobooks you’ve listened to so far?

It is below the top 60 percent. It was interesting but too many calculations, stats, but it was informative.

Would you be willing to try another book from Donald Byron Thomas? Why or why not?

Yes, the information was really acurate but I think that is why it kept loosing my attention, too much stats.

Have you listened to any of David Rapkin’s other performances before? How does this one compare?

No I haven't, but I would not say no to listening to him again.

Just really informative with all the stats

A must have for the JFK Assassination!

A truly dispassionate and in my opinion masterful and neutral analysis of all aspects surrounding the actual day of the assassination of JFK. I have listened to everything I can find on the assassination and JFK's life generally on audible and this is one of, and probably the best of the lot. Mr Thomas admirably dissects all aspects of the shooting, from whether Oswald did bring in the rifle on the day, to the dishonesty of the Dallas Police and the many shortcomings of the Warren Commission and lies we have been fed since 1963. Conversely many conspiracy myths are disproved and challenged. It's a fascinating and easy listen, well moderated and read, and I got so much more out of facts I thought I already knew.

Mr Thomas does not come from a conspiracy or lone nut angle and because he presents in depth insight into every aspect of the day, he supports and dismantles accepted arguments, facts and myths on both sides.I was particularly interested in his take on Oswald's involvement. This audible is the difference between a black and white and a colour picture!

Possibly the most accurate book on the subject

A book that takes neither side but just looks at the evidence in a purely scientific way. It analyses the evidence in such a way that has rarely been done before. The depth it goes in to on subjects such as the &quot;magic bullet&quot; and the apparent head movement at the time of the fatal shot is second to none....why didn't the Warren Commission or subsequent hearings go in to this kind of depth? There is also a very good part regarding the police dictabelt recording that the HSCA looked closely at.

It can be very hard to follow when it goes in to very specific calculations but then the conclusions explain it in terms anyone can follow.

It accepts that virtually all the evidence is authentic which might be taking things a little far but it makes sense to do it this way even if it will be to the annoyance of die hard conspiracy theorists. That is not to say that the book is your run of the mill, Oswald did it alone type affair, far from it, but it assumes a lot more than I would be willing to in terms of the validity of some of the exhibits.

Don't expect detailed accounts of Lee Harvey Oswald's time in the Soviet Union, New Orleans or the trip to Mexico, it focuses solely on the evidence.

If you want a balanced retelling of the story based on the evidence and testimony then this is the book for you. Whichever side of the assassination fence you stand, you should get this audio book and forgot what you THINK you know

The narrator has a voice that makes the book a very easy listen on a book that in certain sections is extremely complicated.

Best audio book I have listened to in ages.

Excellent science, but not Oswald.....

A well researched scientific view of how many shots, from where and what contribution each shot played in both fact and myth. The best work is in the main body of acoustic evidence and is well worth keepung with th sometimes confusing and repetitive text. On a personal level, I am still confused about the JFK back wound which terminated 'at finger depth'....or did I miss something in the sometimes confusing audio version