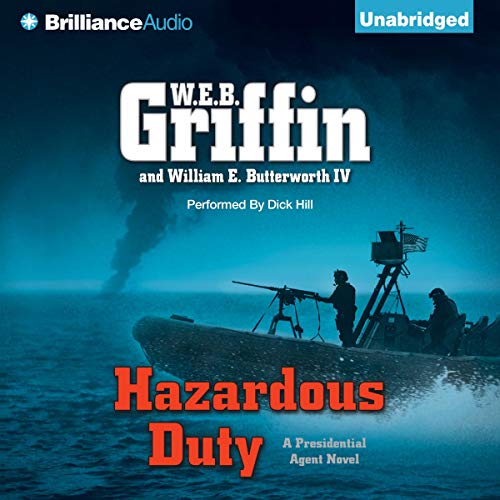 The Presidential Agent adventures return, in the most surprising novel yet in the #1 Wall Street Journal – and New York Times–bestselling series.

Mexican drug cartels are shooting up the streets of Laredo and El Paso. Somali pirates are holding three U.S. tankers for ransom. The President of the United States is fed up and, as Commander in Chief, has what he thinks is a pretty bright idea — to get hold of Colonel Charley Castillo and his merry band and get them on the case.

Unfortunately, that will be difficult. Everybody knows that the President hates Castillo’s guts, and has just had him forcibly retired from the military, and now Castillo’s men are scattered far and wide, many of them in hiding. There are also whispers that the President himself is unstable — the word “nutcake” has been mentioned.

How will it all play out? No one knows for sure, but for Castillo and company, only one thing is definite: This is going to be hazardous duty.

"Tough-fisted . . . hard-edged . . . Griffin’s formula is straightforward: Set up a bunch of obstacles, and let us watch Charley Castillo knock them down one at a time. His novels promise action, suspense, and rousing entertainment, and they never fail to deliver." ( Booklist)

What listeners say about Hazardous Duty

Not At All Like 1st Seven - Please No More

Would you try another book from W.E.B. Griffin and William E. Butterworth and/or Dick Hill?

Yes - I love the Presidential Agent Series - but Hazardous Duty was to much like Mash. This series went form best selling to making a joke of a very well written series

Would you recommend Hazardous Duty to your friends? Why or why not?

Was Hazardous Duty worth the listening time?

I had nothing else to do. I waited 3 months for the release and ended up with mash instead of book eight of this series

Wish I had read the reviews prior to buying... I have all Griffin books... Sadly this is
tripe.. Rehash of all previous books.. Had I not read them all maybe.. Just maybe, it
might have two stars.. Dick Hill did his splendid self!

What disappointed you about Hazardous Duty?

A slow, dismal reiteration of the earlier books of the Presidential Agent Series. The attempt to provide a comedic dialog to the non-action story is disappointing.

What could W.E.B. Griffin and William E. Butterworth have done to make this a more enjoyable book for you?

Deep six his first draft, and change his strategy to his usual of swank dining and hotels, jet setting between South America and Europe, consumption of alcohol, and

Dick Hill's performance is the best thing concerning this book.

Not my kind of humor. Instead of providing few chuckles, I kept thinking boring and stupid.

I love Griffin, but this book can be avoided

I don't know who would like this. I have probably twenty Griffin Books in my library and
the presidential agent is my favorite series of his work and have looked forward to this book for months. But...

Would you be willing to try another one of Dick Hill’s performances?

Of course. Dick is one of my favorites.

Sorry I bought this one.

If you enjoy WEB Griffin, Do not buy this one

This reads as if written by someone who shallowly (mis)read one of the previous presidential agent novels. The plot is essentially non existent, the action is pointless, it is not only a shallow caricature of Washington, but also of WEB Griffin's writing style and subject mastery. I have read and/or listened to most of the Griffin series and enjoyed many Dick Hill readings. I am disappointed. I hope that the authors and the reader are at least slightly embarrassed.

Only those who think all government officials are idiots.

Has Hazardous Duty turned you off from other books in this genre?

No, I am a huge fan of W. E. B. Griffin and have read and re-read all of his series, but this is terrible and should be withdrawn.

He reads the story.

If you could play editor, what scene or scenes would you have cut from Hazardous Duty?

All the play of the President and his spokesman.

Would you try another book from W.E.B. Griffin and William E. Butterworth and/or Dick Hill?

ARE YOU CRAZY??? This is the most horrible editing of any of these books. HAVE YOU LOST YOUR MIND?? The character went from Seymour Krantz to Jack Kensington? WTF is Jack Kensington? W. E. Butterworth and Jr must of lost their collective memory or the editors drew a paycheck with no work or plot comparison!! Of the first 6 hrs 5.5 of it was recounting all the previous books in perpetuity. IT never ended. Write something new. I FF'ed through entire chapters even though IOS7 doesn't have chapter breaks and never lost the "so-called" plot.

What could W.E.B. Griffin and William E. Butterworth have done to make this a more enjoyable book for you?

This book was 2hrs of new plot streeeeeeetcccchhhheeddddd into 13 hours of pure agony. As a fan, I am tired of the story of the centuries old Russian history. And the religion. And the half-assed love story. And the dumb-ass aviators talking to the control tower. And the 1950s theory of military history. Write a new plot line. You completely left characters out. And I could give a crap about Russian mob families. No particular impact on the story or plot. I want my money back…..This is almost as bad as the Corps series you have managed to ruin.

The narrator is still dry as toast. And he has mixed up the "voices" he has used in the past.It's like rubbing sand paper in my ears. And they keep the same guy. Over and Over and Over.

If you could play editor, what scene or scenes would you have cut from Hazardous Duty?

The entire plot of the priest from Chicago? WtF was that about? WHO CARES?!?!?!Get with the program!! Horrible plot deviations. Please stop with the recounting of every minor characters entire previous chapters of mis-quoted character development. I was really hoping for some new plot. What? ARE you getting paid by the word or letter now?My frustration is expected but you have over-whelmed me with your tripe on this one.

FF to the second part. Suffer through if you already own the series. You are keeping WEB rolling in his retirement home in NW Argentina. Maybe one day he can build his own Karin Hall and pay tribute to the "good guy" Nazis. And to think I pre-ordered this on Audible and B&N…..what was I thinking?

An unfortunate end of a great series.

In the afterward W.E.B. Griffin states he was having trouble writing the current volume of the Presidential agent series. Therefore he decided to write in a humorous way. It is a funny story, the President of the U.S. Joshua Ezekiel Clendennen is erratic to the point of being deranged and everyone knows it. He decides to recall Charles Castillo back to duty to deal with the Somali Pirates and the Mexican Drug Cartels but Castillo and Svetlana are in the process of getting married. The result is a funny story but as a long time Griffin fan and not a fan of comedy, I resented the waste of money purchasing the book. Dick Hill did his usual great job narrating the book. I understand that this is the last book in the series what an unfortunate way to end an excellent series. I read somewhere that the author is coming out with a new series entitled “Top Secret” about the cold war. I look forward to reading the new series if Griffin returns to his former writing style.

So far I have listened to more than 5 hours of this 6+ hour book and absolutely nothing has happened except talk, talk, talk. I can't believe this was written by the original author - there are too many details from the previous books that are totally wrong. Much of this book is spent retelling in minuet detail what happened in the first 7 book, as if the "writer" can't think of a new story line. There should be a law... What a disappointing end to a great series.

What would have made Hazardous Duty better?

If the authors went back reread the first six, adjusted the seventh and completely rewrote this one.

What was most disappointing about W.E.B. Griffin and William E. Butterworth ’s story?

Inconsistent writing style and the apparent disregard of the long time reader's expectations.

Did Dick Hill do a good job differentiating all the characters? How?

Actually surprised he agreed to do this performance, it really highlights his professionalism as a performer.

The cover art, to bad that scene isn't in the book.

I have purchased every title of W.E.B Griffin. Most of the purchases being hardcover versions with many duplicate paperback purchases for myself or as gifts to friends. Since 2011 I've also purchased many his titles through audible.com. I have never been so disappointed, although if I'm totally honest with myself we saw this coming after the last attempt left us unsatisfied.
With 232 audible.com books in my library, I'm seriously considering returning this book on principle (it would be my first returned book ever paper or digital).
This my be overly dramatic but I feel as if we've lost three of our favorite authors this year.