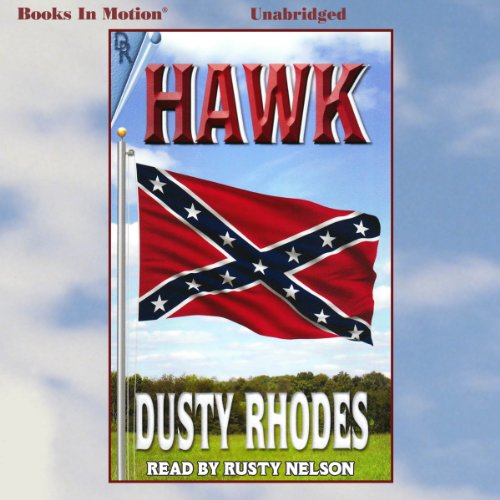 Officially, the American Civil War ended with the surrender of General Robert E. Lee at Appomattox on April 9, 1865. However, many “sympathizers” on both sides of the issue continued to wage their own “private wars.”

This is the story of the “Hawk” family who were caught up in the bitterness and aftermath of the war. Jubal Hawk served four years as a captain in the Confederate cavalry. He returned home to find his home burned to the ground, his father hanged, and his family missing. Night riders sympathetic to the Union cause, and backed by a land hungry rancher, were extracting their own brand of “justice.” Will Jubal be forced to fight the war all over again?

What listeners say about Hawk

You'll find "Hawk" to be brief but comprehensive, giving a lot of information in its 4 1/2 hours. Only an accomplished author such as Dusty Rhodes could write a short story of this distinction, with all the elements of a complete novel.

Jubal Hawk, a Calvary Captain of the defeated Confederacy, came home to find his father, a renowned horse breeder, had been hung, the horses missing and his home burned to the ground by night riders. They wore hoods over their heads so nobody knew who they were. The only clue Jubal had to go on was one of them rode a black and white pinto. He swore to find them and meet out his own justice, since the law was doing nothing to apprehend them.

"Hawk" is a romantic post civil war story with plenty of action. Rusty Nelson gave an effective performance. I highly recommend it.

There is something very familiar to me about this story. I checked my records and I had not read the book before. Was this made into a movie? If not, maybe Rhodes used some of the scenes in another book. Overall this is an interesting story of post civil war Tennessee. Jubal Hawk was a Captain in the Confederate Army and returns home after the war ends to find his home burned to the ground, his father hanged by masked raiders. His mother and siblings went to live with her relatives. Jubal reunites with family and sets out to rebuild their horse ranch. The night raiders attack again so Jubal sets out to find out who the raiders are and stop them. The county has a sheriff who is controlled by the leader of the night-raiders. The hostility between men who fight on opposite sides in the war result in fights and discrimination. The story has lots of action, some suspense and of course, a love story. The book is short easy to listen to, so it makes a good choice for a change of pace read between heavier reading books. Rusty Nelson did a good job narrating the story.