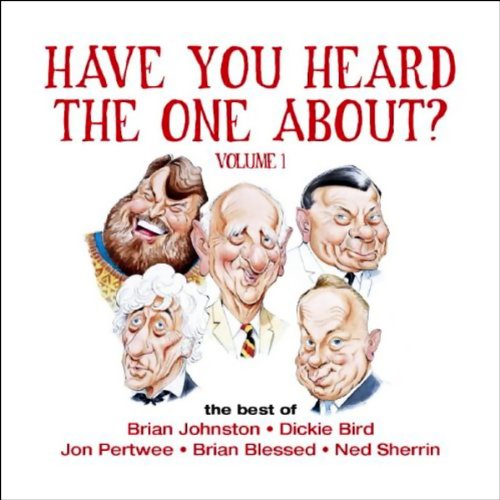 Have You Heard the One About

Have you heard the story about the day Dickie Bird was invited to lunch with the Queen? Or the one about Brian Johnston when he joined the Grenadier Guards?

There are dozens of hilarious stories about their personal experiences and behind the scenes in radio and television, theatre, film and cricket. From the classic TV programmes Z Cars and Dr Who to the theatrical legends Noël Coward and John Gielgud and the great sporting characters Ian Botham and Fred Trueman.

What listeners say about Have You Heard the One About

Dry wit, refreshing if not a bit dated now.

Yes, I would, Dickie Bird, Jon Pertwee, Brian Blessard who can not find them amusing.

Jon Pertwee is a great voice narrator and Brian Blessard just blows out the words. If you read the book and know their voices you would hear them rattle through your brain but hearing them is so much better.

Could not see this as a movie, but if a stand up or small group theatre most certainly.

Better for the older and wiser, scenes and stories are dated but still knowing each of the actors in this book from my TV screen it does take you back.

Better off with Wit of Cricket

Having enjoyed the Wit of Cricket 1, I got this in the hope of more good cricket stories, and also a more varied set on other topics.

The cricket ones are mostly duplicates, and the rest, to my ears, fall largely flat.

A story concerning an elderly postman getting his eyebrows stuck in the spokes of his own bicycle may well be capable of being funny but not as portrayed here.

Making a story about an actress out bra-shopping fully dull, yet mildly-offensive is a particular low point.

It's very funny, the stories told by the celebrities on this audio made me laugh out loud.