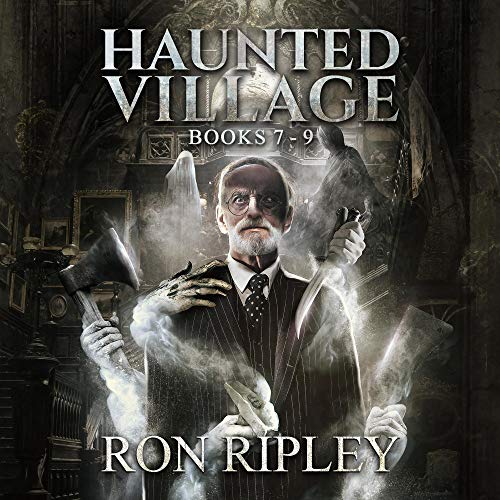 The final battle between the living and the dead begins...

Professor Abel Worthe has subjected the inhabitants of his village to unimaginable horrors. But the professor’s brutal experiment is finally coming to an end. And Worthe has saved his deadliest surprise for last.

Book seven - Christopher’s Blade: Within the walls of a rotting, old New England cottage, the ghost of a vicious serial killer named Christopher longs to taste the blood of a fresh victim. Marcus must battle this undead killer, as a new enemy gathers beyond the village gates.

Book eight - Silent Death: As Marcus and the others struggle to escape the village, they find themselves stalked by a demented soul who hears voices in her head urging her to kill. But this deadly specter isn’t the only foe they must face. The sadistic professor has set his eyes on one of the subjects, and Marcus must find a way to save him at all costs.

Book nine - Deranged Souls: Injured from his battles against the supernatural, Marcus confronts a ghost from his past, as another subject finds himself consumed by his growing paranormal abilities. The final battle draws near, and enemies and allies both converge on the village’s walls. Can Marcus finally beat the professor at his own sinister game?

Marcus must overcome crippling pain and fear and fight harder than he ever thought possible. But will courage be enough to defeat the enemies, and escape the professor’s sinister gauntlet? Or will the Subject B finally join the tortured souls that haunt Worthe’s village?

I loved listening to this series! Thanks so much, Ron, for selling your older series in groups! While I personally do not care for your short stories, you are a mastermind for your series! This one ended in glory! Suspenseful throughout, even at the end, I thought that you were segueing into another chapter, then, boom! Your entertainment factor is 10 out of 10 for this old lady, and I can do things and listen at the same time. Move over, TV.

I absolutely love this series especially the characters and ghosts with good narrations. My favorite ones of course were Marcus, Alex, Timmy as well as Joyce, Ellen, Elaine, Victor and Tom. Hate Abel Worthe, Kimberley and David (he got a little of what he deserved). Christopher's Blade; Christopher is dangerous with his bayonet which Marcus and Timmy do battle with, Alex is becoming more skilled with the ghosts, his love of Elaine and Joyce continues on in her escape. Silent Death; Victor and Tom have been brought in after Joyce seeks help to save her friends in the village. Deranged Souls; Alex showed he truly loved Elaine. Philip and Abel and David got what they deserved and ended up liking Nurse Schomp. Hate to see if this is truly the ending wishing for a follow up to the characters and village, does Timmy stick around and Alex meeting Shane.

The last three books from 1 of my favorite series.

These are the last three books from one of my favorite Scare Street series. Ron Ripley is one of my favorite Scare Street authors, and though at first, I couldn’t get used to Tom Bowers When he read another series, now I couldn’t imagine the books being read by anybody else. I love box sets, because I don’t have to go back and try to figure out what order they should be in, because audible doesn’t put book numbers in the actual title when you download them. With box sets, they do, and there’s no guesswork. these books were definitely worth the wait, as it took a while for audible to make them available. once I started a Worth’s Village book, I couldn’t put it down.

I've enjoyed all the different series I've listened to and enjoyed everyone of them. Looking forward to next one.

The best kind of scary

Thom Bowers is amazing, with so many different voices all immediately recognizable. The good guys turn out mostly okay and the bad guys mostly not okay—as it should be. The action and excitement move along, making it difficult to take necessary breaks for the reality around me.

I have So much enjoyed these Stories. And the Ending was so Great! This Ron Ripley can truly have my heart with all I have read so far. I loved all the Books and Hope to find More by this Aurthor

I just finished listening to the end of chapter 9 of the Haunted Village Series. I loved the whole series. I thought the concept of a haunted village with each home and business being haunted was a great idea. Each character was described and fleshed out nicely. As each started talking, I could imagine what they looked like and the scenarios they were put in. Great job, Mr Ron Ripley, and your wonderful narrator, Mr Thom Bowers! I’m excited to start on another one of your series!

An End Fitting for an Amazing Series!

I won't go into details about the plot, you can read that yourself in the description, I will however tell you how much I Loved this series, especially the cameo appearances from Shane Ryan. The storyline was well thought out from beginning to end, the characters so well fleshed out you really Love and Hate them, occasionally thinking a few favorite characters should stop being stupid on occasion (yeah, I mean Marcus once or twice when he ventures out and about by himself), Absolutely Love Timmy Because he reminds me of Shane Ryan, actually, I Love all the characters who live in the village. Highly Recommended.

I just cannot say enough about this series. Had me hooked from the first few sentences! Narrator was wonderful put so much life into the characters. I found myself gasping in shock then excitement!! Rooting for the good guys and wondering could this really happen? Loved it and I am sad it ended

Ron Ripley doesn’t disappoint. I can’t get enough of Shane, Victor and now Marcus. You find yourself attached to his characters and their stories. Thom Bowers is one of my favorite narrators and does a fantastic job. If you’re looking for ghosts, Ron has them for you.