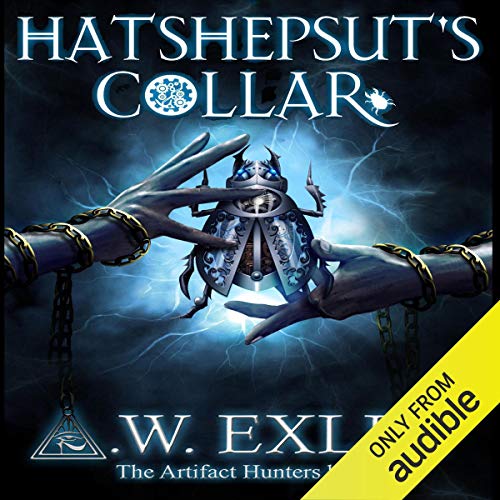 By: A. W. Exley
Narrated by: Gemma Dawson

An ancient Egyptian artifact is driving Queen Victoria insane, and that's not top of Cara Devon's growing list of problems.

Viscount Nathaniel Lyons is a man of numerous secrets, but there is one in particular that threatens his fledgling relationship with Cara. Stunned by Nate's revelation, and before she can absorb the ramifications of his actions, he is arrested, charged with treason, and imprisoned in the grim Tower of London. He stole something the mad queen wants, and only has days to deliver, before his date with the executioner.

Although sorely tempted, Cara can't let him die on Tower Green, not when their connection means she would share his fate.

Only together can Cara and Nate figure out how to wrestle Hatshepsut's Collar from around the queen's neck, before she plunges Britain into a world war. The search for answers sends Cara to the opulent Winter Palace of St Petersburg and the frozen depths of Siberia, with every step shadowed by an enemy with his own dark plans.

What listeners say about Hatshepsut's Collar

I’m sorry, I tried, but the tedious smut just got too boring to try to wait for the story to reassert itself.
Pity...
The premise had promise and the characters had real possibilities.

The story is awesome, the narration is wonderful! I am now officially addicted to this series.

A fantastic book! A. W. Exley has given us a story of lavish adventure, exotic locations, harrowing escapes and sensual passionate love. Narrator Gemma Dawson has taken the story to a higher level of enjoyment by giving life to each character with their own individual voice and personality. I absolutely loved this book and highly recommend it.

Really I’d give it a 3.5 but I rounded up. It’s not till the last quarter that it’s actually captivating. Somehow even though there’s little build up and tons of action, this isn’t that interesting of a story. But it is free so I’ll probably finish the series. With how it ended I’m hopeful the next book will be cooler.

Different but worth the time .

it takes a while to get use to her accent but once you get caught up in the story...not bad.

Unhealthy romance but every thing else good

The romantic and sexual relationship of the main characters is distracting from the mystery which is very compelling. Their relationship is also at times disturbing and unhealthy. If the story spent less time describing their sex play (in which the male is always the dominant and near to forcing himself upon the female) and their attempts at seducing one another, I would’ve happily given this four stars. The narration is good. The characters are very interesting and the mystery is compelling.

I've been listening to these stories while I work and they're a great background listen they keep you very entertained.

I love this story and can't wait for the next one to start. I like the flow of the story not to mention who wouldn't want to be a hellcat

it was a good listen

not as good as the first but definitely worth the price. I'll follow the story in the next one of the series.

this was wonderful, and very entertaining, paced nicely, read to perfection a pleasant use of my time .Thank you Mz Axley

I really enjoy these stories.

They are fun, interesting and entertaining. I would recommend this series. Well written and very well read.