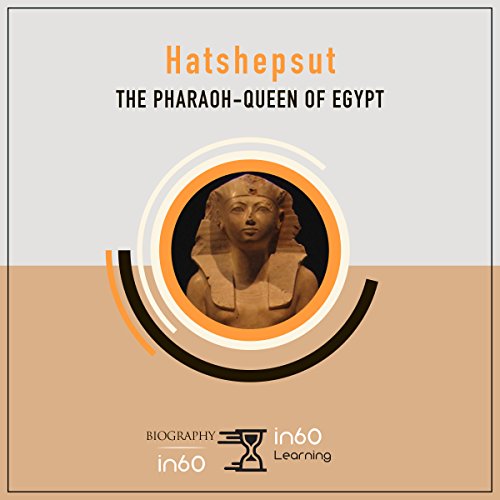 By: in60Learning
Narrated by: Michael Fitzpatrick
Free with 30-day trial

When Pharaoh Thutmose II died, he left an heir far too young to rule Egypt. His widow Hatshepsut stepped up to take his place. For at least the next 20 years, Hatshepsut ruled as Pharaoh King of Egypt in an era of prosperous growth and peace. When she died, her nephew Thutmose III attempted to smear her good name and wipe her memory from history. However, despite his efforts, his aunt Hatshepsut holds the title of most famous native Egyptian woman to ever rule as pharaoh; she also retains a legacy as one of the most successful female leaders in early history.

Smarter in sixty minutes: Get smarter in just 60 minutes with in60Learning. Concise and elegantly written non-fiction books and recorded audiobooks help you learn the core subject matter in 20% of the time that it takes to read a typical book. Life is short, so explore a multitude of fascinating historical, biographical, scientific, political, and financial topics in only an hour each.

What listeners say about Hatshepsut

Some sloppy repeats that could have been fixed with quick edits. I was hoping to expand on what I already knew about Hatshepsut but found nothing new here.

This is the seventh book I’ve read/listened to by In60 Learning and I am making my way through all their books. I enjoy them, they are short, and info packed.
This one is no exception.

This is the first book I’ve listened to by this narrator ( Michael Fitzpatrick ) and I would listen to another. He did well reading this content with enough emphasis on the words to keep it interesting.

History was never my favorite subject in school, but I’ve always been intrigued with the Egyptian lifestyles from so long ago. Their livelihoods and beliefs were just so different from other cultures that I enjoyed learning about it.

That being said, I was excited to learn more about one of my favorite pharaohs: Hatshepsut. Everything about her life is just so fascinating and even though little is known about her in great detail, her legacy of being a powerful, just, and compassionate pharaoh has survived the centuries.

In this audiobook, we not only learn about Hatshepsut and her accomplishments as a female pharaoh, but we are also informed of why certain decisions in her rule were looked upon by the people in the way they that they were. So there is a lot of information on Egyptian culture in general.

I could probably ramble on about how informative this short book is, so I’ll just say that I was very pleased with it. It’s not overwhelming in its presentation, flows easily between its topics, and the narrator did a fantastic job; especially at pronouncing the difficult Egyptian names.

I give it 5 out of 5 stars and recommend it especially to those interested in Egyptian history.

I received this book from in60learning for the purpose of this review. All comments and opinions are entirely my own.

This is a LiteratureApproved (.com) Review.