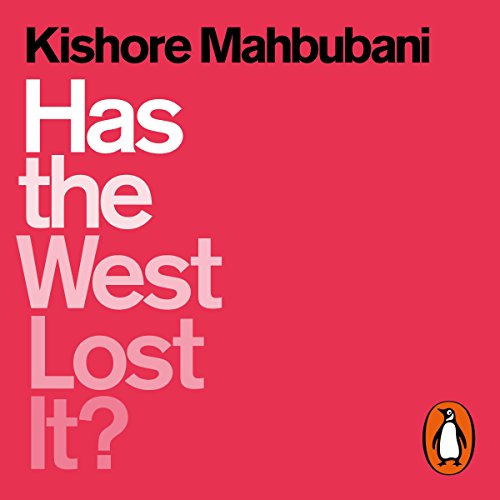 Has the West Lost It?

Penguin Audio presents Has the West Lost It? by Kishore Mahbubani, read by Jonathan Keeble.

The West's centuries-old status as the centre of global wealth and power is coming to an end. As the new powers - China and India from Asia and others from Africa and Latin America - rise to the top of the world's pecking order, how should the West react?

Kishore Mahbubani argues passionately and provocatively that the West can no longer impose its power and ideals on the world at large and - paradoxically - that only by admitting its decline can the West set itself up for strategic success in the long term.

Mahbubani examines the myths and self-delusions of Western power with an outsider's critical eye, and the shocking freshness of his geopolitical analysis will give all Westerners and political thinkers pause for thought.

What listeners say about Has the West Lost It?

The book is about the change in the global landscape since the end of the Cold War and how the hubris of the West with respect to ideology, power, moral authority, geographic reach needs to be fundamentally reversed. The need for reflection by western political elites is without question, especially if their is a belief that the past offers good lessons for future policy considerations but the tone of this book is quite ridiculous. The author frames much of his initial perspective on the deluded optimism that was in the minds of western academics when Francis Fukuyama published The End of History.

The author discusses how the world has been changing. How China and India have reemerged and the global order of the 20th century has totally changed. The author discusses how the West fails to recognize that and that its actions with respect to the global community are neither wanted nor needed by many. The author discusses how the West humiliated many countries and invasions like Iraq were catastrophic and how western elites should self reflect. That there exist some "western elites" who can't see the strategic errors committed both through the cold war era as well as obvious choices in the last decade or so most certainly does not mean that western elites have not self reflected. The author's tone is pretty childishly us vs them with the them as extremely hazy. Europeans who are blanketed with the western elites are very much non-interventionist in their state policy. So the author really is in a thinly veiled term talking about the US. That in and of itself isn't too problematic, but with respect to colonial history, clearly Europe has far more culpability in that realm than the US in which case what is the point of all of this historical reflection. It seems like this book is about settling some score, which frankly being a diplomat from Singapore has little substantial credibility in terms of the agony of western imperialism. The author's understanding of economics is non-existent; the author highlights Turkey as an example of how the West humiliated Turkey by not letting it in rather than even focusing on the lack of fiscal or monetary reform by Turkey; just considering the challenges Greece has highlighted that come with a monetary union and considering what would have happened had Turkey joined with current events starkly reinforces the author's perspective is from some geopolitical status based mentality. The author repeatedly refers to the humiliation of Russia and how the US should stop bombing the Middle East. I too would like the US to stop involving itself in other nation's affairs as well as to have never have invaded Iraq, but the issues we face today are not solely due to such actions and the affect of things like smartphones and their ability to catalyze coordination that led to the toppling of other Middle Eastern regimes cant be blamed on the US and Iraq. The author's analysis is weak, used to support his own arguments in isolation, and argued to some audience that apparently wants to cheerlead his anger.

The main lesson from the book is that the world has changed, the rules of changed as has the power structure and the west must recognize and change too. That is most certainly true and there is a great need for structural reform. That being said, that the book has a valid lesson doesn't change that its tone is condescending and steeped in aggressive language that serves no productive purpose. The author's target in terms of his criticism is totally different than the target audience and as a consequence reading this can be tiresome as I learned literally nothing. I gained no perspective, I gained no policy ideas that are at all substantial and I got some confused narrative for the world is one but the rhetoric is all the West vs the Rest. Some of the policy ideas are so unimpressively trivializing real issues that the book loses all credibility. The author highlighting how Singapore has living wage policies to combat the challenges of globalization as an example, is a total joke. The economics of a city state vs a country are incomparable; I am certain NY could support a living wage if the tax and service provisions were restricted to the city... The author can't be that naïve.. In any case, the book is really not worth reading as the existential issues that face the West are far better addressed, partially, in more thoughtful books. The author's hawkishness is not convincing beyond the initial obvious criticism he posed, which one could read in the first chapter.

This is a timely, well-researched, and passionately written provocation, especially important for Western readers with a concern and genuine commitment towards global well-being.

Contributions to global development nurtured in the Western world are undeniable: market economies, technological advances, democratic principles, and much more. However, the expansion of these phenomenon do not translate into historic inevitability, conceptual domination, or continuous social improvement in our rapidly changing world.

"Has the West Lost It?" challenges readers to appreciate the emergence of a more pluralistic human civilization, and the consequences of arrogance, hubris, and willful blindness on a planet that we, and future generations, must share.

Mahbubani's perspective is deeply informed by decades of personal responsibility and professional commitment as a global diplomat (Singapore's ambassador to the United Nations) and professor and academic dean (Lee Kuan Yew School of Public Policy). As a prolific editorial writer, he blends a writer's literary gift and a policy-marker's comfort with data into a persuasive call for mutual respect, rule of law, and pragmatic optimism towards the future.

I do not fully agree with all the conclusions made, but the arguments made are clear and thought provoking.

A short, but impactful book that helps to loom at world development in a different way.

Best paired with a first rate piece by: Robert Kagan
"The World America Made"

Highly recomended together but Kagan first.

Missed opportunity. Largely paraphrases long known points without diving in, and with a big dose of naivety.

This book simplified the heart of the problem between USA, Western Countires and China. The writer cleverly delivers also common sense based policitcal economic solutions not only to the reader but also policy makers of both sides.

An excellent summary of the issues facing the Western Powers.

This book is a great little gem, no line is wasted and there is plenty of food for thought here for western policy makers. In a time of massive uncertainty - we need to start leading more with our heads and less with our hearts. The world is not black and white.

Kishore really understand East&West is a Must Read

This book is one of the best in examining what happening to East and West. I do really think that everyone must read this book and understands what has gone wrong in recent years in the West. Western People are being conned by their Political Parties. They divide them Left and Right or Democrat and Conservative this ploy and total control of the MSM brainwashing the Westerners. So unless there must be new breed of Political class raises from this there will be no way out.

The author is sincere when he says he speaks as a true friend of the West, and the book is clear and concise and superbly argued. The only problems I found were that he writes with the same condescension he seems to have experienced from Western leaders as a diplomat, and his analysis of our relationships with Russia and the Middle East, though not critical to his overall argument, are really very simple-minded. Still, he seems wiser than most Western thinkers, and his argument should be heard by those in power.