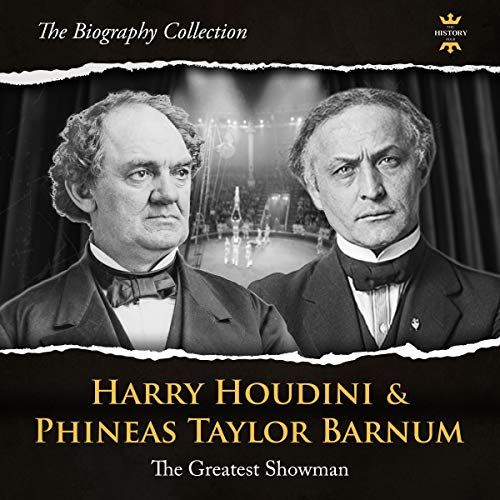 By: The History Hour
Narrated by: Jerry Beebe

These two men are brilliant showmen. Throughout his life, Houdini performed first in carnival sideshows, then in Vaudeville, where he would share the stage with all manner of entertainers, and later, in his thrilling show, where he became the most celebrated magician and escape artist of all time. Phineas Taylor Barnum was a successful small business owner, entrepreneur, newspaper editor, museum owner, sideshow operator, touring promoter for opera singers, theatrical producer, circus owner, congressman, mayor, and philanthropist. He influenced virtually every aspect of American life, and it cannot be underestimated.

Inside you’ll read about

A brilliant showman, genuinely interested in human psychology, and Houdini’s life and work reflect these many interested, and he must have known the cachet being born in America would give his act. More than a little daredevil, Houdini performed feats never matched by any other person. Phineas Taylor Barnum’s name has been associated with circus sideshows and freaks and jokes for more than a century, but the truth is that he was a great man and a visionary who shaped the country he loved so much.