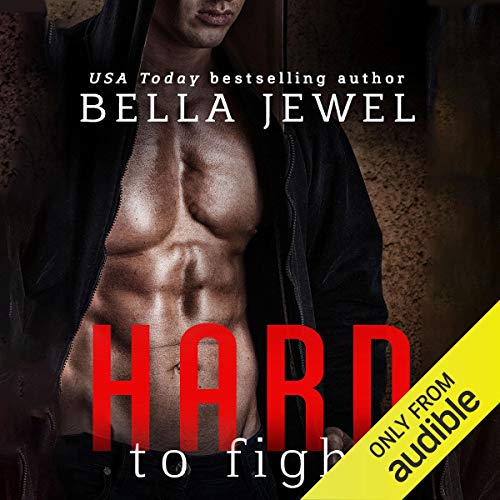 Grace is a bounty hunter who wants to be taken seriously, but her boss refuses to believe that a woman can bring down a dangerous criminal. She finally gets a chance to prove herself when she's given the case of a lifetime: capture Raide Knox and bring him to justice. Raide is a dangerous fugitive on the run...and the sexiest man Grace has ever met. Catching Raide won't be easy. He's not the kind of man to go down without a fight. Raide is more intense and frustrating than any man she's ever had to deal with, and the instantaneous attraction that sparks between them is undeniable. One thing is for sure...it's going to be a case they will never forget.

What listeners say about Hard to Fight

Well, I knew Bella Jewel was a very talented and gifted author but nothing, absolutely nothing could have prepared me for the sheer pleasure-filled awesomeness of this listen. It had humor, suspense, angst, deadly drama, action, passion, sex, a very likeable kickass Heroine who was full of sass and attitude, a sexy dark Hero who was a badass Alpha and a complimentary cast of secondary characters who were all entwined throughout this mind blowing storyline.

Grace is a Bounty Hunter and is finally given a major job.... for $30,000 bring in Raine who is wanted for the murder of his Sister and who'd skipped bail - you can imagine Grace rubbing her hands with glee and feel her excitement at the thought of being given this job that she had 2 months to complete. But bringing in the most handsome and sexy man she'd ever seen was going to test her abilities, her patience, her sanity and her heart.... because nothing could ever have prepared her for the turmoil and emotional turbulence that was about to explode into her life.... as lines were blurred then boundaries crossed, bridges were burnt and heartbreak was inevitable.

The attraction was palpable and instant but not immediately acted on because they first had to play an intriguing game of cat and mouse which was fun, had witty and sexually charged banter and was unpredictable as feelings got in the way of duty, a murderer turned out to be a victim and passion replaced pursuit. But unfortunately Grace's plan of seduction backfired when she became the one seduced into a whirlwind weekend of pleasure, passion, possibilities and dreams of what could be. Grace wasn't prepared for Raine's heartbreaking story, his openness, the soul-to-soul connection and his touching and romantic side. However, in return, Raine wasn't prepared to have his heart ripped out, after tasting Heaven, when he finally learns the truth and secrets that had been cleverly concealled by Grace the too good to be true 'Waitress'.

My husband tried hard to part me from this mesmerising listen but my reply was nope, nuh-uh, no way and various other negative replies - usually ending in " off" because it was just that deliciously good. And even the lure of going out to eat couldn't entice me to hit the stop button.... and this is when my drawer full of Take Out Menus comes in handy - so, hit pause, pick a menu, a quick discussion on what everyone's having, here's the TV remote babe, yes stay up late kids..... sigh, sit back and resume listen..... blissful contentment as everyone's happy.

Worth a credit? Told from Grace's POV, a totally addictive, well described, action fun and disaster fuelled storyline that was filled with characters I just wasn't ready to say goodbye to and a brilliant narrator who brought every scene to life with her passion-filled storytelling. So YES, IMO, the perfect harmony of drama/romance/narration and well worth a credit.

I like Bella Jewel's books. I have a hard time using a credit on anything less than 10 hours but I've bought a few of hers on audio and enjoyed them. This one I couldn't get past the first two chapters. The heroine has to be pretty tough, she's trying to make it as a bounty hunter right? To me she sounded like a high pitched, empty headed ditz. When she meets the hero it's mentioned he has a slight accent that she can't place. That's when the hero starts to sound like a bad imitation of Dracula or a Russian mob boss and I couldn't take any more.
I bought the book elsewhere and enjoyed reading it on paper so the hero could sound sexy and the heroine could sound like a grown up in my head.
I'm sure the narrator is great, she just missed on this one.

The male main character rapes the female main character. The story would be good without the clear rape that happens. She says no, he can’t read her mind, and he is doing it to purposely hurt her. Ruined the whole story. Normalizing rape within relationships is horrible.

Good thing Bella Jewel knows how to keep a reader entertained because Carly Robins needs to find a different job. She has two volumes--regular and extremely loud. Unfortunately, she mistakes volume for feeling...any feeling. I won't be listening to any other books with her as the narrator. If you go ahead and buy this keep your finger on the volume button. Oh and I didn't understand why the lead male character had a bad foreign accent if he was from Colorado.

Carly Robins needs to know volume/yelling is not a substitute for emotion or excitement. Men's voices are masculine, not screeched. Couldn't get past chapter two. Bummer since I really wanted to hear this story.

Story was ok. However the narration made this a difficult listen for me. very predictable.

It started a tad slow but more than made up for the slow start. I absolutely fell in love with Raid and Grace. Bella did a wonderful job portraying the characters. I felt as thou I knew them personally by the end. I think I might almost miss them. Looking forward to book 2.

I loved the sassiness, loved the sexual tension, and I loved the performance of the narrator. What I didn't love was how absolutely, mind-numbingly bored I was by the time I got toward the end of the book. With about 1.5 hours left, I debated continuing and just finishing the book off or not but decided against it. I was just over the whole thing. I'd enjoyed it and then all the sudden I didn't. I wasn't drawn in with the same intensity of a book that you can't stop reading or listening to. It was good, but that's it. Just good.

I was thrilled to find one of my favorite romance author's on the shelf. The narration was pretty good as well.

Dont do it - you have been warned

This book should not be listened to whilst driving as it so bad you tend to drift off and think about other things - now your not concentrating on driving or listening and just off in your own little world. Fewer words its just crap

What could Bella Jewel have done to make this a more enjoyable book for you?

Would you be willing to try another one of Carly Robins’s performances?

Hopefully she can act - cause I aint listening to her again

Did Hard to Fight inspire you to do anything?