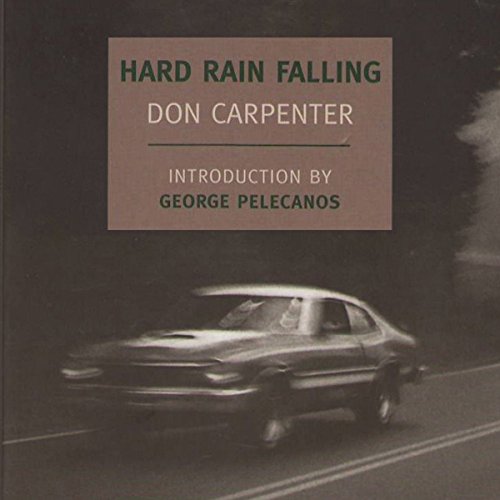 Don Carpenter's Hard Rain Falling is a tough-as-nails account of being down and out, but never down for good - a Dostoyevskian tale of crime, punishment, and the pursuit of an ever-elusive redemption.

The novel follows the adventures of Jack Levitt, an orphaned teenager living off his wits in the fleabag hotels and seedy pool halls of Portland, Oregon. Jack befriends Billy Lancing, a young black runaway and pool hustler extraordinaire. A heist gone wrong gets Jack sent to reform school, from which he emerges embittered by abuse and solitary connement.

In the meantime Billy has joined the middle class - married, fathered a son, acquired a business and a mistress. But neither Jack nor Billy can escape their troubled pasts, and they will meet again in San Quentin before their strange double drama comes to a violent and revelatory end.

"A powerful, uncompromising book, realistically written, brutal in the raw intensity of its action...highly recommended." (Library Journal)
"Don Carpenter is a particular favorite of mine. His first novel, Hard Rain Falling, might be my candidate for the other best prison novel in American literature." (Jonathan Lethem)
“Hard Rain Falling is a unique read; violent, tender, inexorable, and melancholic; a beat-era book of disaffected young men devoid of On the Road euphoria but more poignant and gripping for its fatalistic grounding. The small lives contained herein are indelible.” (Richard Price)

A Well Read, American Noir Novel from The 1960s

This is a debut novel of Don Carpenter. It is set in the Western United States in the 1960s. It has a hard, grim edge to it. I liked the novel, but would not want a constant diet of this type of novel.

As far as an audiobook, it is very well read. I did read along on Kindle. The narration is faithful to read the written text. The narrator, Elijah Alexander, is a competent professional and did a fine job.

I came across this novel while reading a different novel by George Pelecanos, "The Man Who Came Uptown". I could see stylistic similarities between these two novels and liked them both about the same. Which is to say, I liked them a good deal. Thank You...

A glutton for punishment

I must be just that because this was so incredibly brutal. But I couldn’t stop. So real. So hard. The way Carpenter paces the narrative is incredible. A couple chapters ago feels like eons. Each character is so well defined as is any scene as is the nuances of each relationship. Ultimately though it was tough as nails, immersive and thought-provoking. Should be required reading. Especially in our culture where half of our government and half of society has zero empathy for those who weren’t given much of a chance to survive. Well done Donny boy! An American classic IMO.

I really struggled to get through this book. I hate to give up on a book, but I almost didn't make it to the end of this book. I couldn't find the theme of the book, or develop any interest in the direction of the story. The author seems to wander all over, and I kept waiting for some of these "detours" to have some significance to the story - but there seemed to be no common thread to many of the subplots. Not a good use of a credit.

I thought this book was terrible. The main character did not seem to develop. Just one bad scene after another. He had no redeeming qualities.

This was hard to listen to in that, it was pretty depressing, reliving the abuse of Jack as a child and how it affected him in later life. In fact, Jack should have been quite unlikable due to his behaviour; but there was still this feeling of sympathy for him and his lost childhood, that enabled you to keep rooting for him.