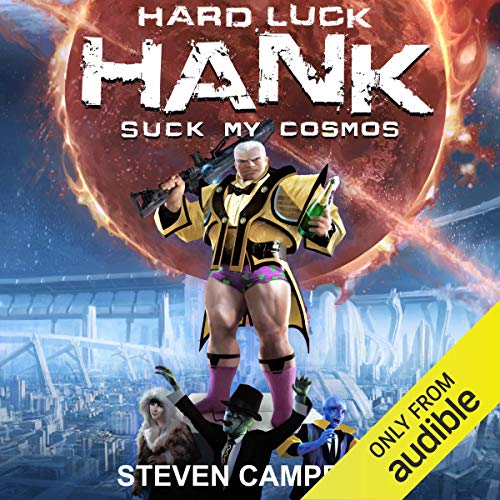 Life is tough on space station Belvaille - not for the aristocratic nobles that call it home, but for the poor slobs like Hank.

Hank is considered a celebrated cutthroat and the oldest living person in the city. His occupation is to be hired muscle for those people who don't want to get their hands dirty but still want dirty things done. He possesses a mutation that allows him to be bulletproof and weigh thousands of pounds, two helpful traits in his line of work.

When the wife a city councilman approaches him about spying on her husband, Hank worries he's flying too close to the flames for safety. When the husband is assassinated, he's sure of it.

Hank has to keep himself from getting framed for the murder while he finds himself increasingly manipulated by powerful people as the machinations of the city council start to spill into his daily life.

Hank manages to be formidable vulnerable flawed and awesome. Liam Owens 'friendly meathead' voice is pleasant and the comedy is genuinely funny

HLH is my favorite person ever!

HLH is such a great series! I laughed so hard and loud through this book it was almost embarrassing to listen around other people. The story and characters were all great. I give this book 5 huge stars!..... The only issue I had was that there was a buzz sound in the background through the whole book but that's not the authors fault! Sounds like it was a crappy mic being used.... Took a while to not be constantly distracted by it...

This book is a winner

First review - had to write it

I have to give the author due, this is the funniest damn series ever written. Don't get me wrong, I freaking love Hitchhikers Guide but I'm on my second listen with this series and it's more funny the second time. I'm honestly not sure if the book is that great, or if the reader is just so perfect that he makes it that great, but the books will keep you laughing non-stop.The main character as read by the reader is probably my favorite character from any novel, he's just so shamelessly self aware that every one of us can relate, and as we laugh at him we're really laughing at ourselves.If you haven't yet, listen to a second time... you'll be glad you did. If you haven't read this yet, start now. Do start at book 1 though.

At first I wasn't sure about Hank, but after I got to know him he became so freaking predictably funny. The narrator Is by far the best I've ever heard for matching the character which is saying a lot because I've heard Lou Diamond Phillips and Will Wheaton give excellent performances!

Good story but with issues

I would recommend adding a chapter to the end that closes the key plot holes that are left wide open at the end. Maybe they will be closed in the next book, but so far each book in the series seems separate from the others. Also the audio quality seems a bit miss matched in many of the sections. Like they rerecorded parts of the audio at a different location then spliced it into the main recording. For example, part of the same chapter would be good, then suddenly in the next sentence the voice quality drops dramatically and sounds a bit different. Same voice actor but its like they recorded it in the bathroom on a Iphone mic or something..

I love Hank and all his bumbling around. I wish they would have closed the plot holes at the end of the story. It just seems like the author rushed the last chapter.

Narrator is great. However I wish he would have recorded the whole story in the same room with the same audio quality.

Was Hard Luck Hank: Suck My Cosmos worth the listening time?

Sure was. I enjoyed it, and that's what counts.

Not a bad audio book, but maybe lower the price to reflect the poor audio quality, and gaping plot holes at the end of the book.

I really hate to give this review because HLH is such a great character with so much potential. Unfortunately, after the first of the series (Screw the Galaxy) the series went downhill, and it is all due to the writing. I am sincere when I say it pains me to say (write) that but I just don't see it improving (if any more HLHs are coming). Specifically, the writing/plot problems are characters and situations are introduced and then never mentioned again. I don't like reading reviews that have, so I will refrain from being specific but if you have read HLH 2 and 3, then you know what I am talking about; just know it gets worse in this one.

Personally, I am glad HLH is a success and wish nothing but the best for any author and his "labor of love", but I think Mr Campbell's works would benefit greatly from an editor's insights on the plot aspects of the books. I completely understand that HLH is selling so why should an author change what is working? All I can say is I no longer enjoy listening to HLH. The randomness of what in the plot gets explored and what gets forgotten is just too glaring a deficiency. For what its worth, the audio narration is still top notch and the only reason I was able to finish the book.

It's Hank again. What can you say? This far into the series and even I have a hard time with stairs now.

Hank isn't the star of the story

Hank is portrayed as increasingly incompetent to the extent that it no longer makes sense to have him as the hero of the story. His side kick the butler is more interesting than Hank. For somebody who has been around for several hundred years you would expect him to be more mature than this. for this novel and the previous one Hank has actually mentally regressed and there have been some unresolved plot elements that just make you scratch your head.

this story is intriguing moves well and is actually very suspenseful while simultaneously being hilarious.

Steven Campbell has created one of my most favorite universe's in the science fiction genre. Hank is such a likable character and a hilarious anti-hero. from the first book to this one you'll be taken on a hilarious journey full of action, humor, excitement and mystery that'll keep you on your toes. and each time you finish a Hard Luck Hank adventure, you'll be wanting more. I'm personally looking forward to the next book in this series.

Enjoyed the story as usual. If this was the first book I would rate it higher. but, hank who used to be grouchy was at least competent in previous books. now he just seems dopey. Garm who was always tough now comes across as mean. The characters just don't seem as interesting as precocious books.

Hank ..you can't not laugh

Enjoyed this book but almost gave up on it due to a low grating noise in the background intermittently through the first hour or so even after deleting and reloading!
Seemed to clear up at some point, glad I persevered as it’s another great hank story!

Best one of the series so far. love these books. Can't wait to read the next

more of the same, mostly

while always enjoyable, this series is wearing a little thin. after the first trilogy, the reset was just OK. hopefully the next will have a fresher spark.