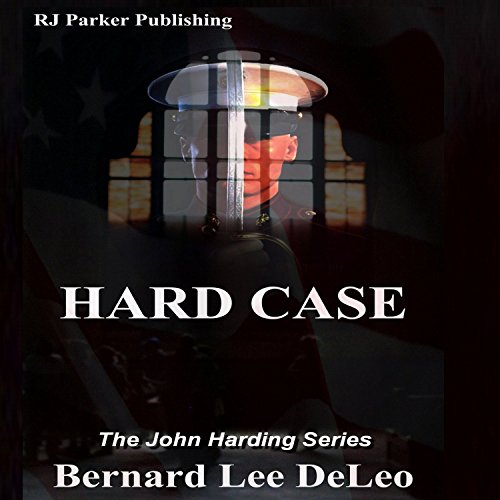 Hard Case begins in a back alley warehouse in East Oakland, CA, where Harding fights for money, and to keep his skills honed, coupled with the fact he likes it. Harding does odd jobs with the only guy he trusts implicitly, his handler and manager, Tommy Sands. They bodyguard, escort tourists around the Bay Area, and do bail bond, skip trace work for a lawyer named Tess Connagher.

Two events throw Harding's seamy life in the shadows out into the light. Strobert is ordered to enlist Tess Connagher's law firm to act as an intermediary with Harding in order to protect an outspoken Afghani woman whose family Harding protected long ago. The woman's father requested him, and the state department realizes they'll be off the hook if anything happens to Samira Karim while under Harding's care. Secondly, Harding fights a particularly brutal fight with a Russian mob backed fighter named Van Rankin who hates Harding. They'd had words.

The YouTube video of Harding's subsequent beat-down of Rankin goes viral along with many of his prior fights. When Rankin's Russian mobster backer, Alexi Fiialkov pushes for a rematch on the UFC circuit, CIA Agent Strobert sees infinite possibilities since the United Arab Emirates has part ownership in the UFC. Some matches would be taking place in Dubai, where the CIA knows targets of opportunity show up from time to time.

What listeners say about Hard Case

If John dies at the end, there will be blood!

What made the experience of listening to Hard Case the most enjoyable?

Kevin Pierce really brought the characters to life, and hit all the right notes in menace and humor! Pretty cool!

John of course. Tess really got on my nerves sometimes, and she never stopped through all the other books. Can I bitch slap her?

Which character – as performed by Kevin Pierce – was your favorite?

The Dark Lord was awesome! I laughed so hard people were staring when I was in public! I also really loved Al, and The Cleaner, Director, Crewella, I'll call her whatever she wants!

It made me laugh, and made me cheer when the idiots were dealt with with extreme prejudice! Mr Deleo pulls no punches, and I really like that he hits so hard!

As stated before, if John dies at the end, there will be blood!! Keep them coming, hurry up I'm waiting!!!

Harding is a bit of a Jack Reacher type with a sometimes humerous view or comment. An easy listen which kept me interested without having to concentrate too hard. Good effort from Bernard Lee DeLeo and narrator Kevin Pierce. Happy to look at bok 2.

Second Time is even better

I enjoyed this book the first time I listened to it. I enjoyed it even more the second time. I've listened to all the Hard Case and McCarty books and hope the author will consider writing more.

This is what I'm talking about

Would you listen to Hard Case again? Why?

Yes, but not until I listen to the rest of the series

Everything. I listened to Craig Johnson talking about his first book and the editors wanted him to trim the book, I look forward to De Leo's his next book.

What does Kevin Pierce bring to the story that you wouldn’t experience if you just read the book?

It never stopped. Hooked from the beginning

He needed to take care of the neighborhood gang bangers

John is a badass and a all American who rides for the brand. A fast read book.

Episodic, but full of fun and action

What did you love best about Hard Case?

John Harding was fun - a hard guy, but not as morose a Reacher. He has friends and a team too. Like the Detachment with John Raine. Some of the episodes needed to be tied in better. But it was a great listen.

What other book might you compare Hard Case to and why?

Barry Eisler's John Raine is similar, but Eisler has had more time to develop as a writer. On the other hand, Harding has more fight scenes.

Would you listen to Hard Case again? Why?

A great start to the series and yes i would return to listening to again. Can't wait to read more from the series.

What other book might you compare Hard Case to and why?

Which character – as performed by Kevin Pierce – was your favorite?

I didn't want to pause the story and when I would have to a was anxious to return to listening.

I recently purchased a big name authors James Patterson new book and was a bit board by the predictable characters and pace and stopped listening to jump into this book and glad that I did.