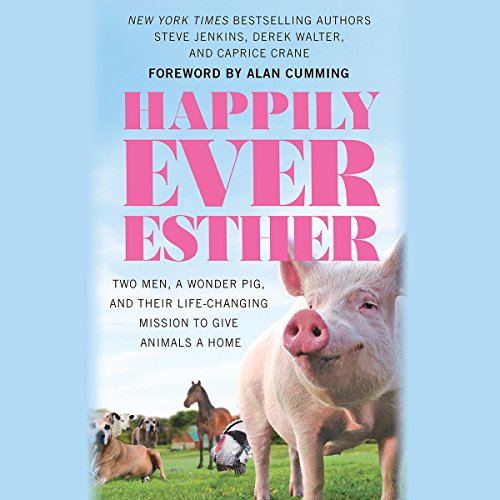 Steve Jenkins and Derek Walter had their lives turned upside down when they adopted their pig-daughter Esther - the so-called micro pig who turned out to be a full-sized commercial pig growing to a whopping 600 pounds - as they describe in their best-selling memoir Esther the Wonder Pig. The book ends with them moving to a new farm and starting a new wonderful life where they will live on the Happily Ever Esther Farm Sanctuary to care for other animals and just live happily ever after.... Or so they thought.

People often think about giving it all up and just moving to a farm. In theory, it sure does sound great. But as Derek and Steve quickly realized, the realities of being a farmer - especially when you have never lived on a farm let alone outside of the city - can be frantic, crazy, and even insane. Not only are they adjusting to farm life and dutifully taking care of their pig-daughter Esther (who by the way lives in the master bedroom of their house), but before they knew it their sanctuary grew to as many as 42 animals, including: pigs, sheep, goats, rabbits, chickens, cows, roosters, a peacock, a duck, a horse, a donkey, and a barn cat named Willma Ferrell.

Told with joy and humor and filled with delicious Esther-approved recipes dispersed throughout the book, this charming memoir captures an emotional journey of one little family advocating for animals everywhere.

What listeners say about Happily Ever Esther

Heart and soul captured in a single book

People who read Charlotte’s Web as a child and wept for the creatures in the story will find, in Esther, Derek and Steve, the adult equivalent. This book opens your eyes and forces you to face the consequences of the choices you make. It skilfully brings together joy and tragedy to show us all how love and determination can genuinely change the world. Everyone should read this book. It opens your eyes. It challenges your belief. And it gives you faith that there are good people in an often mean and sad little world. Steve’s narration was beautiful. You could truly feel the depth of love he has for Esther. I loved this book.

What a wonderful book. Incredibly well written and read. Good job, Dads. Looking forward to the next one.

I enjoyed this book so much!!

Steve is an amazing writer and has the most gentle way of getting his message across! He has hilarious stories and I love his Canadian accent! Me a pig owner myself just made me love the Esther stories even more!!

I loved the story and every story about Esther the Wonder Pig. It was very entertaining, sweet and fun to listen too.

i loved this book

Sweet quirky stories with a heart. I learned a lot and felt included rather than judged.

Love, love, love, this book! Steve does a beautiful job narrating the book that he and his partner Derek. wrote together. I could never say enough of wonderful things. about this book or these two gentlemen, so just listen to it!

Honestly? I didn’t order this book. A friend who owns a pig pet shared it with me. I learned a lot! I understand my vegan granddaughter much better. It was entertaining, comical at times, and drives home a message we all need to hear. Am I going to become vegan? Probably not, but I better understand and respect that choice. Always an animal lover, it’s food for thought. No pun intended...

Amazing Story But Full of Complaints!

I’ll start by saying that I’m vegan, an animal rescuer, and an activist. I’ve also followed Esther and her dads from the beginning, have donated to all of their fundraisers, and loved their first book. This book, however, felt like a compilation of complaints. Complaining about (and naming) certain volunteers (so so so unprofessional), complaining about friends, and complaining about other rescuers (rabbit groups, etc.). It felt like a huge book of complaints. Having said all of that, I love Esther and her family.

After following Esther on Facebook and reading Esther the Wonder Pig, I was anxious to hear more about her amazing story. This book illuminates some of the trials and tribulations with running a sanctuary but emphasizes Steve and Derek's determination in making it successful. I loved this book.

A love story that makes you both laugh and cry. Esther is truly lovely and amazing. Dad's are the best!!

Love Esther and what Steve and Derek have done with letting more people know about pigs and about their sanctuary.