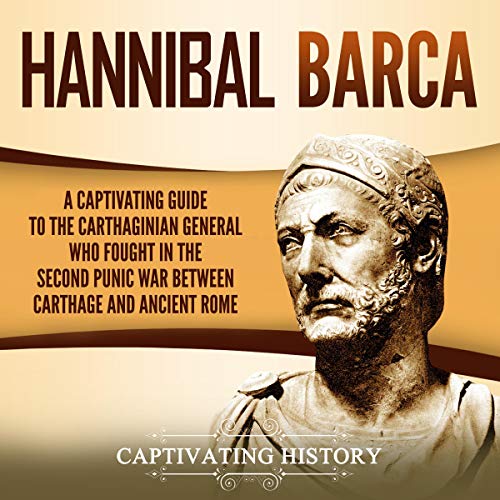 Hannibal Barca: A Captivating Guide to the Carthaginian General Who Fought in the Second Punic War Between Carthage and Ancient Rome

If you want to discover the captivating life of Hannibal Barca, then pay attention...

One of the names most synonymous with brilliant military strategy is Hannibal. He was the legendary Carthaginian general who marched elephants over the snowy Alps and took on Rome, the growing power in Europe at the time. He outsmarted the best strategists that Rome had to offer and twice sat in front of the gates of Rome with his army.

There was never any doubt that Hannibal would serve his country in the military, but no one could have predicted just how well he would serve Carthage. Even centuries later, Romans used the phrase “Hannibal’s at the gates!” as a way of indicating misfortune or fear. Even natural disasters were compared to him. His actions would go on to haunt the Romans for centuries. Because of the threat he had been to them, the Roman Republic was forced to learn how to outsmart their opponents and not just beat them. The actions of Hannibal helped to shape and form Rome into the military power that it became because they realized early on that they were not as safe as they had thought they were.

In Hannibal Barca: A Captivating Guide to the Carthaginian General Who Fought in the Second Punic War Between Carthage and Ancient Rome, you will discover topics such as:

So if you want to learn more about Hannibal Barca, scroll up and click the "Add to Cart" button!

What listeners say about Hannibal Barca: A Captivating Guide to the Carthaginian General Who Fought in the Second Punic War Between Carthage and Ancient Rome

Great short review on one of the best

Though short, a fair amount of detail on one of the world's greatest strategist. A very well-organized story that was narrated fairly well.

Really enjoyed this short synopsis of the warrior Hannibal! Major campaigns explained and bought to life!

I really enjoyed the details of his life, not just

Loved the story and info! Hidden history brought to life! A black man like no other.It forms a good base for further research. Like all of the books in the Hourly History series, the reader is provided with a bite-sized taste of greatness.

Another great installment of Hourly History

Great book about why Hannibal Barca's name is still known all these centuries later. If he had succeeded in toppling the Roman Republic, the world would be a much different place today.

A great but short history of Hannibal Barca. It contained just enough history of this remarkable man, to wet the appetite to want to learn more in depth history of his life.

These hourly reads are a great way to get a snapshot of history. Download them often and enjoy a good read .

Really enjoyed this short synopsis of the warrior Hannibal! Major campaigns explained and bought to life.it was good and interesting!

Learned a lot about Hannibal.

This audiobook gives insightful information on this historical strategist, Hannibal who challenged fate by attacking the Roman Republic. It's really worth listening!

The rise and fall of Hannibal Barca

I really enjoyed the details of his life, not just his triumphs and defeats. No mention of the great city named for him, Barcelona.

I highly recommend this

The conflicts among the characters were particularly intriguing; they left a special impression on me from this audiobook. I strongly suggest this to any lover of historical fiction!

A Masterpiece of Biography

an interesting account of the life and exploits of a warrior we've all heard of but probably don't know much about. One of those books that you regret finishing. More maps would have been a plus but the lack of them didn't detract much.

Very detailed. For the type of book it was, it was a good historical read. The Arthur had compiled an amazing history.of events.

Excellent book for any history buff.

The book is highly recommended to any reader that wonders where have our true leaders gone. Hannibal is a historical masterpiece of Hannibal, and the superpowers at the time, Rome and Carthage.

Well researched. Writing is simplistic at times but descriptions are thorough and informative. A very interesting subject.

Great story and interesting compilation of research. Had to use an atlas to figure the areas as the European continent is today.

This audiobook was a very detailed about Hannibal as a total person.Quality information was provided as to his later life and his death. A good book to listen about Hannibal, not just the warrior Hannibal.

Hannibal was an incredible man and I was delighted

t was entertaining and I hope it was historically correct. Hannibal was an incredible man and I was delighted with the way the author treated him.

The book provides an outstanding discussion on why Hannibal did not directly attack the city of Rome. It also presents Hannibal's campaign as one historical example when one side wins almost every battle but still does not win the war.

A good biography of an historical icon

I found it focused more on his movements and battles, which were clearly articulated, and less on the man himself. Would have liked more on his lifestyle, his family and relationships around him.Overall a very good book to understand Hannibal and his exploits in Europe.

This book does an excellent job of peeling back some of the hidden layers on Hannibal himself, a truly enigmatic character who would’ve stood out as an extraordinary individual in any era.