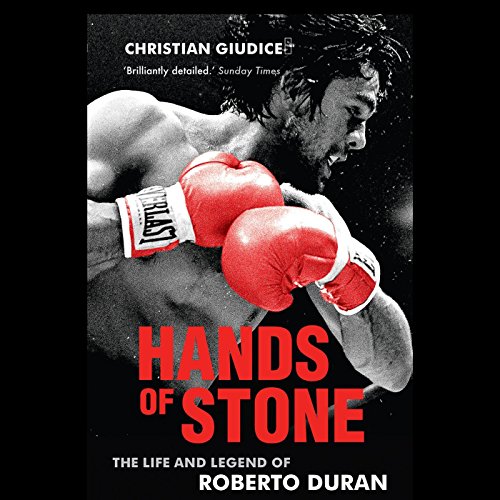 The Life and Legend of Roberto Duran
By: Christian Giudice
Narrated by: Ozzie Rodriguez
Length: 14 hrs and 48 mins
Categories: Biographies & Memoirs, Celebrities
4.5 out of 5 stars 4.7 (3 ratings)

Roberto Duran is a sporting legend. Often called the greatest boxer of all time, he held world titles at four different weights and is the only boxer in history to have fought in five different decades. His bouts with fellow greats like Sugar Ray Leonard, Thomas Hearns, and Marvin Hagler have gone down in fistic folklore. He finally retired in January 2002 at age 52, with a professional record of 104 wins (69 by KO) in 120 fights. They called him Manos de Piedra: "Hands of Stone".

Now journalist Christian Giudice has written the first - and definitive - story of Duran's incredible life, both in and out of the ring. He has interviewed the fighter, his family, his closest friends, and scores of his opponents to separate truth from myth.

Duran was born in utter poverty in Panama and grew up in the streets, fighting to survive. His talent with his fists soon emerged, and he had his first professional fight in 1967. Duran grew into a fighter's fighter. His hunger to destroy opponents and his willingness to take on anyone, anywhere, made him a huge favorite while his flamboyant lifestyle outside the ring made headline news.

Duran was one of the first Latino fighters to become a mainstream sports star in the United States, and his natural talent, unprecedented achievements, and longevity made an indelible mark on the world of sport.

"A riveting read from the first page to the last." ( The Ring)
"An extraordinary tale." [ The Times (London)]
"A compelling book; at times it's a profoundly detailed reconstruction of Duran's world." (Gerald Early, Belles-Lettres)

Brilliant at times did drag near end

Fantastic in every way and a great listen. Would love to meet the great man. Fabulous narration keep me on the edge of my seat

A compelling and thoroughly enjoyable listen!

The narrator does a great job of taking you back to a past that reveals how poverty, natural talent and hunger for success propelled Duran to greatness.
The recounting of the actual fights are impressive and the story is littered with many an accetedote as well as touching moments.

I now know the story of Duran alot better than before. My previous interpretations of Manos de Piedra was his fights as one of the "Four Kings" against the greats Haggler, Leonard and Hearns but there is so much more to his story than that!

Duran is one of the best boxers of all time, in the ring he had a viciousness it was hard to rival. like many boxers, Duran had a extremely poor and tough upbringing. This book looks into his life and upbringing and how he went from a small child begging for food outside local resturants to a millionaire that always gave back to his roots.