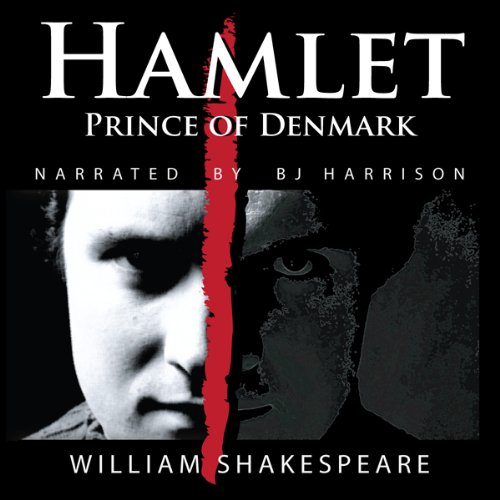 By: William Shakespeare
Narrated by: B. J. Harrison

The dead do not sleep in Denmark. Thrice the vision of the suddenly departed king has haunted the night watchmen. Upon seeing his own son, prince Hamlet, the ghost calls him away to divulge most nefarious secret. This most noble king was murdered by his own brother, Hamlet's uncle, who now wears his crown and beds his bride. To the prince he charges with the unholy quest to avenge his death and kill his murderer. Young Hamlet, shocked and amazed, swears to do the bloody deed. Thus begins one of the greatest works by the greatest English author - William Shakespeare.

Fans and critics both applaud B.J. Harrison's interpretation of Hamlet as "riveting", and praise his "incredible talent for voicework and characterization". But not only is the text well interpreted and presented, the play has been optimized for the audiobook format. To make the text more understandable in the audio format, an introduction by Charles and Mary Lamb is read at the beginning of each act. Also, each speaker is clearly marked with his own voice and narrative tags. This is the perfect way to discover the wonders of Shakespeare in an audio format. Students and Shakespeare veterans alike will enjoy this powerful production.

What listeners say about Hamlet, Prince of Denmark

What made the experience of listening to Hamlet, Prince of Denmark the most enjoyable?

Loved it! I would listen to everyone of Shakespeare's plays like this. This is the reason to have audible how else could you listen to Hamlet done so well while gardening or driving to work

BUY THIS VERSION OF HAMLET

Short synopsis before each act so you never get lost. Great sound quality, good voices.

I am truly in awe of BJ. Harrison's magnificent performance. He has truly captured the atmosphere of emotions that swirled around each character.

Great way to read this classic

I found this an enjoyable way to listen to this classic play. There is an intro to every act that gives a synopsis for what's to come- great for anyone intimidated by Shakespeare. I found the narrator made me hear the play in a new way and think this is your best bet if you don't mind one narrator for multiple parts!