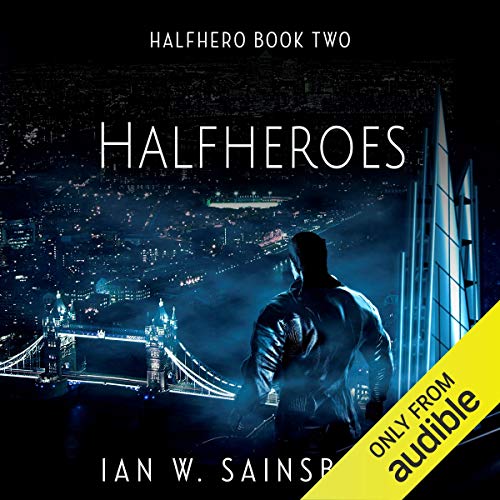 The world’s only superhero was discovered in 1969. No others were ever found. Until now.

With Station destroyed and their friends dead, might Daniel and Abos finally be allowed some peace? Yeah, right.

Daniel’s talents are needed by a UN department taking on the bad guys, including rogue halfheroes. Abos is searching for more of her species. She soon finds she’s not the only one looking. There’s a new threat that no one saw coming. And halfheroes are being targeted.

When Daniel goes missing, it’s down to Abos to find out what’s going on and try to stop it. Her only chance of success means risking everything she’s gained since she stopped being The Deterrent.

Meanwhile, Daniel’s staging a breakout from the most secure prison ever built, but what’s waiting for him is even worse. It’s time for Daniel to find out if he’s a halfhero or a real hero.

I started this series after finishing the World Walker and finding to my surprise that this incredible author had literally nothing else on audible, or even in print that I know of. I then found out that he was just beginning his writing career at a later stage in life. well, there's no telling what the world has missed out on, because Ian Sainsbury has "IT"! I don't generally go for superhero stories but I absolutely love Daniel and ABOS and all the other wonderful characters in this story. I'm a character man. you can have a good story, but if your characters are shit, then your book is shit. lol! anyways, just wanted to say well done Ian. you said you read these so I'm counting on it. Keep up the great work, and bring us something huge and epic soon! Much love!

great book, almost as good as the first, looking for the 3rd. I like this author.

well so far I have read the world walker series and now onto book 3 of this series. I read and listen to 2 or 3 books at a time and found if you are into Ian's writing style it will keep you entertained. a lil bit of a bog down near the middle but stick with it and it will improve. On to Johnathan's performance I gave him 3 stars for lack of inflection he seems to just be reading and not really performing maybe the next time he can maybe try a female voice or adding some dramatic spunk to his voice ,that was the main trouble I had to finishing the book.

I like the premise, the idea its a fantasy set in modern times. I have always liked sci fi but what grabs me about this book is how well the characters are defined
I’m looking forward to book 3

I love it when I find an author I can trust with my time. Ian is one of those, with this series. Looking forward to book 3

I am hooked and can hardly wait for the next in series! I also hope a new World Walker installment is coming!

Really enjoyed the story, absolutely steamed through it

Unfortunately, and this may have been isolated to me, it seemed that during editing a lot of words ended up being clipped incomplete. It was often enough to become bloody irritating and I can only assume someone did a poor job splicing all the audio recording together. I hope if you listen your experience is different

i have been well and truly sucked in to the ABOS Universe, it's a unique perspective on super heroes with excellent characters, i am disappointed that Cressida is no longer part of the story as I really liked her character. looking forward to the third part 👍👍👍

Ok, not as good as the first one

The story has moved on nicley but it is very slow. the narrator is good but in quite a few places the ends of his words are clipped off.

Am loving this series, especially the trolling of Trump :) or maybe that was just me. Can’t wait to see where the story goes. Triple D is a brilliant character addition. Loving the narration as well. 👏👏👏

I probably consider Mr Sainsbury’s World Walker series his apprenticeship. Well worth a read and quality books in and of themselves.

However, with this series, I really feel that the craft has been polished.

Not as good as Charles Stross, or Richard Morgan, but damn, it’s getting close.

Characters you care about, a story that has an proper arc, paced nicely in every way..

Thoroughly enjoyable, and the performance is spot on. There are so many decent books ruined by bad narration. If anything, this one is improved by it.

Can’t wait for the third in the series.

And I don’t write reviews unless they’re very very good or very very bad. This is definitely the former!

Good a little flat in places but worth the time.

thoroughly enjoyed this book. I love the premise of the series. cant wait for 3

Really enjoyed the first book in th series and so got the second. Started really well, lost its away a little in the middle.and.came back around for. The ending. Enjoy the tone of the narrator who naturally made the characters easily identifiable. I tend to chose my Audible books initially by the narrator voice as acts all, I am to sit and pay attention t
Looking forward to the concluding book in the trilogy

Good second installment. Well thought out main protagonist. Interesting back story. Did lack some action and the Halfheroes themselves were underutilised as a force. I am looking forward to finding out how the trilogy ends!

Loved book one. Book two does not disappoint. From start to finish could not stop listening. Now eagerly await book three.
I W Sainsbury just like the World Walker series your imagination is awesome. Thankyou. Narration brilliant too 🙂