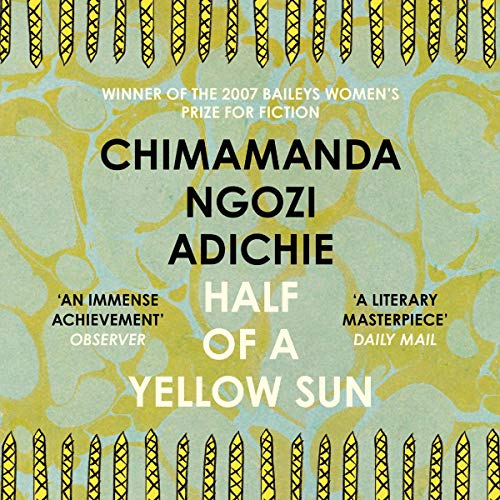 Half of a Yellow Sun (Abridged Edition)

Winner of the Orange Prize for Fiction, 2007.
A Richard and Judy Book Club selection.

This highly anticipated novel from Chimamanda Ngozi Adichie is set in Nigeria during the 1960s, at the time of a vicious civil war in which a million people died and thousands were massacred in cold blood. The three main characters in the novel are swept up in the violence during these turbulent years. One is a young boy from a poor village who is employed at a university lecturer's house. The other is a young middle-class woman, Olanna, who has to confront the reality of the massacre of her relatives. And the third is a white man, a writer who lives in Nigeria for no clear reason, and who falls in love with Olanna's twin sister, a remote and enigmatic character.

As these people's lives intersect, they have to question their own responses to the unfolding political events. This extraordinary novel is about Africa in a wider sense, about moral responsibility, about the end of colonialism, about ethnic allegiances, about class and race - and about the ways in which love can complicate all of these things.

"Tender and harrowing by turn you listen with a throat tense with fear, never knowing the outcome of any moment as neighbour turns on neighbour and the smell of death fills the air. Adjoa Andoh reads it to perfection - every character given a voice, a life, that sings out in a dozen perfectly held accents, from the village Igbo to English received pronunciation." ( The Express)

What listeners say about Half of a Yellow Sun (Abridged Edition)

Absorbing characters and story and very well written. My only criticism would be the broken narrative of the text, which I thought was unnecessary.

The narration of the audiobook was fantastic.

Liked the narrative of the Biafra war. Also enjoyed the different relationships and dynamics of them.

I learnt many things about the Biafra war & famine through this poetic story of 2 sisters divided by war. It is ugly& harsh in places, as war is. Overall though there is hope in humanity.
The melodious voice of the narrator is the best I have ever heard. She changes effortlessly from English to Nigerian & Biafran idiom. Highly recommended book.

Interesting to learn about the Biafran war and how it affected the Nigerian people. Wonderfully developed characters and story. Marvellous narration brought the story to life.

The subject matter was really interesting and characters understandable despite there flaws in a desperate time. I didn't find the shifting timeline beneficial to the story.

Shame it is an abridged version.

Too many different accents were attempted to the detriment of clarity of diction and pronunciation.

This book left me with so much to think about. The characters where so real and the narration absolutely captivating. Highly recommended!

A missed opportunity of a war story

This is firstly a war story. The story of a national identity Adichie has set out writing about is somewhat lost in the ridicule she worked into the desperate strife for respect & recognition of the Biafran characters. The choice of a Ghanaian narrator made the many dominant Igbo characters sound like Ghanaians, which sadly added to the overall indefinite message of what would have been a well written work.

Great story. I didn't even know anything about Biafra ever existing. I love all of chimamanda ngozis Adichies books and the narrator was good too. Definitely recommend

The reader brings this story to life

We all know of 'Biafra' but this story makes one live the sad drama that made rich men poor and poor men dead. The reader brings to life the language of the people, one of my most memorable 'audible books' of the last 6 years.

Its a story of a beautiful troubled land populated with fully fledged and fascinating characters. The people you will meet in this story are alive and you will follow their lives with intense interest. But the situation and the world they are immersed in are real. Real tragedies, real heroism, real struggle for freedom and peace, real faith and disillusion, real love and compassion, real sacrifice, real brutality and real raw war. Your guide in this world will be intimate and sensual details: colours, food, body language, clothes, family dynamics, glimpses of landscape, fragments of poems, personal experience, individual tragedies. It is the best book I have heard this year so far and one of the best ever.
It is brilliantly read by Adjoa Adoh who acted out the multidude of characters, accents and moods with her beautifull voice.

An intriguing story, beautifully written and narrated. I bought and downloaded it before realising it was an abridged version (relatively new to Audible) and would have returned it if possible, but in hindsight I'm glad things worked out this way.

Recommend this as a thought-provoking and absorbing listen. I expect that, given some time, I'll also read the book so that I can experience the story in its entirety and take the time to savour the language.

I bought this book on Audible as it was the January choice of a book club I attend. This isn't the sort of book I'd choose and the historical theme would have put me off if I'd seen it in a bookshop. However, I can't recommend it enough - the narrator is fantastic, and really brings a warmth and charm to the story, which is very much a 'human' story in amongst a tale of Nigeria & Biafra's war in the 1960's. Not too long, always compelling - really really good! Download NOW!

I really like the author - her literary style, her charisma, thoughfullness and strong, memorable messages. This is one of her best books I thought and could not agree more with previous reviewers - definitely worth the listen!!!

Memories of a new world

The best things in life are those that you have to work hard for...this is a book that I struggled with at first glance but once the intial ground was covered then the narrative took hold and its rich source of new perspectives, information, approaches and language became a real pleasure. Authentic voices don't compromise - the reader feels 'changed' in the act of understanding and Chimamanda Ngozi Adichie's gain is that the narrative and its characters are delivered on her Nigerian terms.
A welcome new voice - in these days of troubled oil and troubled waters off West Africa its really good to get the inside story. Well recommended.

I would definitely recommend this particular book as an audio version as the accents and narrative are just amazing and really bring the book to life.

Really enjoyed this. Brilliant book and brilliantly read! Would highly recommend to anyone interested in Nigerian history.

The story how war can devastate families and a country. No one is spared. Haunting.

Beautifully read, well paced. Obviously, the fibber matter is disturbing, and the reader breathes life into the prose, with respect and dignity.