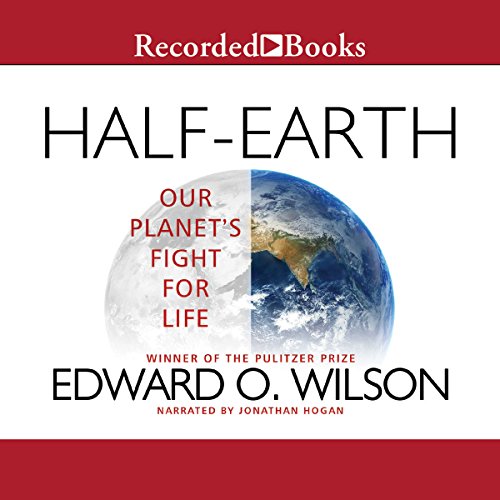 Refusing to accept the mass extinction of species as an inevitability, "the world's greatest naturalist" (Jeffrey Sachs) proposes a plan to save Earth's imperiled biosphere. Half-Earth resoundingly concludes the best-selling trilogy begun by The Social Conquest of Earth and The Meaning of Human Existence, a National Book Award finalist.

History is not a prerogative of the human species, Edward O. Wilson declares in Half-Earth, a brave work that becomes a radical redefinition of human history. Demonstrating that we blindly ignore the histories of millions of other species, Wilson warns of a point of no return that is imminent. Angrily challenging the fashionable theories of anthropocenes, who contend that humans can survive alone in an Edenic bubble engineered for their own survival, Wilson documents that the biosphere does not belong to us. Yet, refusing to believe that our extinction is, as so many fear, predetermined, Wilson has written Half-Earth as a cri de coeur, proposing that the only solution to our impending "sixth extinction" is to increase the area of natural reserves to half the surface of the Earth.

Suffused with a profound Darwinian understanding of our planet's fragility, Half-Earth is a transformative work that reverberates with an urgency like few other books.

What listeners say about Half-Earth

Important and interesting book, but the book features too many lists, and the narrator is a bit too slow and boring.

I loved it. I always enjoy EO Wilson books and this was true to form. Well as a teacher does it and easy to grasp and follow. Scary book but important to read and share

I enjoyed the narrator and the content. A fantastic idea to conserve our biodiversity. listen!!

I love this book and the audio version did not disappoint! this is highly recommended.

E. O. Wilson is an excellent writer with something so important to say, that we should all stop and listen. His observations of the natural world and how badly we need it, really turns your head around. It can turn your life around. It's filled with timeless quotes like "nature does not belong to us, we belong to it."

E.O. Wilson walls the reader through a story of declining biodiversity and efforts to save it. He makes a compelling argument for the need to do more and soon. For those that understand the need to conserve species, especially as part of complex systems, there is little in here that is new or of surprise. Even for those readers the book is still worth reading as it reminds of us the importance of the task at hand. If you aren’t aware of the biodiversity crisis this is a must read and will be eye opening.

A hopeful vision for Earth.

long and slightly meandering, but important

even though the speaker is really slow (play it faster, it helps), the message of the book, the urgent importance to save Earth's biodiversity and therefore the resilience of it's biosphere while starting to feel the increasing impact of the (this time human-induced) sixth mass-extinction, is well worth to listen to.

Jonathan Hogan us a terrible reader. Edward Wilson mostly ignores climate change. There are much better books about the sixth extinction. Skip this one.

beautifully read, eye-opening account of the state of earth's biodiversity, but not all doom and gloom

must listen for conservationists and non

must listen for conservationists and non conservationalists alike. important. significant. mesmerising tale of human life and what we need to do to save ourselves.