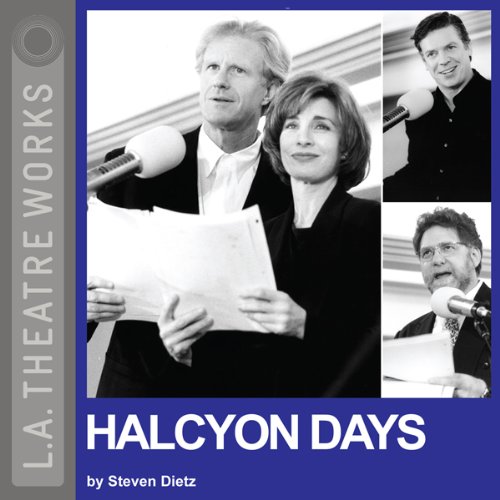 Halcyon Days, a play from one of America's top playwrights, Steven Dietz, captures the charged atmosphere of a politically controversial time: the U.S. invasion of Grenada. The central character, Senator Eddie Bowman, suffers from a dilemma: why invade a tiny Caribbean island to rescue some medical students? But clashes with a foreign policy specialist and a beguiling speechwriter serve to complicate matters. This recording from L.A. Theatre Works brings out a dynamic, energetic performance from an all-star cast of Hollywood greats including Ed Begley, Jr., Anne Archer, and Richard Masur that's sure to captivate listeners who are fans of live theater.

Senator Eddie Bowman cannot see the point of invading a miniscule Caribbean island to rescue a bunch of overly tanned medical students. But as the 1983 invasion of Grenada gets underway, the Senator finds himself at odds with a mysterious foreign-policy specialist who cultivates roses, the President's sexy new speechwriter-and his own son.

What listeners say about Halcyon Days