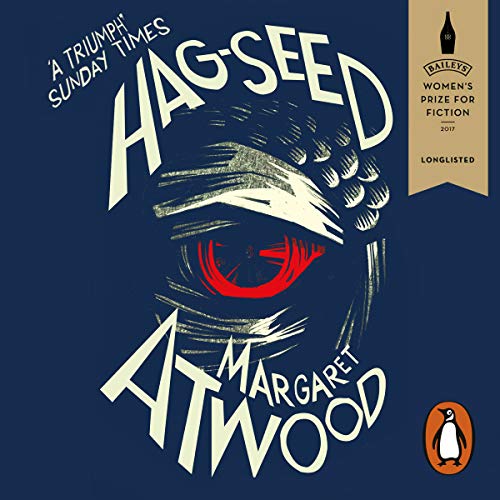 It's got a thunderstorm in it. And revenge. Definitely revenge.

Felix is at the top of his game as artistic director of the Makeshiweg Theatre Festival. His productions have amazed and confounded. Now he's staging a Tempest like no other: not only will it boost his reputation, it will heal emotional wounds. Or that was the plan.

Instead, after an act of unforeseen treachery, Felix is living in exile in a backwoods hovel, haunted by memories of his beloved lost daughter, Miranda. And brewing revenge.

After 12 years revenge finally arrives in the shape of a theatre course at a nearby prison. Here Felix and his inmate actors will put on his Tempest and snare the traitors who destroyed him. It's magic! But will it remake Felix as his enemies fall?

Margaret Atwood's novel take on Shakespeare's play of enchantment, revenge and second chances leads us on an interactive, illusion-ridden journey filled with new surprises and wonders of its own.

Only read Hag-Seed as it was required for the English class I am in. However, to my surprise I thoroughly enjoyed this novel and would recommend.

Atwood is brilliant as usual

A wonderfully quirky take on this Shakespeare's tempest. Delivered by an excellent Narrator. Highly recommended

Loved it...every bit , no complaints, will look for more Atwoods and Shakespeare rewrites..highly recommend this one. So clever.

I loved this book.
I laughed - and I cried. In this book Margaret Atwood has painted a canvas that vividly depicts the raw human emotions of the agony of loss and the complexity of love. This is a great version of the Tempest.

You don’t need to be familiar with Shakespeare’s The Tempest to enjoy this book as it is an imaginative story that’s also full of humour, but, if you do, you’ll recognise that there are parallel stories and references to the original scattered through the text. The last chapter (No 51) of the recording is a helpful synopsis of the Shakespeare’s play and I recommend listening to that to even if you know the play. I’ve seen the The Tempest many times but have never studied it in detail and was surprised by the references and similarities that I had missed between the original and the facsimiles layered into the book.

The narrative is a clever construction comprising a play, within a play within a book. The book’s main character is Felix, a theatre director, who is ousted from his prestigious job by a devious rival. Not only is he depressed by his loss of status but is also haunted by the memory of his dead daughter (Miranda) whom he believes still inhabits his house as a spirit.

Felix goes underground and takes a lowly job as an artistic director in a prison. Previous productions within the prison have been geared to the supposed cultural tastes of prisoners, but Felix is determined to bring Shakespeare into the men’s lives. He starts with the easier plays for the men to appreciate: Macbeth and Julius Caesar, but he has had an ambition to stage The Tempest and persuades his charges into a production.

To cover his tracks and hide his previous more illustrious career, Felix has changed his name to Mr Duke (Prosepero was Duke of Milan). Felix’s nemesis, who took his place at his erstwhile theatre. was Tony Price (Tony= Antonio who ousted Prospero from his dukedom). You get the picture: the characters in the book’s story have similar names to the characters in The Tempest.

The inmates enter into the production with gusto and are given much latitude to create some of their own lines and there are many examples of highly engaging and imaginative rap that I think Shakepeare would have enjoyed. There’s a lot of remarkably scholarly discussion among the inmates and Felix that I found illuminating and will certainly make me more aware of the play’s many facets when I see the National Theatre’s production of The Tempest beamed to cinemas by satellite in January 2017.

There’s another layer to this book that shows Margaret Atwood’s mischievious side as the story becomes a rollicking revenge drama.

A great listen narrated with gusto.

Clever dark humour makes for a great read.Loved it

This is a high-class re-telling of Shakespeare's 'The Tempest.' It is full of clever ideas and twists and if you like Margaret Atwood's style of writing you will very likely love this. It is classic Atwood, full of witty dialogue, amazing imagination,clever and daring plotting and memorable characters. I listened to this story over two days, in awe of a master storyteller. Loved every minute of it.
You don't need to be familiar with the Shakespeare play to enjoy this tale and there is some explanation of the Bard's characters at the end of the book.

Genius of Atwood for reinventing Shakespeare

As a fan of Margaret Atwood I was looking forward to this book but it exceeded my expectations.

Having performed The Tempest as a child, it was an incredibly innovative approach to tell a completely modern story but using an old Shakespearean plot, while describing the play itself. Not only did it highlight Atwood's ingenuity, it also showed how relevant Shakespeare continues to be. The revenge itself was brilliant and extremely fulfilling - as well completely unexpected.

Be prepared for long expanations into The Tempest - it might be boring for those who aren't a fan. It definitely felt like studying it all over again but with a fresh perspective. The reader did a great job in performing such a complex storyline.

The beat Margaret Atwood book so far. Poignant and feel good and funny, had me grinning all the way through. Highly recommend.

Overall an imaginative re-telling by Atwood and a fantastic, colorful reading by Thomson. A must read for any Atwood fan.

Just incredibly good! You must listen to this, enjoy it for every silky and intelligent word!

a triumph of a book!

Hard to think when I have enjoyed a book more. Great characters.
Beautifully read too.

I am studying the tempest at school and found this adaptation a really engaging way to get to grips with the original plot! The dramatisation is particularly engaging and impressive!!

Great Narrator. An excellent book for listening. You will learn a lot about the Tempest and find lots of new things if you think you know the play already.