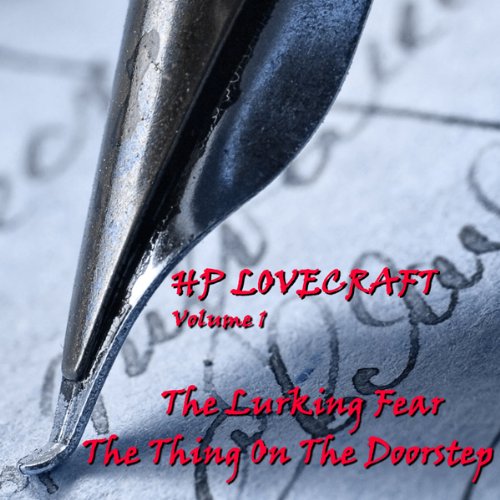 H. P. Lovecraft, Volume 1: 'The Lurking Fear' and 'The Thing on the Doorstep'

Howard Phillips Lovecraft is among the greatest American writers of fantasy and the supernatural. Born in 1890, a native of Providence, Rhode Island, his health was uncertain from childhood and he led a sheltered early life. His semi-invalidism enabled him to read omnivorously, and as a shy imaginative child he began to invent what would in his adult life become a whole macabre fantastic world of his own, peopled by creatures out of his own weird imagination.

As an adult he was retiring, almost a recluse. Tall, thin and pale, but with bright alert eyes, he was much given to wandering his native city in the dark hours of the night, and he became a devoted student of its antiquities. He began to write early, but had nothing published nationally until he was in his twenties. He set many of his stories around the imaginary town of Arkham, and invented an entire mythology of his own, its core being the demoniac cult of Cthulhu, based on the lore or legend that the world was at one time inhabited by another race who, in practising black magic, lost their foothold or were expelled, yet live outside, ever ready to take possession of this earth again. Since his early death in 1937 his stories have increasingly grown in popularity. He encouraged younger writers, and a number of authors have continued to develop in their own stories the cult of Cthulhu.

In this volume our tales are "The Lurking Fear" and "The Thing on the Doorstep". They are read for you by Garrick Hagon who began his acting career as a boy, playing the part of the Prince of Wales to Alec Guiness’s Richard III at the Stratford Shakespeare Festival in Ontario. He Has done much radio drama, and his long list of television appearances include Colditz and Dr Who. Among his many films are Star Wars, Cry Freedom, A Bridge Too Far, and Batman.

What listeners say about H. P. Lovecraft, Volume 1: 'The Lurking Fear' and 'The Thing on the Doorstep'

The best performance of Lovecraft I've yet heard

Most of the other readings of Lovecraft I have are by Wayne June, who is a truly excellent narrator of Lovecraft... but here David Healy is quite possibly perfection. Healy captures all the nuances of fear, bewilderment, and intensity but in a less dry fashion as compared to Wayne June, yet he doesn't overdo it either.

If you are new Lovecraft, and especially if you haven't heard audio versions by anybody else, Healy's reading is going to spoil you, but this is the best introductory reading of Lovecraft's work I would ever recommend.

These two particular stories are a great contrast of Lovecraft's work, with the The Lurking Fear being one of his earlier stories and The Thing on the Doorstep being one of his last. Both are two of my favorite pieces and complement each other nicely. The Lurking Fear captures all of Lovecraft's unique abilities to build resonating mood of the strange and hidden histories that his characters always seem to stumble onto, with a very vivid and satisfying ending.

But.. it's The Thing on the Doorstep that is the outright spectral masterpiece of classic terror between these two. For new readers out there, don't ever let Lovecraft's more quaint titles fool you into thinking the title will somehow reflect the quality of the content. Many of his best stories seemingly have these more generic titles, which might have been an influence from the editors of the pulp magazines he wrote for originally(?). Regardless, The Thing on the Doorstep is one of Lovecraft's most succinct and genuinely spooky stories. I should also mention that it is indirectly tied to his Cthulhu mythos, specifically that of The Shadow Over Innsmouth. The ending just floored me when I first read this, and narrator David Healy expresses all the darkest depths of the imagination that this story demands.

I decided to purchase these relatively inexpensive audio books by H.P. Lovecraft because I heard the books were well done horror with some classic creatures. That part at least was fulfilled. "The Lurking Fear" felt less captivating than "The Thing on the Doorstep" even though one can easily see where the story will end with the latter story.

My real gripe is with the audio. Not necessarily the narrator, he did alright, I might even say he did well. The problem was that I heard an echo in the background of the audio. The narrator would speak and then a few seconds later you hear exactly what he just said in the background. It honestly got really annoying and a bit distracting at times. Now, it may be possible that it was just my file or perhaps my headphones, however I had started this book about 5 minutes after finishing another book that didn't have this problem. So, consider yourselves warned.

TL;DR: Classic horror with decent narration nearly ruined by some kind of echoing in the background. (For me at least.)

The Lurking Thing in the audio book!

Would you listen to H. P. Lovecraft, Volume 1: 'The Lurking Fear' and 'The Thing on the Doorstep' again? Why?

Of course! It's excellent!

What does David Healy bring to the story that you wouldn’t experience if you just read the book?

Healy is an excellent reader. One of the very best. He brings an elevated high brow feel to this 30's pulp magazine chilling fare.

I won't be re-dipping my toes in the H.P. Lovecraft pond. I don't find his vague style of horror all that interesting nor frightening. Lovecraft seems to avert descriptive writing by saying things like, "a face so horrific I can't describe it," or, "a feeling so chilling I can't explain." Try. You're an author. Or were an author, as it is.

Also, the audio on this book is bad. There is a strange echo, almost as if someone's monitor headphones were turned too loud in the recording booth. Around 1:54:00 there's even a click track that becomes accidentally audible for a few seconds. Just amateur technical production. Distracting.