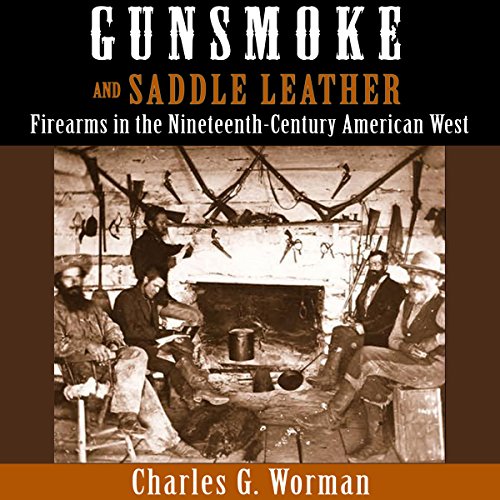 The gun, like the axe and the plow, was an essential tool in the exploration and settlement of the trans-Mississippi West. It provided food for the cooking pot as well as protection against two- or four-legged marauders.

Of course the employment of the gun, whether for good or evil, depended upon the user. The men and women who lived the 19th-century western experience sometimes described in detail the role firearms played in their lives. Such accounts included a trapper in the 1830s, a woman crossing the plains by wagon in the 1850s, a drover ("cowboy" in modern terminology) enduring the dangers of a long cattle drive, a professional hunter engaged in the slaughter of the once seemingly endless herds of bison, or a soldier campaigning against American Indians.

Each account adds to our knowledge of firearms and our awareness of the struggle faced by those who were a part of the western experience. Gunsmoke and Saddle Leather describes the gun's impact on the lives of those in the West - men and women, whites and American Indians - using their own words to tell that story wherever possible.

"This is not a book to be taken lightly, but one that will literally provide hours of reading pleasure...It is representative of extensive detailed research, great writing and all that a fine book should be. ( The Gun Report)
"Anyone who wants to know the role of the gun in the nineteenth-century West can do no better than this massive and important reference work." ( New Mexico Historical Review)
"If you have an interest in antique firearms of the nineteenth century American West, and enjoy first-hand accounts by the very people who used them, then you are in for a real treat with this huge book....a good, enjoyable and entertaining read for just about anyone." ( The Texas Gun Collector)

Just as it was! Wonderful stories and accounts of actual events as to how it was back then, when guns were a part of ones possessions like a cell phone is today.

I at first listening became impatient with the back to back historic quote, and recorded historical written record. I expected to be drawn in by individual human intimate stories. The humans in this listening are only the victims of their own desires. This is a fantastic overview of history about firearms in 19th century USA.