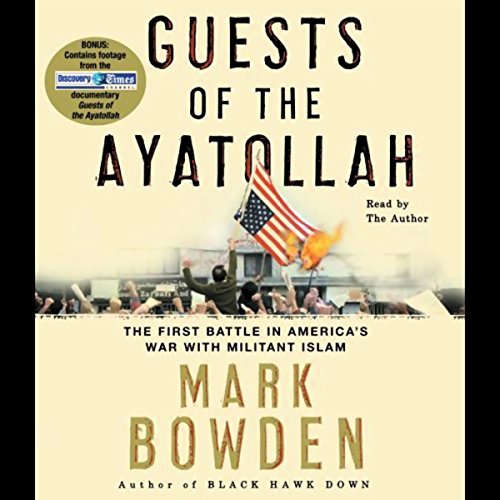 Guests of the Ayatollah

On November 4, 1979, a group of radical Islamist students, inspired by revolutionary Iranian leader Ayatollah Khomeini, stormed the U.S. embassy in Tehran. They took 52 Americans hostage and kept nearly all of them captive 444 days.

The Iran hostage crisis was a watershed moment in American history. It was America's first showdown with Islamic fundamentalism, a confrontation at the forefront of American policy to this day. It was also a powerful dramatic story that captivated the American people, launched yellow-ribbon campaigns, made celebrities of the hostage's families, and crippled the reelection campaign of President Jimmy Carter.

Mark Bowden tells this sweeping story through the eyes of the hostages, their radical, naive captors, the soldiers sent on the impossible mission to free them, and the diplomats working to end the crisis. Taking listeners from the Oval Office to the hostages' cells, Guests of the Ayatollah is a remarkably detailed, brilliantly re-created, and suspenseful account of a crisis that gripped and ultimately changed the world.

What listeners say about Guests of the Ayatollah

Worth a listen, with a few reservations

Overall, this was a fascinating listen. The author narrated his own book, and did a good job. The story line is easy to follow and well written.

My reservations about this book are as follows: Bowden is a strong fan of Jimmy Carter and that comes through often throughout the book. If you are also a Carter fan, you will enjoy that. His descriptions of Carter and his handling of thie hostage situation are far and away more favorable than I've seen anywhere else, other than in Carter's own writings. These probably served as an important source in the writing of Bowden's book.

The final chapter, which summarizes and editorializes, was the weak link. It consisted in a fair amount of great praise for Carter and absolute disdain for Reagan. When Bowden mentioned Reagan, you could even hear a disgusted change in his voice. He also got in a jab at George W. Bush, by stating that he had kept the former hostages from suing Iran for damages. I'm not a big Bush fan, but am rather tired of EVERYTHING being "his fault". The former hostages have, since their captivity, lived through the administrations of Reagan, George H.W. Bush, and Bill Clinton before reaching the "W" years. There was no mention of their legal pursuits during any of these administrations. That made the "W" jab seem like a pure piece of vindictive political correctness, and was annoying. Enough is enough on that score.

Overall, the book was a good listen, but I would not rely on it as a single source for political background of the day. "Siege of Mecca" is an excellent book from Audible which is about the takeover of Mecca's Grand Mosque by Muslim extremists in the late 70's. It is written by Yaroslav Trofimov, who deals briefly with the Carter administration and its handling of foreign policy, including the Iran hostage situation. I heartily recommend it as a companion to this book, or as a stand-alone work. It is excellent in every respect.

This book is fascinating- about an episode that would be a minor historical event except that our troubles with Iran are still on-going (and Iran keeps taking hostages). The author reads the book himself and at times the story reads like a thrilling spy novel in an exotic place (even though many readers will know generally what happened)... But be forewarned, any story about the mistreatment of a group of hostages for more than a year can be sad and depressing. I enjoyed the many insights into each of the hostages' personalities and their unique ways of coping with their captivity, but there were mornings when after listening for an hour during my commute that I was left sad and angry. It takes a good book to affect me this way, and this is a good book about a history we all should know as we veer towards yet another confrontation with the mullahs of Iran

Fine as an abridged version!

I recently went on an Iran kick, listening to "All the Shah's Men" (from Audible) and then this book. 'Guests of the Ayatollah' was the far more engaging of the two. I usually shun abridged versions, but I must say that at 9+ hours, this edition was just as engaging and satisfying as many of the great full-length books I have listened to.

The author paints a well-researched view of the whole Iran Hostage Crisis, skillfully blending the parallel stories of the Iranian revolution, the American hostages, President Carter, and the (fascinating!) botched rescue attempt by Delta Force.

This was one of those real-life books that has you engaged as if it were fiction. Highly recommended, especially if you were like me, having always heard of the Iran Hostage Crisis but never knowing the actual details.

I'm a fan of Bowden and liked Black Hawk Down. He bring a reporters eye for detail to this subject and offers a minute by minute account of the crisis. There's not much new here but it is an exciting listen and doesn't pull any punches.

A timely book to read in light of current Islamic extremism and the aftermath of the Benghazi debacle. The book offers a blow-by-blow account of the 1979 takeover of the American embassy in Tehran by leftist and pro-Kohmeini students and resulting capture of 66 American hostages who remained under guard for 444 days.

Bowden clarifies President Carter's successes and failures in relation to the hostage crises as well as debunks the GOP falsehood that President Reagan resolved the hostage situation. Carter, despite his bumbling foreign policy diplomacy, should be credited with finally resolving the crisis at the 11th hour (Inauguration Day 1980).

The reader will be surprised to learn that prior to the November 1979 embassy takeover, radical students unsuccessfully attempted a takeover the previous February. The handwriting was on the wall, similar to Benghazi, but our state department failed to act.

A must read for a deeper understanding of the origins of the current Islamic Revolution against Western powers and values.

I was only 13 when the Embassy was taken over, and I well remember the images of our diplomats being praded in front of the cameras. While I am sure there is alot more of the story out there, I learned alot about the takeover and the runup to it from this book.

I was very pleased with this book. I was too young to remember the headlines when this happened but had always wanted to learn more, and Bowden's thorough account is very well done. There's so much to this story. It conveys the fear of the hostages, the inexperience of most of the hostage takers, the desperation of the American government to resolve it, and the amusing antics of the hostages as time wore on. I highly recommend this for anyone interested in a thorough account of the Iran hostage crisis.

Boden is a talent to be recognized...(check out Killing Pablo) This story spins like an historic rodent on an exercise wheel at a Halloween Party---- a little bit squeaky with more rhythmic breathing than would be allowed in a PG13 feature. That is to say a little long winded and redundant with a few to many characters---- but it does continually develop-- and if you can appreciate that it is not fiction, but a story of modern history, the tale of real life experiences: it is worth the time it takes to tell it.

I enjoyed the story. Mark did a great job researching and narrating the story. Never a dull moment, the book just moves through the chapters. I gave it 5 stars because he made the story intriguing and somewhat suspenseful. Definitely worth putting on your wish list.

Learned (and remembered) a lot

I was just graduated from college in November 1979 and recall the daily count of “days of captivity” on the nightly news. Didn’t understand, nor care about, the back story on the Shah...only that our country had been humiliated. Reading this book 40 years later provides a well-rounded and thoughtful perspective on the ordeal. And listening to the author read his own story was a plus.