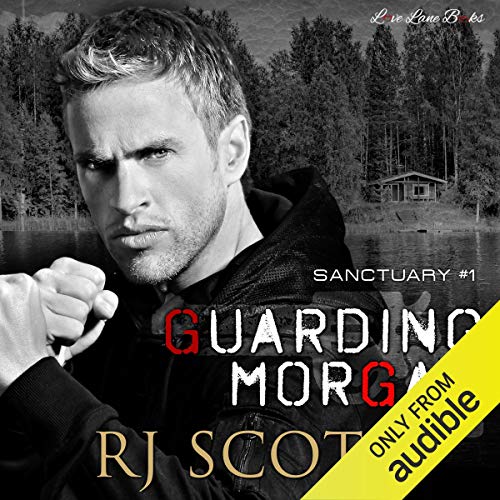 Morgan Drake is the only witness to a murder in an alleyway. Nik Valentinov works for Sanctuary, a foundation offering witness protection to anyone whose safety is compromised. Morgan discovers a bodyguard's arms can offer more than protection.

Morgan is the only person who can give evidence for prosecuting the cop responsible for the crime. When the FBI safe house where he's being held is compromised, he follows the instructions of the agent in charge and runs.

Nik Valentinov works for Sanctuary, a foundation that offers witness protection when FBI security is questionable.

When Morgan's handler sends him to Nik for safety, neither Morgan nor Nik could imagine that two weeks alone in a cabin in the woods would have their hearts racing with something much more than merely trying to keep Morgan alive.

What listeners say about Guarding Morgan

Sanctuary employee, Nik Valentinov, provides bodyguard services and is tasked with keeping prosecution witness, Morgan Drake, safe. Feelings develop when they stay in a remote safe house. I’ve loved everything I’ve listened to by RJ Scott but I’ve realised they’ve all been more recently published novels until now. This is a far more straightforward instalove story than the wonderful Lancaster Falls or Harrisburg Railers series and that’s as it should be - authors evolve and mature over time. I’ve come across the setup in Guarding Morgan a few times so there were no surprises and I found things a little forced and way too cutsie. There’s a repeated phrase, “... like a girl”, that’s used disparagingly each time. I hope it wouldn’t be included these days. I’ll try the next book in the series because I notice it was only published a couple of years ago. Sean Crisden provides his always excellent audio narration.

Yes I would. It was well written and equally well told.

What does Sean Crisden bring to the story that you wouldn’t experience if you just read the book?

If you could rename Guarding Morgan, what would you call it?

I don't understand this question, what's wrong with the title?

After Morgan Drake witness' a woman being shot in an alley, his life is forever changed. In witness protection his location is compromised, as well as his safety, so his handler contacts a friend he served in the military with to take over guarding Morgan. Shot, confused, scared and suffering from nightmares due to what he saw, Morgan doesn't transition to the new arrangement smoothly.

Nik Valentinov thinks there is more to the story than what Morgan is telling him at the start. It doesn't take long for Nik to realize Morgan is being completely honest, and the young man is terrified that the shooter or the person that issued the kill order will find him and do the same to Morgan. It is the root cause of the nightmares. Being confined to the safe house in close quarters, it doesn't take long for a mutual attraction to form. Nik valiantly attempts to ignore his attraction to Morgan, that is until Morgan takes the lead and makes the first move.

This was a fast paced, action packed read. The flow of the story moved evenly and the characters fit well from the start. Morgan was timid, shy and scared until Nik refused his advances. Then Morgan became the aggressor. Nik is convinced that he can't protect Morgan and sleep with him at the same time, very Kevin Costner in the Bodyguard. But he can't deny the attraction and the pull, the two of them seem to gravitate to each other regardless.

Narrated by Sean Crisden and I absolutely loved the voices he gave the characters. Morgan goes from scared and uncertain to someone that is confident and determined by the end. Nik is the strength, the one always in control, until Morgan gets under his skin. Crisden really conveyed all these emotions with tone and inflection, even capturing the vulnerability in Nik there at the end.

Definitely a must listen, anything by Sean Crisden is going to be good. But then you have his voice bringing the words RJ Scott painstakingly put on paper and the result is simply flawless. If you like bodyguard type stories, books with mystery, suspense and intrigue, then you'll love this one.

Nice first book in the series

This is the first book of a series involving alpha men who are members of Sanctuary, a privately funded "marshal" type organization. It seems that there are an unusually large number of gay men in this organization. I've read a number of these books and have enjoyed them all. They have a large protector vibe from tough alpha men, and who doesn't love that. They are fairly predictable, but the writing is good enough that it is not stale. This is the story of a young man, Morgan, who witnessed a murder. He was in FBI protection, but there was an FBI leak and he ended up with Nick, a Sanctuary agent. So we have a beautiful young man, a hunky ex law man, two weeks in a cabin in the woods. Instalove happens and off we go. The story is well written, told from both MCs POV and continues in the next book with another couple. Overall, a nice listen, but not a much depth.

I'm not sure why other people liked it so much. this novel felt like the main character was a woman in a man's body. In particular the mental dialog just seemed, off, the main two characters are constantly thinking things like 'not wanting to scream/run/act like a girl.' At just over 3 hours there really isn't much time for character development, and the story overall felt weak. I didn't feel their romance or love was legit, and I felt Morgan was weak and tiring.

I really liked this book when I read it, so when I saw the audio was available as well I decided to give it a chance. Sean Crisden is such a well rounded narrator. I love listening to his voice and he always does a great job making sure the characters are brought to life and have the correct amount of emotion for each book he narrates.
Morgan was in the wrong place a the wrong time and saw something that he shouldn't have. he was placed into protective custody that was then compromised. Nick works for the Agency called Sanctuary, its what people use when the government is not able to help protect them any longer. After being stuck at a cabin in hiding for weeks, Morgan and Nick become closer and start gaining feelings for each other. This book is a Great start to this series. I look forward to listening to the rest of them.

it is worth it

I think it was a good start for the series, a good mix of suspense and sexy. Loved Nik, not so keen on Morgan though. He gave me a whiplash with the mood swings, but then again it could be that he was suffering from PTSD after witnessing the murder and was fearing for his life. Overall I enjoyed this short story and I will be listening to the rest of the series.

My first time listening to Mr. Crisden and I love his voices, especially the one he gave Nik *le sigh*. I am looking forward to listening to more.

I loved the story. My favorite part is that the author took two unlikely people and merged them into a romance that was sexy cote and funny. I loved the banter they had. A couple times I got lost and had to re read. Seemed like a couple of links did not connect for me that is the only reason I did not give 4 stars. The narrator was awesome!

Narration kicks a pretty good story up a notch!

As usual, Sean Crisden's narration for this fast-paced, action-oriented m/m romance really contributed to my enjoyment of this book. I like that the series is available on both Kindle Unlimited and the Romance Package so that I can get Whispersync.

There's shades of the Cut and Run series (especially since Crisden narrated those) and Sloane Kennedy's Protectors Series). The romance between Nik and Morgan was rather rushed, but the story was long enough to carry it and the plot out. There are underlying plot threads that will continue to run through future books. While I liked the story enough to be interested in listening/reading more, I'm not tearing through the series as I've been driven to do with others (like the Protectors).

I enjoyed this story, it wasn't too long, included some sweet relationship situations and a couple of dangerous situations.

Nicely done bodyguard romance, and I can see why everyone enjoys this one. The characters are well developed and *bonus* RJ Scott's super hot love scenes.

I adore Sean Crisden and he does a great job with this one. His Morgan is truly adorable, and the way he pulls Nik out of his shell was the best part of the story.