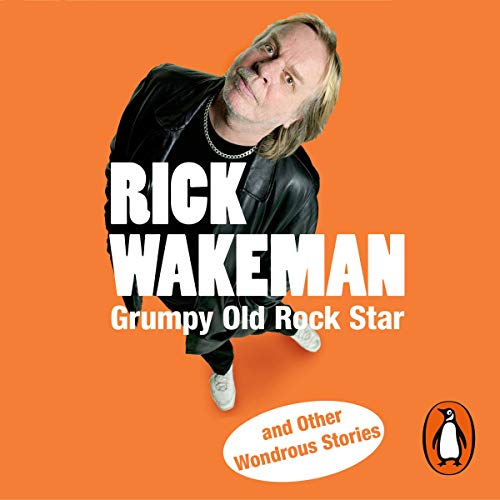 Around about September of 1948, Mr and Mrs Cyril Wakeman had an early night. And some time later, at Perivale in Middlesex, Mrs Wakeman produced a bonny baby son. They named him Richard, but he quickly became known as Rick.

Rick was a likable little fellow who had a talent for the piano (and for making trouble), and music became his life. Later, he joined a popular music group called Yes and became a legend.

Much later, he became a Grumpy Old Man who appears on Countdown, hosts a hugely popular radio show on Planet Rock and performs a one-man show telling stories about his rather extraordinary life.

That's where this book you comes in. Mr Wakeman is simply one of the great storytellers of our age - let's face it, he has some fabulous material. It seemed a shame that some of the funniest yarns should not be more widely known. So he accepted some cash and here we are.

Curl up by the fire with a Grumpy Old Rockstar and your nearest and dearest. We defy you not to listen and laugh.

What listeners say about Grumpy Old Rockstar and Other Wonderous Stories

Rick’s Stories and the way he explains them brings everything you want from a rock biography. Very enjoyable listen which is highly recommended.

Rick Wakeman is the best (I never give 5 stars)

Very funny very moving. If you are not a fan of Rick Wakeman when you start the book you will be by the end.

An hilarious riot from start to finish

Rick Wakeman has certainly not led a dull life and has many interesting stories to tell. This book will have you laughing repeatedly and is well worth a listen and a re-listen.

As Rick Wakeman narrates the book you get to see his eagerness for life, even as he recounts circumstances that could have brought an end to it for him.

You don't have to be a fan to enjoy the book but every fan will find it a purchase they wouldn't be without.

Would you consider the audio edition of Grumpy Old Rockstar and Other Wonderous Stories to be better than the print version?

Absolutely! Why would anyone NOT want to hear Rick's own voice reading the book rather than hearing some silly professional narrator or random VIH (Voice in Head) stumble through such a flavorful text?

What does Rick Wakeman bring to the story that you wouldn’t experience if you just read the book?

Didn't you read my answer to your first question?!

Not really "laugh"-- more like "chortle." An occasional "guffaw."

Ok, maybe more than once I ended up like Uncle Albert (from Mary Poppins... not the Paul McCartney one), splitting a gut and gasping for breath. Not for the timid, this book

As the "Corner Office Curmudgeon," if not a "Grumpy Old Entrepreneur," I'm at least known as a "snarky Uncle Horace" to many a tech start-up founder and the VC community. And yet I found virtually NOTHING to complain about!

Well, get off if my lawn anyway!

I'm a proud, if a bit gruff child of the 70's and prog rockaholic myself, Rick Wakeman has always been an enigma who in his later years has been reborn as a radio/TV etc. celebrity and has ended up yes (no pun intended) reminding me of snarky Uncle Horace indeed.

Settle in for a spider web of interconnected quirky stories delivered by a grand storyteller and legendary contrarian non-conformist who always seemed to be at the center of near mythical calamities and bizarre going-on associated with the excess of the time and place. I imagine many, many a late night pub outing (non-alcoholic, of course) could be filled with his banter. Should be good for three or four more books, at least.

Can't wait for the audio version-- nothing else will do-- of the author reading the sequel. Until then I guess I'll just have to be satisfied to follow the Premier League and catch another ARW gig.

But if that fat ol' geezer chick with the faded Strawbs T-shirt that was "sitting" in front of me at the last show is there again and spends the night on her feet dancing (more like shuffling) and blocking my view of the "stout" fellow wearing a cape playing keyboards, I'll have to thump her boney head and tell her to squeeze back into her seat. Same with her reed-thin middle-aged companion (who despite all logic, reason and conceivable imagination appeared to be her daughter with a permed, slightly less gray hairstyle) wearing a Union tour tee tied into a halter top.

Sheesh. No respect for elderly, let alone the music. Kids these days..

Great read/listen, grew up in the 70s when the music business was a powerful industry. Rick Wakeman is not only a super talented musician but equally talented story teller. Highly Recommended!

The adventures of Rick Wakeman will take you to a time and place when Rock Stars were just starting to come into their own. For a hilariously good time with a Brilliant narrator who really lived the life read “Grumpy Old Rockstar and Other Wonderous Stories”

This will be one of the ones I listen to again and again; great voice, rhythm, and pace.

Such a fun listen

Rick weaves a story like few other musicians. He talks to the reader/ listener not at the reader/ listener. He also has a vocal delivery that just makes me smile. It's like sitting in a pub listening to a dear friend tell stories... which, I guess what this book really is.

Great for long trip with lots of LOL moments. Even had husband asking to put the book back on

Great stories (that have nothing to do with music)

It is a pleasant listen if you do not expect the book to be an actual autobiography. Rick Wakeman is outrageously funny about himself being outrageous, has no mercy for anyone starting with himself, and the book is a long, amusing, but rather random a collection of stories. The reflections on the music and musical career are scarce and so short that they are usually finished before you ended musing "oh, he is finally talking about music!". Apparently, it was not supposed to be an autobiography at all. So, if you consider buying the book to get insights into the music - drop the idea. Buy it for the stories, though! I would say, it is a nice read even if you are not a fan.

Really an enjoyable romp thru such a fantastic career Read by Rick himself makes this a fantastic treat!

Rick Wakeman delivers a collection of anecdotes from his amazing 50 year career that at times had me wiping tears from eyes but those were tears of laughter because these are some of the best unfiltered rock stories I've ever heard! Wakeman has no axe to grind here and his tales are full of folly,fondness and admiration for the many of the colorful characters he has encountered and how he has seen the world change from his days playing gigs behind the iron curtain to 100,000 seat arenas with Spinal Tap inspired stage sets. "Rocky Wigwam" as one promoter called him is a complete 180 from how I had perceived him (snooty art rocker) but in turn is quite the affable english rascal one would expect to find at the neighborhood pub captivating the crowd with his hilarious tales, which after a year of Audible listens about serial killers, post apocalyptic worlds, monsters, killer robots, endless tragedies and scientific wonders were a breath of fresh air... unless of course you were in YESes dressing room...(get the book)

Love this, such a great telling of his experience.

Such a great telling of his experiences. The production quality made it easy for me to hear.

Slow car trips to hear more of this

A great and funny listen, mostly in fairly short chapters that are ideal when driving to work. I find myself driving slower in order to listen a little longer.
Rick narrates his life that could have gone so wrong like many other talents have but so far has come out on top. Long may it continue.
I am not a fan of his music but this book makes him a favourite author, let's hope for more.

One of hte best books ive downloaded, made me crack a few belly laughs as well as some seriously interesting stoaries about ricks life !

Rick Wakeman is good value! You're always in for a great time when he shows up on radio and TV. This was one of the most enjoyable author-read audiobooks I've heard in a long while. Sequel, please!

Even if you don’t like Yes, you must listen to this book. Very very entertaining and enjoyable. Once you start listening you can’t stop , absolutely brilliant.

Not gumpy, but still a rock star

Not so much a detailed autobiography, more of a series of laugh out loud anecdotes and tales from keyboard virtuoso Wakeman's life and career. Some of these are remarkable, some are terrible, and some are simply bizarre. Rick comes across as being affable and personable, as opposed to grumpy. I listened to the audio book which Rick narrates himself. It's like he's sitting next to you in a pub, having a chat as he recounts: - getting hold of a KGB uniform, in the middle of the cold war - drinking a plane dry - gaining access to a nuclear submarine - feeding meat to his vegetarian Yes band mates - having a heart attack at 25 – twice - staging King Arthur (on ice) - playing in a circus with Salvador Dali - watching Keith Moon trash a restaurant - giving up drink after being told he had 6 months to live - hanging out with Ronnie Biggs and Fidel Castro. What a life he has had. Always self-deprecating but amusing. This was a tremendous way to while away a few hours cheering myself up as try to get though this pandemic without going crazy.

It's not my authors that can make me laugh out loud but Mr Wakeman makes me do this with aplomb. A great book.

What a man and what a fantastic life and time Rick has had . I enjoyed every minute of this book, the ups and downs, when he tells a story it's like you are right by his side. Totally BRILLIANT. Cheers Rick.

A fantastic ride along with one of England's finest musicians. Loved every minute, the highs and lows are dealt with in equal measure and the result is a fascinating insight into the world of the travelling performer.

i couldn't put it down, listened while I was decorating made the job a pleasure.