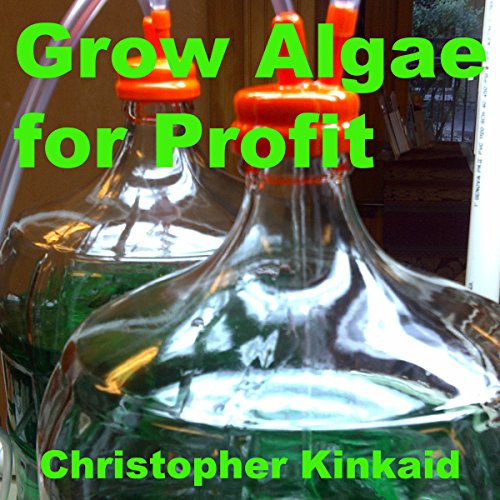 Algae is a miracle of nature. Rich in amino acids, proteins, lipids, carbohydrates, anti-oxidants, phycobiliproteins, and other valuable products, algae is being tapped as the new feedstock across industries.

This book describes how to build your own photobioreactor to grow pure algae species (taxa). Algae are Earth's "engine" to fuel the food web. As a "primary producer", responsible for nearly half the oxygen production on Earth, the power of algae is being commercialized to produce valuable organic products. Build your own algae photobioreactor (PBR) grow kit, to cultivate valuable algal strains, and tap into the rapidly growing algae industry. Grow algae reliability, and repeatably, with photobioreactor (PBR) algae grow kits for controlled photosynthesis. Grow up to four different algal taxa using these four-vessel algae grow kits rated at 80 liter total capacity. Complete with optical, mechanical, electrical, pneumatic, and biological systems, photobioreactors give you complete control.

Growing monocultures of algae, using photobioreactors, is useful for researchers, developers, companies, universities, and those who need to cultivate algal monocultures with purity, and minimal cost of construction. Algae produce valuable amino-acids, proteins, carbohydrates, and essential oils (lipids), consuming water-borne pollution for nutrients. Algae species, grown with your PBR algae grow kits, enable researchers to tap algae's enormous productivity, able to double in mass in 24 hours under exponential growth phase. Algal researchers work to develop protocols for increased production. Growing algae converts water, in-organic compounds (CO2), and solar radiation into valuable organic molecules. This audiobook is written as a resource for building your own photobioreactor and growing valuable algal strains. This book is written as a resource for researchers, to construct an effective bioreactor, rated at 80 liters, for growing algae mono.

What listeners say about Grow Algae for Profit

Grow your own Algae for fun and profit!

This audiobook I enjoyed very much. It was full of very interesting concise information. The book is well organized and easy to follow without all the fluff I normally get so fed up with. The author did seem to have a motive, of selling their own startup kits for growing algae, so at times it felt a little infomercially but for me it did not detract from the message of what it takes to grow your own biomass. They cover many different kinds of algae, nutrients, light schedules and wavelengths and essentially everything else you need to get started.

The short length and interesting dialogue, makes this audiobook easy to read multiple times, helpful for the dense information to fully sink in. If you are interested in growing your own algae then I strongly recommend this, regardless of of the subtle paid programming vibes.