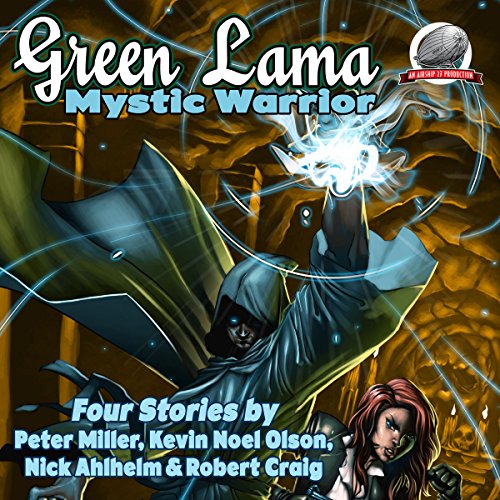 The mystic warrior Jethro Dumont was a jaded, rich American who hungered to find purpose in this world. His search for self-knowledge and fulfillment led him to a secluded Buddhist monastery high in the Tibetan Himalayas. There Dumont studied the mysteries of the Orient, at the same time learning to accept the nonviolent tenets of this ancient and venerated philosophy. By the time he returned to America, he was a changed man; one possessed with mental clarity and unique, mystic abilities beyond the understanding of normal men. Now, with the aid of his Buddhist companion Tsarong, he assumes the identity of a new, eerie crime-fighter, the Green Lama! For years the exploits of Green Lama have thrilled pulp fans both in his own magazine, in comics and on radio. Now he returns to pulp action in this collection featuring two previous issued classics by Peter Miller and Kevin Noel Olson and two brand new, never-before-published adventures by Nick Ahlhelm and Robert Craig. From confronting Nazis in his beloved Tibet to investigating bizarre murders in a Hollywood movie studio, Jethro Dumont's new career is one filled with plenty of action and adventure as the Mystic Warrior strikes again!

BAM! That is what this book is. It is a giant body slam of Lama fun. I have just finished Garcia's 3 Green Lama audiobooks, and was lucky enought to have been shown this gem. A collection of 4 short stories that pits the lama vs another mystic, amesia, a ghost, and some creepy hooded hairless people. You will need a sherpa to find your way home when you are done listening to these amazing tales. My only regret is that Adam Lance Garcia did not have a short story here; nonetheless, the writers we do have just nail everything about the Lama, and it is good to see so many new writers looking back at things that have gotten a little dusty, but have never been forgotten.

Jiraiya Addams, I must say just brings this book home. HE is the sherpa! His voice guides you through each tale so effortlessly that yo almost feel as if you were watching a movie, rather than listening to a book. He has swiftly become a favored narrator, and has proven to be a pure professional when it comes to the art of voicing a book.

This is one book I was sad to see end.