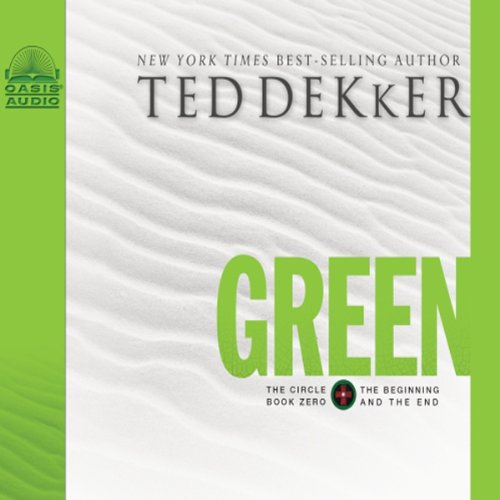 Four Novels. Two Worlds. One Story. As foretold by ancient prophets, an apocalypse destroyed Earth during the 21st century. But 2,000 years later, Elyon set upon the earth a new Adam. This time, however, He gave humanity an advantage. What was once unseen became seen. It was good and it was called...Green.

But the evil Teeleh bided his time in a Black Forest. Then, when least expected, a 24-year-old named Thomas Hunter fell asleep in our world and woke up in that future Black Forest. A gateway was opened for Teeleh to ravage the land. Devastated by the ruin, Thomas Hunter and his Circle swore to fight the dark scourge until their dying breath.

Now The Circle has lost all hope. Samuel, Thomas Hunter's cherished son, has turned his back on his father. He gathers the dark forces to wage a final war. Thomas is crushed and desperately seeks a way back to our reality to find the one elusive hope that could save them all.

Enter an apocalyptic story like none you have read or heard. A story with links to our own history so shocking that you will forget you are in another world at all. Welcome to GREEN. Book Zero.

What listeners say about Green

It may be first but listen to it last.

Very engaging story. I have listened to the whole series now and enjoyed them all.

Even though this is the first book, start with Black and move through to this one last.

Narrator was good but all voices were similar so hard to distinguish characters by voice alone. But the story had plenty of context & placement so it wasn't a problem. Great emotion in the narration though.

I love the ending

If you read the trilogy you will love this book and how it all ties into them. And you understand how it all comes together. Beautifully written, extremely fast paced and at the end you just say Ahhh! Read it.. Read the others first then read this one.

An entirely unnecessary addition to the series

I enjoyed Black, Red and White of the series and was closing out with Green. My question is, why? Why ruin a great series with a creepy addition featuring seemingly normal nice people suddenly deciding they were destined to be vampires, and a ton of lose ends that don’t get satisfactorily answered. If I had to do it over again I would’ve ended with White.

A weird way to complete the "Circle"

What aspect of Tim Gregory’s performance would you have changed?

not as good as Lamont's performance in the other 3 books.

as exciting as i was to have some questions answered, white was a much better ending. i would have rather had the questions leave open ended then some of the uninspired crap.

Another Great One for Dekker

Another great book for Dekker in the series. I really hated to hear that this is the end of a great series. I just couldn't stop listening to it, when I got to the last CD I sat in my car for over an hr just to listen to how it would end. This is a must listen for all Dekker fans.

This narrator was much better than the last. Plenty of different voices for the different characters. Well done.

A wrap-up that doesn't quite wrap things up

If you've read the trilogy you know it ends with a ton of questions left unanswered. Even so, that ending would have been more than satisfactory had
the author not seen fit to write this, book zero for the Circle trilogy.

As in the other books, we follow the same major characters but this time, spend much more time in the future.

A great listen/read great story of loss, love, war and faith but, the end makes me think there will be another installment.

Had Schwarzenegger but hired Mike Meyers instead?

My biggest disappointment in this book is that Bob Lamont was not narrating. Bob Lamont played the voices of the previous 3 books in the series to perfection. He was absolutely astounding! Like he was born for this role. Kind of like having Arnold Schwarzenegger play the lead in an action movie. Tim Gregory, on the other hand, is kind of like having Mike Meyers show up to be The Terminator in the latest movie instead of Arnold. Not Very Tall. Not very Beefy. It looks like he is afraid of the dark instead of scaring the dark. Overall very disappointing.

While Gregory is a great actor, I almost could not bear it after having such a good time with the first three. I do not think his interpretation of the characters is very good and makes me believe he never read the first three titles or did not understand the characters. I don't care how old our heroes get, they should never be made to sound like their aging voice is the same as struggling to squeeze out a number 2! Especially while shaking their fist at the sky! The characters are not even THAT old and yet he made them sound weak and frail. More like an old dying Moses than seasoned warriors in their prime of leadership. His portrayal of the main characters annoyed me enough to pause the book for a week at a time. The other three I read as often as aI could and could not put it down. To Gergory's credit, he would be a good hire for other books, just not this one. His voice simply is not deep enough. (I could say a lot more negative, but this is hopefully enough)

I still give the entire audio series a 5 STAR and this is a must-read, but have to mark this one down for hiring the wrong actor!

the circle series is hands down my favorite series. Ted Dekker is an amazing author. The narrating was good some of the music in between chapters was a little cheesy, but overall I would recommend.

i loved how it started and thenit went straight to the bible. i thought it was a fantasy nit religious reading material

Loved it so much now I want to read the lost books series, so excited!!!!

Do yourself a favor and read the entire circle series. This is the last in the series I didn't think I'd enjoy it as much as I did but it as good as all the others. Fast paced, lots of action while still managing to be thought provoking.

the original 3 were so much better...

this 4th book was difficult to read even more the second time around. I feel that it should maybe have ended differently. I think there's elements of it that could have been used in a completely alternative book but if you only red the first 3 there were many unanswered questions.