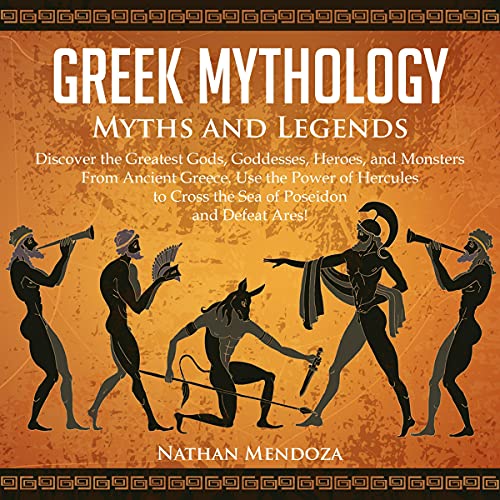 Get to know the Greek gods and goddesses, from the mighty Zeus to the temperamental Poseidon, the beautiful Aphrodite, and every character from A to Z.

Who wouldn't want to hear about Zeus and his command of lightning, Hades and how he found his bride, the wisdom of Athena, and so many other stories that capture the imagination.

These stories can do more than entertain; they can also inspire and teach us lessons the Greeks themselves penned.

Before science, there were myths. Today we see them as fiction, but in the past myths were a way to explain all the natural phenomena surrounding humankind.

This audiobook book will tell you all about ancient Greek mythology. Every myth present in the audiobook is supported by additional material regarding ancient Greeks' history and culture to help our listeners understand the time’s cultural background.

Starting with the creation myth, this audiobook will take you through the stories of the Titans, introduce the Olympians, bring in the demigods, and sneak a peek at the monsters that made up the mythology.

You'll learn who all the gods and goddesses were in relation to one another, mythological explanations for natural events, and why any of this still matters today.

Upon Mount Olympus, along the shores of the Mediterranean, and deep in the Underworld, gods, goddesses, demigods, and creatures linger in mind and stories of an ancient culture.

This culture gave us science, philosophy, and rich mythology that never stops enticing us.

To appreciate the power of their stories for yourself and become absorbed in a world so like and yet unlike our own, buy this audiobook and discover the fascinating world of Greek mythology today!

What listeners say about Greek Mythology