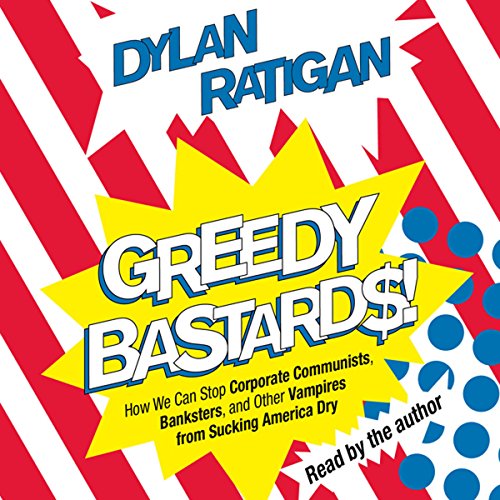 Dylan Ratigan is mad as hell. Infuriated by government corruption and corporate communism, incensed by banksters shaking down taxpayers, and despairing of an ailing health care system, an age-old dependency on foreign oil, and a failing educational system, Ratigan sees an America that has allowed itself to be swindled and robbed. In this book, his first, he rips the lid off our deeply crooked system—and offers a way out.

This country, now more than ever, needs passionate debate and smart policy, a brazen willingness to scrap what doesn’t work, and the entrepreneurial spirit to try what does. Ratigan has compiled brash and fresh solutions for building a new and better America, and with this book he has started the debate America deserves. With you, he wants to take back the country from the six vampires sucking this nation dry:

To combat these vampires and to isolate the systematic ways in which our once productive industries and our government have been breached, Ratigan does not offer a grab bag of flimsy suggestions or useless hot air. Instead he provides listeners with a set of values that together form the answer for how each of us can not only understand what has gone wrong—but join together to make it right.

What listeners say about Greedy Bastards

Would you consider the audio edition of Greedy Bastards to be better than the print version?

Yes! I love being able to hear the actual author of the book narrate it! It makes it so much easier because I just don't have as much time to actually read the book in the time frame I want. In some ways it is easier to grasp and retain to memory than actually reading the book. If you are one who learns by listening then I highly recommend the audio version of this book!

The eye opening statements and explanations of how bankers have rigged and cheated the system at the taxpayers expense! It is wonderfully explained in lay mans terms so that anyone can grasp what happened during the financial collapse of 2008. It also offers solutions to the ongoing problem that has yet to be halted by the banks and wall street.

What does Dylan Ratigan bring to the story that you wouldn’t experience if you just read the book?

His narrative is engaging and he brings as much passion in his narration as he does when you see him on TV explaining things and or talking with a guest on his show!

It made me angry that we still have yet to arrest, indict and convict the Gangsters of the banks who cheated and stole from people that lead to the financial collapse in 2008. Nothing has been done to date and they are still practicing the same old policies and strategies and shennanigans to make fast money off the taxpayers and poor dumb asses buying their bad loans through pension investments. They have unlimited capital through our government! Some one needs to put an end to this and as Dylan Ratigan says in his book put the Vici code back into the system and bring innovation back. We have killed innovation in this country through unscrupulous and greedy practices via these banks and wall street brokers. We should all demand justice and this has been swept under the rug and made to appear like it isn't as bad as it is by printing more money through the fed!

If we don't implement sound solutions now and cut off the big banks from unlimited capital through our government then we are going to end up with something much worse than the 2008 collapse. In addition we have allowed these banks to hold us hostage and create the rise in commodities such as gas/food to levels that are insane! Dylan and others give some very good solutions and I for one want to see some of these solutions implemented.

While I gave it 5 stars across the board for excellent topics and delivery, titles like this sometimes suffer from the time lag between when it was published, and when it was purchased and listened to.

Case in point: In the chapter on health care, Ratigan rants on and on about how great the VA Health System is at providing cost-effective health care to our veterans, and how it should be used as a model for care for everyone else in the US. Given what we now know about the corrupt and broken VA system....um, oops....

Now, there was no way Radigan (or for that matter, most of us) could know how broken and corrupt the VA really was/is at the time he published this work (2012). However, his discourse on it borders on comedy given what we now know. So...perhaps the title can be be utilized as entertainment for that chapter and realistic reporting and discourse for the rest.

Very much worth the listen regardless.

Loved the clear explanations which, in some cases, demystified things I'd wondered about for years. Not so thrilled about the author's narration. But that's a small price to pay for such valuable content. I definitely recommend it.

This well researched material explains beautifully the myriad problems leading up to the 2008 financial meltdown. I have read other books on the subject but this one brought it all together such that I had an "aha" experience. It appears that "socialism" is a dirty word in the U.S. but it seems to me that a little more social conscience on the part of corporations would do the country and the world a great deal of good. The meltdown has caused global suffering and Dylan Ratigan is to be commended for his attempt to show how the problems can be tackled and the U.S. returned to fiscal and moral health.

My husband asked me to download this book for him. He had never watched Dylan Ratigan's show on TV but heard him on another program and the book was discussed. My husband is very interested in the inner workings of the government, from when it was formed to present, so this was a good choice. He enjoyed the book tremendously, both the story and narration.

Would you listen to Greedy Bastards again? Why?

What was one of the most memorable moments of Greedy Bastards?

Susie Buffett's information about early brain development and the implications for education.

Have you listened to any of Dylan Ratigan’s other performances before? How does this one compare?

You don't have to listen in one sitting; it's a great audio book while you are doing other activities. Timely information.

Ratigan gets most of it right and says things my much less educated gradfather said and predicted in the early 80s.

Ya Gotta Listen To This!

Where does Greedy Bastards rank among all the audiobooks you’ve listened to so far?

Has to be very near the top.

The information is organized in a logical sequence that allows you to readily absorb and comprehend the history behind the author's treatise.

What does Dylan Ratigan bring to the story that you wouldn’t experience if you just read the book?

The inflection and emphasis on key points.

This book tells it how it is.

What did you love best about Greedy Bastards?

Greedy Bastards is very informative and appears to have a lot research behind it. If you want know the truth this is the book for you.

I like Dylan's up front style holding the listeners interest with facts and commentary. He tells how the,

You learn something from each section of this book as an example the advantages of early childhood education and Warren Buffett's foundation research in the area. He point out how the field of education is being exploited by the,

This is a book that will reward the reader/listener with a better understanding of reality as it is today and the possibility to change the direction we are headed. Both problems and solutions are presented.

Maybe better as a "read" than a "listen"

Maybe I already had a headache...but even if Ratigan's voice wasn't the cause, it surely hasn't helped. The material is great though, so maybe I'll finish listening later with a glass of wine...when the grate of his punching of syllables won't make my ears bleed.

Other than that, I'd give the book itself a big thumbs up.