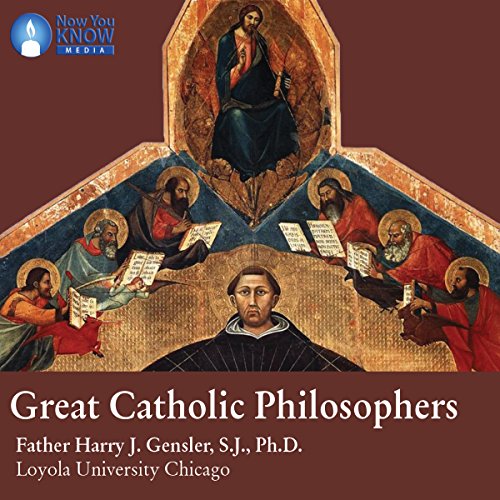 Explore the great minds who tackled the universe's big questions with Fr. Harry J. Gensler, SJ (PhD, University of Michigan), a leading authority on Catholic philosophy and an award-winning professor of Philosophy at Loyola University Chicago.

From antiquity to the Information Age, humankind has grappled with the reality of God, the existence of the soul, and the nature of creation. To ponder these questions is what makes us human. With the guidance of one of Catholicism's most renowned modern philosophers, you can explore how the greatest thinkers of the Catholic tradition approached these questions.

Great Catholic Philosophers is a fascinating and fundamental course that takes you on a journey through two millennia of a rich philosophical tradition. You'll encounter giants like Augustine and Aquinas as well as lesser-known minds whose wisdom will enlighten you in equal measure.

You'll begin with the profound philosophical questions raised by the Bible and by Greek philosophers whose ideas influenced Christian thinkers. After this introduction, you'll move chronologically, seeing how schools of Catholic thought built upon each other throughout the centuries. As you journey through the Patristic Era, the Middle Ages, the Enlightenment, and the modern day, you'll explore questions about prayer, the nature of suffering, and the ultimate destiny of humankind.

Although Catholic philosophers differed in their approaches, they shared common beliefs in God, free will, and morality. Above all, they believed that faith and reason are not competing but compatible. As you meet these great philosophers, you will deepen your understanding of human nature and life's ultimate questions.

Treats topics superficially and mixes his opinions with those of the authors explained. Not good even as introduction. A pity because good books are needed on this topic. However this one disappoints and doesn't deliver what it promises.

As an introduction, this course is very broad but rather shallow. I guess that that’s what is to be expected. I found myself wanting more in many of the philosophers dealt with in this course. Sometimes histories came at the expense of explanations of philosophy. The treatment of the subject matter was less formal than I would have expected for a college-level course. The speaker was somewhat monotone.

I thoroughly enjoyed this series of talks by Father Gensler. It was a very good layman’s introduction to the broad span of Catholic philosophy. I am now getting the book so I can read it more closely.

This book was “Great Catholic Philosophers, supposedly , but it also discusses many other philosophers not catholic or even Christian. He spends too much time on philosophy debate and I would have been happy hearing just what the title says more in depth and dropping the rest. After all, it’s not supposed to be a college philosophy course!