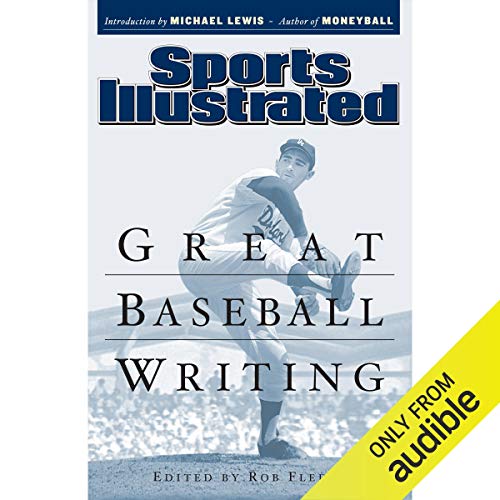 By: Editors of Sports Illustrated
Narrated by: Dennis Holland
Free with 30-day trial

When Sports Illustrated was launched in 1954, baseball was, indisputable, the national pastime, its stars America's epic heroes, its rivalries the era's mythology. As baseballs fortunes rose and fell over the next 50 years - and then rose again to new heights, drawing more than 65 million fans to ballparks in 2004 - the game never failed to produce great drama and inspired storytelling.

This collection is a virtual Hall of Fame from the pages of SI, bringing together the stories of baseball's greatest heroes (Mickey Mantle, Ted Williams, Sandy Koufax) and villains (Ty Cobb, Pete Rose, Denny McLain) and characters (Casey Stengel, Max Patkin, Yogi Berra); its legendary quests (the home run chases of Roger Maris, Hank Aaron, Mark McGwire, and Barry Bonds; the thrilling pennant races, from the Dodgers - Giants in 1951 to the Yankees - Red Sox in 1978); its world-class writers (Frank Deford, Mark Kram, George Plimpton, Peter Gammons, and Tom Verducci) and its own players writing from the inside about their game (Ted Williams, Jim Brosnan, and Jim Bouton).

In the wake of SI's acclaimed Fifty Years of Great Writing comes this baseball anthology worthy of Cooperstown.

the story about the Mark Buehrle's "perfecto" really irked me, I lived it, know all the characters and street names well.

Fun book. Every baseball fan will enjoy it. I didn't mind the reader's calm voice. The material speaks for itself.

Some stories are really great some others lame

I loved the final stories, great for all baseball fans.

Didnt linke his voice. No emotions.

Could you see Great Baseball Writing being made into a movie or a TV series? Who should the stars be?

No its just magazine articles brought together.

I could have started over from the beginning after finishing this book. It got better and better as it went on.

America'*s pastime is one of my favorites. The medium of radio and audio in general give me a vision that to me at least is more vivid then being there can ever be. This book puts you in the place and sometimes into the lives of the legends of our game and some who made it great just by being who they were. This book brings out the stories of players who made the game what it is. Reading this book is like getting a glimpse inside the minds and hearts of those who played and shaped the game.
Though this book has articles written from 1954 to 2004 some of the stories go back in time further then that.
This book will make you appreciate the game we love even more then you do already. In itself the narration is OK but should not be a factor in your choice. The information contained in the book should more then make up for the short comings of the narration. Those of you who write these reviews sometimes insist on telling us about a favorite piece.
That would ruin the greatest quality of this book. That is you never know what is coming next .

SI's Great Baseball Writing has plenty of good material from its vast archives. Unfortunately, the narrator drones on in a monotone that hardly matches the style and excitement of the material. I'd love to see Audible get people like Buster Olney or Tim Kurkjian, who have a real passion for the game, to narrate their baseball books.

From Babe Ruth and Ty Cobb, to DiMaggio, Mays and Jackie Robinson, to Koufax, Aaron, Ripken and Vladimir Guerero. Over 25 shirt stories of baseball legends.

A Must For Baseball Fans

I love baseball and I love good writing, thus I’m a big fan of this book. I’ve listened to it three times and also bought a print copy for my dad. Any true fan of the game will definitely appreciate this book.

Many, perhaps all of the criticisms I read for this title were at the narrator. His voice was not rich in tone, of superior cadence, or of especially moving inflection. Holland is ordinary, but the book was all the better for it.

These stories stand on their own. They don't need a powerful narrator, all they need is for the listener to have a love of baseball, the desire to know more about the game. In time I think you'll appreciate, and even love Holland's narration, because it's ordinary, because it's real. Because it's baseball.

This book is amazing from start to finish it covers most of the history of baseball and tells som brilliant stories. The narrator is spot on as well

Captures the essence of the game over several decades. The stories are beautifully written and the narration is note perfect.

For someone whose knowledge of baseball pretty much began and ended with Gary Cooper in "Pride of the Yankees" this was just what I was after.

Baseball to the US is like cricket in the UK, in that beyond its status as great sport it occupies a certain place in the texture of American life. I love so much about the USA and its culture that I felt that I was missing out by not knowing more about it.

From the history of Cracker Jack to an account of the Steroid Era and learning just where the "Louisville Slugger" came from (not a infamour serial killer it turns out!) I have been able to fill in many gaps. Now I can call the balls and strikes with the best of them and if I am not likely to be visiting Cooperstown anytime soon I could probably hold down a shaky conversation with a genuine baseball fan (well, for a few happy moments at least before discovery).

The reading of this book is fine, in a nice, easy to listen to, American accent. Glorious length too, and great to put on during housework or decorating as a background listen.